Not a question I know much about, but let me take a stab, and see if someone more knowledgeable corrects me.

The Wikipedia article on Constantine I goes on to say:

The capture of Thessaloniki against Constantine’s whim proved a crucial achievement: the pacts of the Balkan League had provided that in the forthcoming war against the Ottoman Empire, the four Balkan allies would provisionally hold any ground they took from the Turks, without contest from the other allies. Once an armistice was declared, then facts on the ground would be the starting point of negotiations for the final drawing of the new borders in a forthcoming peace treaty. With the vital port firmly in Greek hands, all the other allies could hope for was a customs-free dock in the harbor.

In this scenario: Bulgaria takes Salonica, and Greece takes a good chunk of (FYRO) Macedonia. In real life, Bulgaria then went to war with Serbia and Greece in the Second Balkan War, dissatisfied with how much territory it had gotten, and Serbia thought that Bulgaria was reneging on the deal they had before the war on what would happen next. 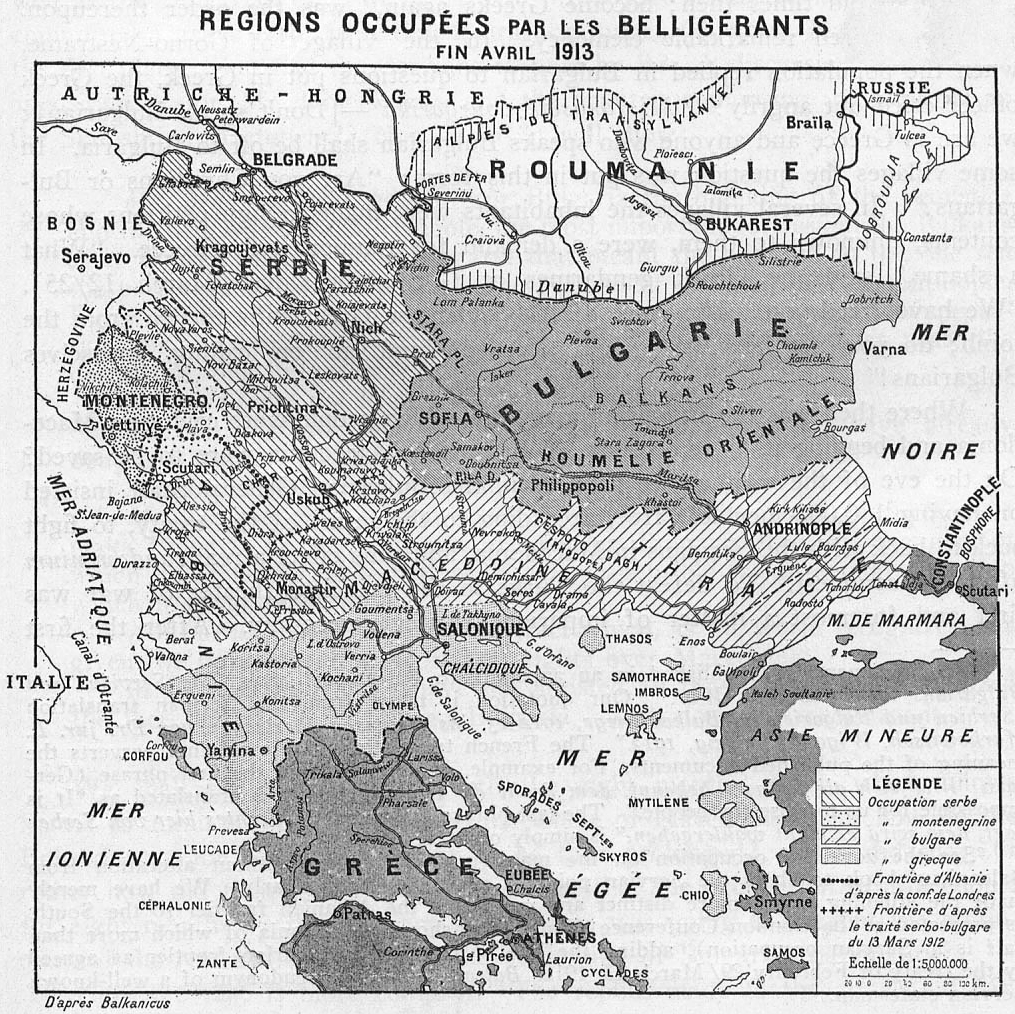 Balkans after the First Balkan War. Bulgaria has gotten a lot bigger than it was later. In our scenario. Constantine I takes Monastir, and loses Salonique in the process.

Greeks having Monastir and not having Salonica spells even more trouble. I would surmise that the Second Balkan War becomes a three way war rather than a two way war. Any deal between Bulgaria and Serbia would be off. Serbia may well feel more of an imperative to protect the Southernmost Slavs, as Greece is now a lot closer to Skopje. Greece can’t be happy with Bulgarians in Salonica, especially as this likely means even more ethnic Greeks under Bulgarian control (Chalkidiki, as well as Eastern Rumelia).

In the ensuing free far all, Bulgaria is at less of a disadvantage: it may have retained Western Thrace, and it may even have ended up taking a big chunk of Vardarska Macedonia—which would end up with all of geographic Macedonia being Bulgarian.

I dunno. You tell me.

Not because I have any love for Python. I’d be happy to chain Larry Wall and Guido van Rossum together: each other’s company would be punishment enough.

Then get familiar with the techniques of Natural Language Processing. Which you can do via the Natural Language Toolkit. You’ll want to get into stemming. And lexical databases. And if you’re wanting to replicate what Google Translate does, statistical machine translation techniques.

By which time, you’ll have more targeted questions, which better informed individuals can help you out with.

We will never find out.

My father conducted a scientific experiment at 19, to determine his answer to this question. He vaguely remembers passing out.

My control issues are much too deeply embedded for me to recapitulate my father’s empiricism. Once I realise that I am affected by imbibing booze, I get annoyed enough at the impending loss of control that the imbibing ceases. Even if it involves quite yummy cocktails, as my birthday degustation on Monday did.

The limit is I think 5 shots’ worth.

The symptoms only get as far as me being slightly more voluble than usual, and an incipient wooziness. No room spinning or nausea or anything like that.

My threshold has dropped since my twenties too. I was capable back then of downing a Long Island ice tea. Already by 35, I was struggling with half of one.

je ne parle point Français. But you can have a recording anyway. Especially because I suspect I sound like your worst Languedocien nightmare…

… you’ve finally got your third recording out of me. (Or is it fourth?)

Neeraj Mathur is quite right: syllables, not letters. Some circumstantial evidence for this from Ancient Greek drama. When literacy was a very new thing, and the tools of grammatical analysis (such as words) were still not very popular. (https://www.quora.com/Could-sayi…):

the differentiation between utterance and word was newfangled with the Greek sophists. Aeschylus avoids Euripides’ new fangled distinction in Aristophanes’ Frogs, and sticks with the time-honoured epea, “utterances”—which could be as short as an ouch, and as long as the Iliad.

And the old-timer Aeschylus, who did not want to know about Euripides’ newfangled words, does speak of syllables, and graphemes, and NOT phonemes. Seven Against Thebes, 468:

“This one, too, shouts in syllables of written letters (grammatōn en syllabais) that even Ares could not hurl him from the battlements.”

Letters in Greek are literally “written things”: grammata. You shout in syllables. Aeschylus knows that multiple grammata correspond to a syllable. But he hasn’t quite made the leap to one gramma corresponding to one phoneme—even though that’s why distinct letters exist to begin with. Even if you interpret syllabē as “bundle”, you don’t sound letters out separately.

Plato, it’s fair to say, uses phōnē “sound” to refer to vowel sounds as distinct from consonants. So there was the beginnings of an awareness of phonemes in Greece; after all, their alphabet was phonemic. But my hunch is still that it would be Zer-kes’ vs Zer-ges’ new cave, not Z-e-r-k-e-s, that syllabising rather than phoneme-ing was the default.

Btw, in Modern Greek, syllabising combines with phoneme-by-phoneme spelling. The informal Greek alphabet is vowels, and consonants followed by /u/. So Zu-e-ru-ku-e-su (instead of Zeta Epsilon Rho Kappa Epsilon Sigma).

These answers are kinda converging. My answer is:

I was reading some Old French out loud one day two decades ago, while doing my PhD. And I turned to my bolshie (literally) fellow PhD student, and commented “hey, Old French actually sounded quite nice”.

“Yeah,” he snarled. “Before it picked up all that froggie shit.” 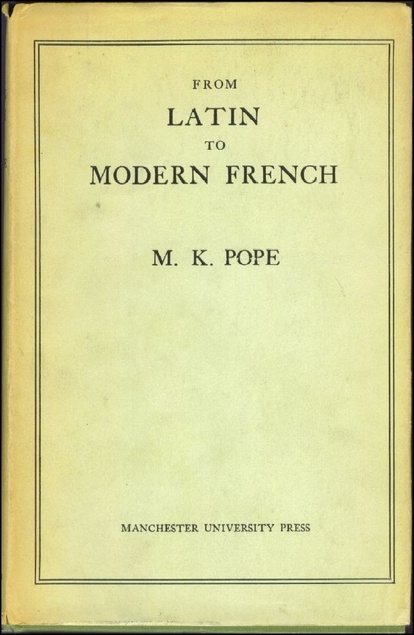 aka: How French got all its Froggie Shit.

I wished, my A2A’er and True Quora Master Scott Welch, to give you a well-informed theologically-based answer to this question.

So I googled: “Satan does not”. Because there’s a lot of things that Quora moderation does not do.

I got this from the Agape Geek blog as my first Google hit: Six Things Satan Doesn’t Want You To Know About Himself

1. Satan DOES NOT Want You To Know That He Exists

2. Satan DOES NOT Want You To Know How He Operates

3. Satan DOES NOT Want You to Know that He Can’t Be Everywhere At Once

4. Satan DOES NOT Want You To Know That His Time Is Short

5. Satan DOES NOT Want You To Know He Was Defeated

6. Satan DOES NOT Want You To Know That You Have Authority Over Him

We appreciate that you’ve contacted us. We will review your inquiry as soon as possible and reach out to you if we need any more information.

Since we are a small team, we don’t always have time to respond to all our emails, but we do read and appreciate every email we receive, and we’ll make sure to pass along your thoughts and ideas back to the team

Others on this thread have spoken to their impostor syndrome. I won’t answer with that: we are all, as Michael Masiello once put it to me, broken toys here, which correlates with us falling into our knowledge rather than training for it.

I don’t say anything online I’d be ashamed of (including for this question); but then again, I tend to be an open book, both in person and online. In person perhaps less than I used to be.

People on Quora have been surprised about stuff I know that I don’t post about much. My day job being in education technology (h/t Scott Welch), for example, or that I program a fair bit, though not necessarily well (h/t Miguel Paraz).

People have also been surprised about my age. As of yesterday: 45. I certainly don’t act it, and I don’t plan to.

Yes, I’m going to have fun with this.

First: HAH! You’ve outed yourself as a Modern Greek speaker, Anon OP! In ancient Greek, that would be ἀέναος σοφία. Compound adjectives used the masculine ending for the feminine; and αέναη is what you get when noone you know has been aware of Greek vowel quantity for the past two millennia.

Yes, as Dimitra Triantafyllidou and Konstantinos Konstantinides have said, the adjective means “ever-flowing”, from ἀεί “always” and νάω “to flow”: first attested in Pindar and Herodotus. Used of rivers, lakes, the river Acheron (Are there any Greek towns built along the Acheron river in Greece?); and God bless, Aristophanes had to go and invert it, and use it of bogs and shit (Frogs 146).

Looking at the metaphorical uses of the adjective listed in LSJ. They started early: you have

So use to refer to wisdom sounds entirely plausible. And in fact the phrase ἀέναος σοφία is used by several theologians:

So many instances still make the metaphor explicit, between ever-flowing water and perpetual wisdom; but the earliest instance in Philo doesn’t, and the metaphors with other abstractions, such as glory and power, were well established already.

So. We’ve established that ἀέναος σοφία for ever-flowing wisdom is an established expression. Now to Magister Michael Masiello’s query as to whether “ever-flowing” is the right rendering of “perpetual”.

Etymology is “ever-flowing”. The association with rivers and seas and springs is explicit throughout Byzantium. That’s not unchanging eternity, that’s continually renewing perpetuity. So yes, it is perpetual and not eternal.

Ink away. Philo himself wouldn’t approve the tat (Jewish Orthodoxy is funny about body markings); but his Greek does.