You know how Quora questions are really just an excuse for us to write interesting stuff?

This is how this answer came about.

I was reminded of this question, and Konstantinos Konstantinides’ answer, when I used the phrase with him today. I went googling, because the account given in his link didn’t sound convincing: it didn’t have any specifics to it.

I’ve found enough in the following link to corroborate it, and it’s such an astounding story, that I’m using this question as an excuse to share it.

So, Konstantinos’ answer says that Greeks would curse a bad event by throwing black stones at the site where the deed happened, with their backs turned. They would ritually curse by saying “anathema” as they cast the stone, and the pile of stones itself would be called an “anathema”, or an “anathematistra” (an anathematiser).

Hence, if you’re cursing a place, and vowing never to set foot in it again, you might as well be throwing a black stone at it, behind you (as you turn your back on it and leave it).

It’s December 12, 1916. Greece is split between its pro-German King, and its pro-Entente Prime Minister Eleftherios Venizelos, who is about to enter Greece into WWI on the side of the Entente. Venizelos has just declared a coup against the King, and has set up his own government in Salonica. There has been armed conflict between French and Greek troops in Athens in the previous week. Greeks refer to this time as the National Schism. The supporters of the King in Athens are livid.

Livid enough to head down to the the open space which is now the Pedion tou Areos, Athens’ “Field of Mars”, featuring a sculpture of Athena.

Crowds of royalists gathered at the Polygon with black banners, “each bearing the stone of anathema, holding it in their hands, arms, or shoulders. Wherever there was a stone to be found, regardless of size, they grabbed it. An unending row of carts with hills of stones is being dragged towards the Polygon.” And some of those carts were dragged along by enterpreneurs: “Five cents a white stone, ten cents a black stone!” (Which corroborates that black stones were valued in making the curse stick.)

Someone eventually brings an effigy of Venizelos along, whereupon people start giving the insulting Mountza gesture, and throwing stones: “Anathema and a curse upon the traitor!” “May the earth reject his miserable corpse!” 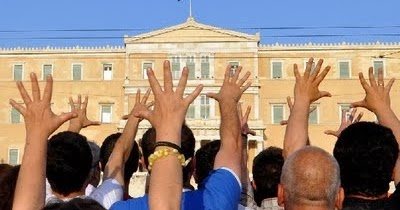 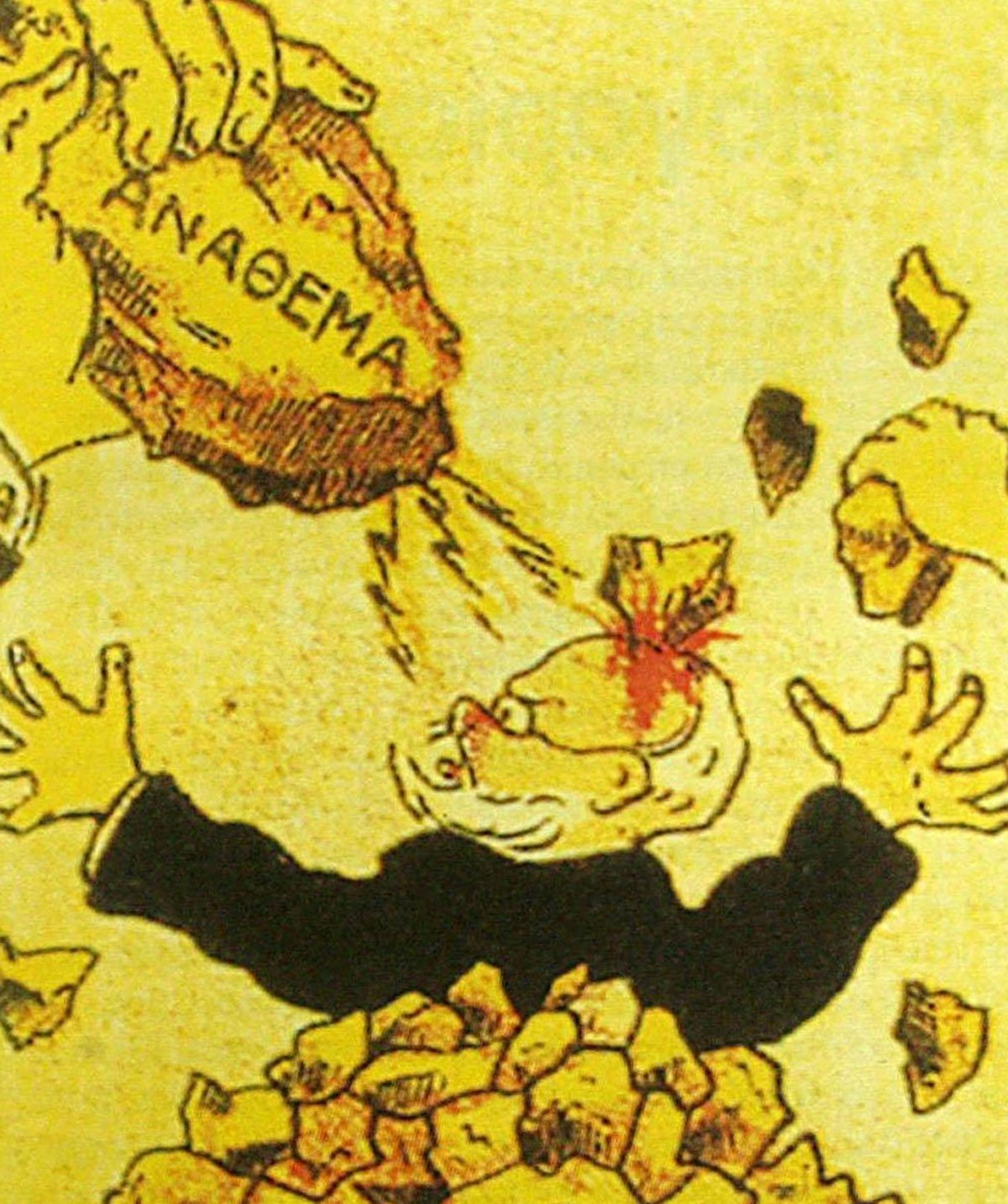 A contemporary cartoonist wishing Venizelos himself was on the anathema pile.

The Archbishop of Athens saw fit to turn up, and cast either a single stone, or four stones to the four points of the horizon, chanting “Against Eleftherios Venizelos, who has arrested archpriests and plotted against Crown and Country, let there be anathema.”

By the next day, Venizelos’ anathema pile looked like this: 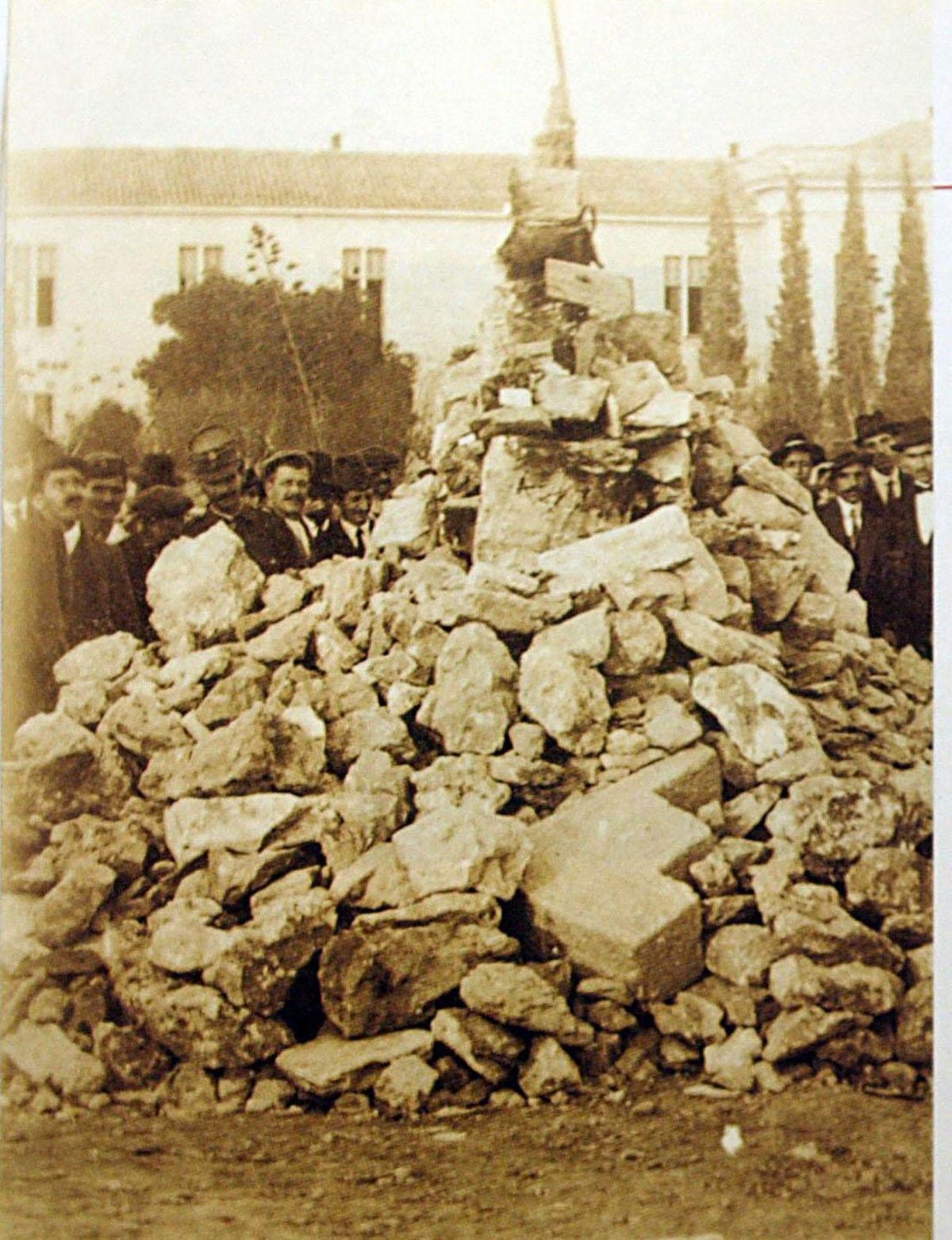 When Venizelos came back to Athens in June 1917, the anathema pile was still there, with furtive flower offerings left at night. Venizelos wanted the pile left there. “I do not want the proof of the anathema to be lost! I’ll put guards there! The stones should stay as they are, so that passers-by can see them and understand how vain and foolish Church curses are!”

“But,” the ex-mayor of Athens retorted, “this is ugliness right in the middle of the Field of Mars.”

“We’ll just have to put up with that ugliness, Mr. Benakis. We’ll put up with it for the instruction of the people: they should learn both what the Church’s curse and the Church’s blessing is worth, when the Church is conscripted by political animosity.” 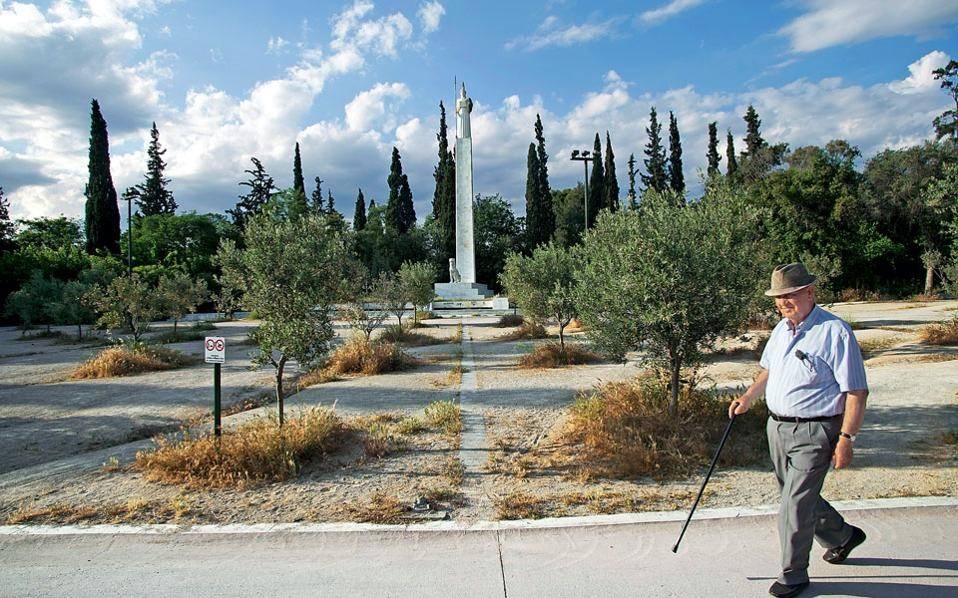