Just got this misfeature in my feed today.

I know why they’re doing it: they’re explaining, more prominently, why an item has shown up in your feed. Because items show up for social networking reasons, they’re emphasising the social network connections back to you (the follower, the commenter, the topic) over the author. Because, apparently, now the UI team has decided Quora is social media after all.

Yes, I think it’s as idiotic as all the other continuous and never-ending tweaks to the UI. If there’s meant to be a difference between header and footer information, this is obviously less important information that belongs in the footer. Less important than WHO WROTE THE ANSWER, FFS.

And using the same icon for commenting and writing? When I have to squint to make out the author icon to begin with? Really?

There have been, like, two changes to the feed in the past year that have improved my experience. This is yet another one that hasn’t. I do want to know why an item is in my feed. And this was not the way to do it.

EDIT: in the latest iteration, the relative sizes of the icons are more sensible.

Was it my unhumble contribution that led to this reversal? Ah, who can tell…

Why has Quora changed the feed layout to show the icon of the topics above the question (October 2016)?

The motivation, I guess, is to foreground the topic classification of feed items over all other aspects of the item.

I would have rolled out a variant of this, where topic icons appear only over questions.

The topic icons are the least noxious aspect of this current variant.

Quora’s comments are much, much better. Both because of more well-thought-out methods of enforcement, and because Quora is a smaller platform upon which to attempt meritocracy.

In addition, for all that Quora likes to distance itself from being social media, it’s more social than YouTube. Following and exchanges are built in to the fabric of Quora much more than YouTube, where interactions are pepper spray. So there are less social repercussions on being an arsehole there; the absence of BNRB enforcement on YouTube is a symptom, not (just) a cause.

And, again for all that Quorans often differentiate answers and comments, answers and comments are part of the same fabric on Quora: exchange of ideas. On YouTube, the point is the broadcasting of media; it’s democratised, but it’s only occasionally two-way. The comments are not part of the same fabric, they’re more incidental. So they don’t attract much care and thought to begin with.

That said, YouTube’s much larger size would defeat any but the most numbskulled attempts at moderation.

What Yonatan Gershon said in his answer:

I give you free reign to be an asshole, until you abuse that privilege.

I hate blocking and deleting comments. As I’ve said elsewhere (hello Clarissa; yes, Jae, I did finally give in and follow you), I know that it’s easy for me to take that attitude when I’m privileged.

But I’m an irenic, conflict-averse kinda guy, when it comes to topics other than comment blocking. And I’ve been online for 25 years: I’ve seen it all.

In making sense of my responses to comments, bear in mind what a Greek once said of me: “picture a Greek greengrocer, who’s culturally British”. A Brit not responding to you is the equivalent of a Greek running at you with a pitchfork.

In my twenties, I was like Jordan. Silence unnerved me. I sought noise. I made noise. I was loud. Sunday nights, when it was deadly quiet as I was working on my PhD, I would put on the community radio Metal show, because I couldn’t deal without noise. (And not because I had any idea what constituted good Metal.) When I moved to the States, I’d spent late nights at Denny’s, so I wouldn’t be alone in the quiet. Music constantly. TV as a comforting buzz in the background.

In my forties, I’ve turned into McKayla. I feel refreshed if I spend a couple of hours staying back at work, with just stillness and quiet and nothing around me. Background music makes me antsy. I rejoiced at the ongoing buzz of Greektown, till 1 AM, when I moved here; seven years on, I stay the hell away from it. I feel at my most euphoric if I’m walking home late at night, in absolute stillness. I don’t particularly seek out music much any more.

Oddly, my neurological situation these days is probably closer to Jordan’s than McKayla’s (something I’ll post about… maybe later). So I’m not sure what the explanation is. But it really is recent; last 3–4 years. 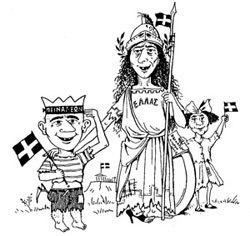 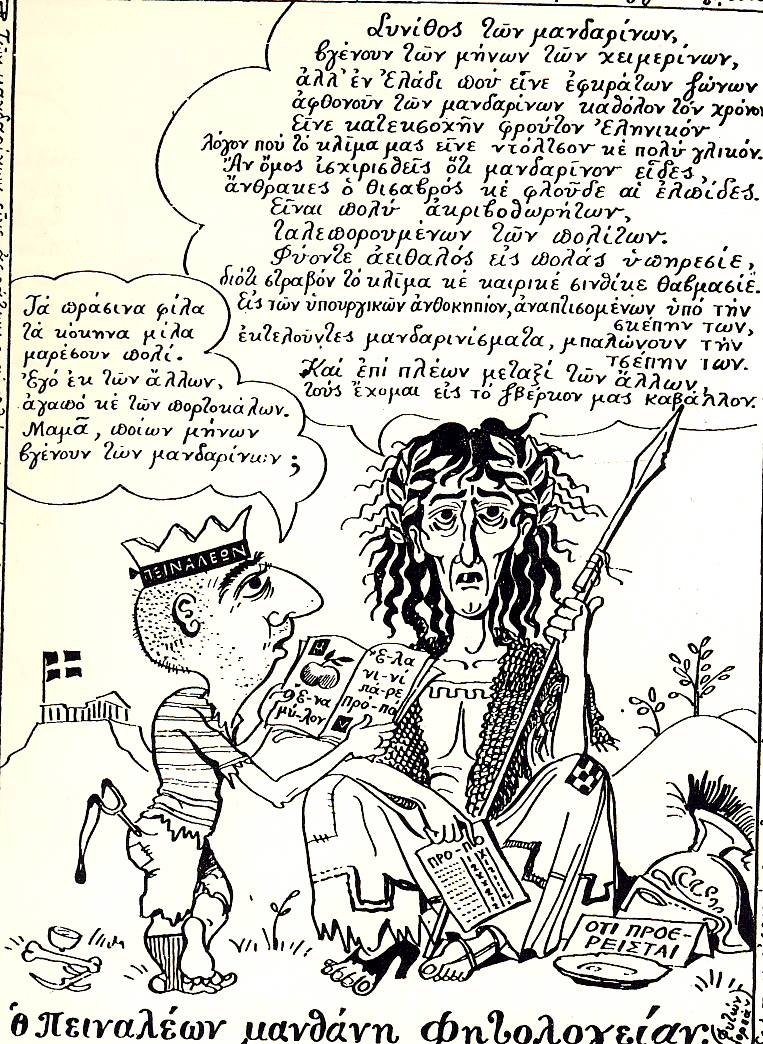 Although the contemporary blog Psorokostena has adopted a homelier figure: 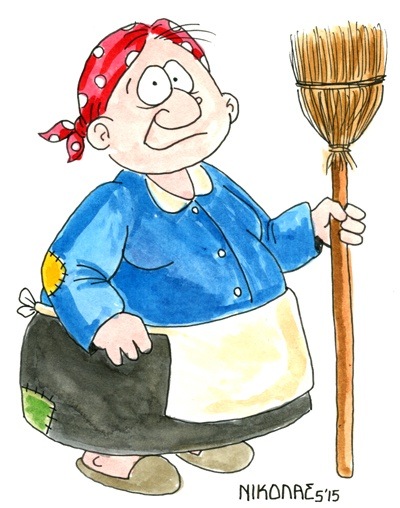 The story of the historical Kostas’ Mangy Wife is one I didn’t know until today, and it’s… well, it’s sad: Ψωροκώσταινα

Panorea Hatzikostas (feminine form of surname Hatzikostena, though the suffix usually attaches to a husband’s given name) was a refugee in Nafplio from Ayvalık, during the Greek Revolutionary War. In 1826, she gave up her last belongings to fund the Greeks in the Third Siege of Missolonghi. Her gesture inspired the admiration of her countrymen.

Which would be a Good Thing, right?

But then, the meaning… evolved. As the Greek Wikipedia puts it,

“Kostas’ Mangy Wife” refers to the Greek State as a poor country, relying more on volunteer contributions and efforts by its citizens, than on the proper and well-thought out organisation and administration of its funds.

“Kostas’ Mangy Wife will pay for it” meaning that the Greek people will be unjustly forced to pay for expenses incurred by the actions and omissions of the governing class.

Erroneously, the expression “Kostas’ Mangy Wife” is used to describe a poor country, with no sources of revenue, doomed to eternal impoverishment. [citation needed]