Kissinger undermined Rogers at every opportunity because he was profoundly insecure. Kissinger would yell at anyone available (quite often Haldeman) for hours about slights, real and imaginary. The story of Kissinger’s time as National Security Adviser was a story of constant tussling with Rogers, and making sure Rogers was kept in the dark.

Nixon initially undermined Rogers so that the White House, not the Secretary of State, would have control of foreign policy, which was all that he really cared about. It’s why he deliberate chose a former business partner who knew nothing of foreign policy. Of course, once Kissinger became too big for his boots, Nixon found he needed to undermine Kissinger too, and very rarely he would side with Rogers against Kissinger.

It’s an awful question to pose, to pick just one (or even several). I’m forcing myself to limit myself to five:

The first four Mahler symphonies are called Wunderhorn symphonies for good reason: they all draw inspiration from songs in the Des Knaben Wunderhorn collection, including quotations or rearrangements of song settings that Mahler had done.

That correlates with the structure of the Wunderhorn symphonies, contrasted with his later work: more songlike, more scene-painting, more focus on single musical ideas, more overt programmes. The later works, the 5th, 6th, and 9th, are greater (not by far), and certainly more sophisticated, but the first four are more accessible. Which makes it easier for them to tug at the heartstrings.

Mahler never wore his heart on his sleeve as much as in the Funeral March of the 1st. He probably intended nothing Klezmer about it—he thought of the band as Bohemian, rather than Jewish, and his mental picture was about a band marching in and out of earshot; but the simple melodies and violent clashes in mood have a special resonance for me, one that the Yiddishkeit of the march (from our post–Austro-Hungarian perspective) enhances.

And the bit that gets me crying without fail is the yearning for heaven in Urlicht, from the 2nd symphony. Again, because of the contrast—in particular, the contrast with the cynicism of St Anthony’s Sermon to the Fishes, which precedes it, and swallows it up afterwards. 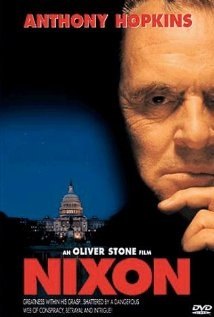 It may be an eccentric choice. It may be the choice of someone who does not understand film at all. But it’s my favourite movie. Grand Shakespearean tragedy, operatic, intense, cinematic tour-de-force, encompassing the world like a Mahler symphony. And not that this matters anywhere near as much to me, but historically more accurate than you might think.

A surprise, because the biopic is justly maligned as an incoherent and/or formulaic genre; but Stone had great subject matter.

I had little time for Natural Born Killers or The Doors, so falling in love with Nixon surprised me too.

Fun fact: on my first date with my future wife, when we were in the infuriatingly cutesy stage of identifying common interests—

—Me too! What your favourite cake?

… and when it came to favourite movie:

Only by Nixon, Tamar did not mean Oliver Stone’s Nixon. She meant Frost/Nixon (film).

And Frost/Nixon is in many ways the anti-Oliver Stone’s Nixon. It’s intimate, focussed, stagey, and somewhat conventional; a chamber piece.

We’ve watched Frost/Nixon together, and we’ve watched Oliver Stone’s Nixon. (For limited values of “we”.)

I guess we’ll always have Vienna…

I’ve already answered a related question from a linguist’s perspective: Nick Nicholas’ answer to What makes Modern Greek an interesting language to learn, from a purely linguistic point of view?. But this question really should be about a lay description.

(But I can’t resist telling Ilir Mezini: it’s Albanian, missing half the letters, and with even more Greek words in it. 😉

Modern Greek is a historical battleground, caught between its ancient heritage, and its more recent, variegated past. Lots of texture and hidden battles in there, of which only some have been resolved, and many have been resolved only recently.

It’s a staccato, rapid fire, impassioned language—although you should listen to some regional accents; Cretan and Cypriot are pleasantly sing-song, in different ways.

And of course I will use the Cretan Muslim village of Al-Hamidiyah in Syria to illustrate. Contrast the intonation of the journo, straight outta Athens, with the locals’:

As Indo-European languages go, it has rather more grammar than you’re used to, including some entrenched randomness in the verb system (sigmatic vs asigmatic aorists), random genders, and an accusative and genitive.

Compared to Classical Greek, it is drastically simplified, and the simplifications mostly are rather sensible. Although a classicist I once asked did say it looked like a drunk Ancient Greek.

If you speak a Balkan language, as I alluded above, a lot of its syntax, idioms, and morphology will look rather familiar.

Eh, do you have to actually understand Farsi?

Thanks to http://alefbaye2om.org/tools/tra… (and we all know how reliable an online dictionary-based transliterator will be with an abjad and a millenium-old text), I have… attempted the following.

This… will be interesting.

Dexterity in playing a musical instrument is all about muscle memory, not looking at the fingerboard. After all, you’re meant to play the violin while reading a score. And the fingerboard is in a rather awkward position to be staring at all the time anyway.

So, if there is no score around to be read, having your eyes open or closed doesn’t make any difference to how you play; and having your eyes closed helps with concentration, and figuring out what you’ll do next.