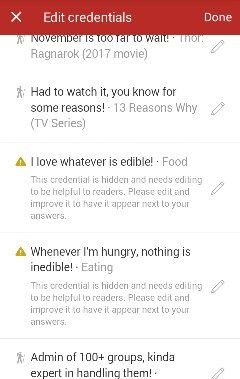 The Quora Credential Bot doesn’t notify you that it doesn’t like your credential; it just preemptively hides it, and users typically end up stumbling on this alert. Especially confusing, when it applies to bios that predated the introduction of Credentials (Show your expertise with credentials by Jackson Mohsenin on Quora Product Updates). The yellow triangle is only visible by you, since it is an indication that Quora is suppressing that credential, and picking some other credential out of your list.

See many related questions, such as

And then, for jollies, read the Quora design team’s post mortem on how the new Credentials rollout went:

Designing Your Own Metrics by Jackson Mohsenin on Quora Design

This metric represented our goal much more clearly than counting the total number of added bios did, and in fact, when we tested the entire Credentials package towards the end of the project, we got less total Bios but more helpful Bios compared to the previous system.