Cutting to the chase:

The default answer is that English words are spelled differently because they used to be pronounced differently, just before English spelling was fixed in aspic with the invention of printing (inconveniently timed to partway through the Great English Vowel Shift).

In Late Middle English, there was [ðeːɹ], which is not a million miles away from its current pronunciation; but their was [ðæiɹ]. (Or at least, that’s what squinting at Middle English phonology for ten minutes tells me.) <ei> in their was written as a diphthong, because it used to be a diphthong, all the way back to Old Norse þeirra. And <e> in there was written as a long vowel (through the final <e>) because it used to be a long vowel, all the way back to Old English thǣr.

If the two words had happened to have ended up sounding the same before, rather than after, spelling was standardised, they likely would have been spelled the same. That’s unless the ambiguity was so intolerable that one of them would end up changing into a different word anyway; but languages are remarkably tolerant of homophony.

For example, Old English has a verb lætan meaning “permit”, and a verb lettan meaning “prevent”. They ended up sounding the same at a time when English spelling was reset (no continuity between Old and Middle English spelling). And in fact let in Middle English did mean both “permit” and “prevent”; it was only more recently that the “prevent” meaning of let (as in “without let or hindrance”) became obsolete.

It takes a Norman Invasion or an Atatürk to reset the spelling of a language so completely. If that hadn’t happened, you’d have likely seen laet and let pronounced identically and spelled differently, to keep continuity with Old English, and not just Middle English. But that kind of reset is the exception, not the rule. And I’m talking about wholesale resetting of the orthography, not the gradualist, consensus-seeking projects listed in much of the Spelling reform article.

Answered 2015-12-03
[Originally posted on http://quora.com/Why-are-there-and-their-spelled-differently-despite-being-pronounced-the-same-way/answer/Nick-Nicholas-5]
Malbin’s the maos livable ciddy n the world (we keep broibin the Economist tuh sigh that), an that’s the wigh we loik it. Tüü roight! We love the pahks, we love the fooddy, we’re all füüdies n coffee snobs, an we’re praodly multikulchrul. Even bogans av picked up on the café kulcha down ere. Yeahr it gets muggy sometoimes an the weathuh cn get  derro, bud a leas’ it’s not Synney—or Gawd elp me, Brizzie! An we daon tawk funny, loik the Poms Oi seen wroitin ere. Mite, zat wot youse cawl the Queen’s English?

(God forgive me, I really am supposed to know better than that.)

* They talk funny.
* They drive on the wrong side of the road.
* They forget to mention them a lot of the time. (I’ve done that myself in a Quora answer.) See America–Canada, Australia–N.Z., etc.

* They talk like penpushers. (Because they speak standard Greek. In fact that’s their nickname for them: καλαμαρά(δ)ες. Or if they’re feeling particularly aggrieved, πουshτοκαλαμαράες, “faggot penpushers”.)

Someone else who currently lives in the area, please jump in.

Updated 2015-12-03
[Originally posted on http://quora.com/What-do-Greeks-of-Greece-and-Cypriot-Greeks-think-about-each-other/answer/Nick-Nicholas-5]
This graphic from Varieties of Modern Greek has been used around here before: 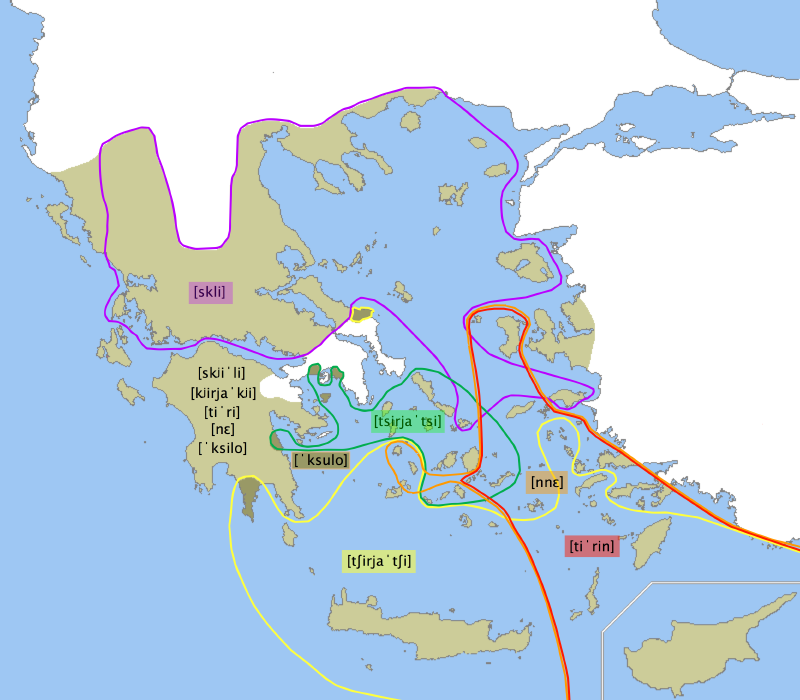 The main difference is phonological. It’s one difference, but it’s a doozy (purple line): unstressed /e, o/ are raised to /i, u/, and unstressed /i, u/ are deleted. That makes Northern Greek sound at best silly to Southern Greeks (though their attempts to imitate are as unsuccessful as you’d expect). If you add some more phonological changes on top, you get something like Samothracian Greek, which is not comprehensible at all.

Some morphological differences: Northern Greek avoids the genitive much more, and has some different inflections. Not much in the way of lexical differences.

The Northern/Southern distinction is the oldest distinction made between Greek dialects, introduced by Georgios Hatzidakis in the 18mumbleties. (1880s?)  I hold with Kontosopoulos’ proposal in 1983, that the really important distinction in Greek dialect is Western and Eastern—or to use terms Greeks might be more familiar with, Mainland and Islander.

Answered 2015-12-03
[Originally posted on http://quora.com/What-are-dialectical-grammar-or-morphological-differences-between-modern-Northern-Greek-and-Southern-Greek/answer/Nick-Nicholas-5]
Intellectually, I want to love it.

Regrettably, being human, I freak out. Not much, just slightly, Uncanny valley-style.

Ross Daly for example is an Irishman who has lived in Crete for four decades, and a practitioner of Cretan folk music (among others). Having gone to the Cretan highlands to learn Cretan music, he speaks Greek like a Cretan highlander. And when he is interviewed on Greek TV, my reaction is… something… is… wrong here…

Like I say, intellectually, it is beyond awesome that an Irishman speaks better Cretan dialect than I can ever hope to. But the reptilian brain is tuned to using accent as an in-group marker, and it finds it jolting to see the clash between ostensive ingroup and outgroup characteristics.  Like Patrick Edwin Moran said: “orange” written in purple ink.

And yes, I have the same reaction when I see the kids of African immigrants speaking idiomatic Greek on TV. And no, I am not intellectually proud of that.

I was much cooler about the Japanese PhD student whose Australian English accent was impeccable, even though she learned English as an adult. Partly because it was obvious what was happening: her accent was identical to her PhD supervisor’s, down to the intonation. (It was, after all, a phonetics PhD.)

I’ve inflicted that Uncanny Valley reaction in reverse, so that’s karmic revenge for you. I was speaking to a gelati seller in Lake Gardo, in my cod Italian, only to be asked “have you come from Friuli?” She could work out that I wasn’t from around there—so she assumed I was from the next district along. (The one that doesn’t speak Italian. 🙂

Depends, as with many of these things.

Yes, there is the reaction you mention. You will occasionally get Greeks (and non-Greeks) reminding you that the Roman Empire kept going for 1000 years after 476, thank you very much—though the relation of Greeks to Byzantium is more complicated than that.

There is the haunting feeling that we’ll never measure up to the ancient Greeks (one that the Byzantines shared).

There’s the reaction against that, with “we’re sick of hearing about the ancient Greeks”. You won’t get much of that aired to non-Greeks, but if you google  Αρχαίοι Ημών Πρόγονοι (“Our Ancient Ancestors” in Katharevousa) and can translate what is being said, much of it makes fun of Greek ancestor-worship.

It’s a profoundly ambivalent relationship. The unlettered peasants 300 years ago had a much more straightforward relationship with the Hellenes: they were this race of pagan giants, the folk who built all them ruins; and they died out because they fell over, and couldn’t get back up…

EDIT: See also Do many modern Greeks feel a sense of failure or perhaps inferiority when compared with their ancient Greek ancestors? (where I say pretty much the same.)

Updated 2015-12-03
[Originally posted on http://quora.com/How-do-Greeks-feel-about-references-to-Ancient-Greece/answer/Nick-Nicholas-5]
My dad had to learn a bit of Turkish when he was working as a nurse in the (very) early 60s. By and large, no. I understand that in the past, a lot more Turks spoke Greek than Greeks spoke Turkish…
Answered 2015-12-03
[Originally posted on http://quora.com/Do-the-Cypriot-Greeks-speak-Turkish-and-vice-versa/answer/Nick-Nicholas-5]
The Middle English Dictionary Needs a Fucking Update: earliest attestation 1310, but it must have existed earlier. (Met the blogger 20 years ago, glad to see he’s kept the faith.)