Bless your cotton socks, my confreres in Albania and Czechia!

As of this writing in 2017, I’m not planning a trip to Europe soon; gotta save up for a house move, gotta tow that barge, and given where we live and our predilections, our next holiday is likely to be Hawaii. I suspect there’ll be a visit to at least some of Europe two or three years down the road though… 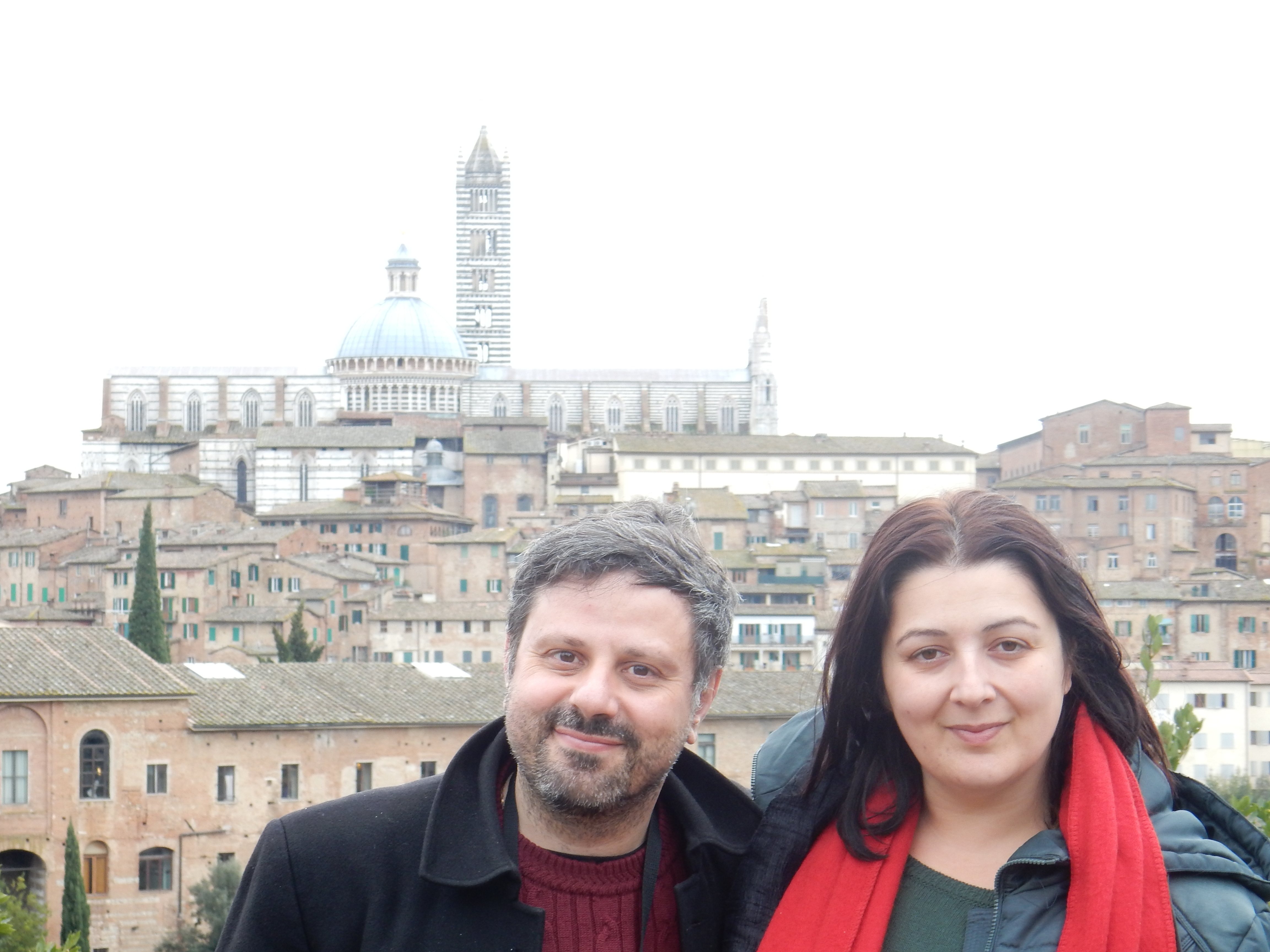 I am somewhat surprised to have been A2A’d this by four people. That my politics should be of interest at all, though I haven’t expressed my politics here coherently, is likely more a token of their esteem than my interest.

I am somewhat mortified to have been A2A’d this by four people. Unlike the other answers here, I have not distilled my politics in the crucible of texts and reflection; I’ve inherited tribal politics, identified axioms, and drifted accordingly.

I am somewhat grateful to have been A2A’d this by four people. The Decalogue of Nick was stalled at #8, my politics. So I get to write that here.

I come from a long line of Greek peasants, on both sides. The Left in the Grecosphere did not make social progressiveness its main rallying point (though that is there); the Right in the Grecosphere had no equivalent of the American Dream, to seduce the entrepreneurial poor. There are regions in the Grecosphere that are die-hard right-wing anyway; and they are not where my parents are from.

My father tried to be a union organiser as a nurse, before he was intimidated out of it by management. He kept a belief in social justice, but also a reticence which his boisterous brothers-in-law could not understand. The household was broadly socialist in Greece, though with a touch of cynicism that I was too young to identify.

1981 was a heady time to be a kid in Crete. Our apartment was across the road from the Socialist Party headquarters, blaring out Theodorakis and Loizos anthems: “This soil is theirs and ours”, “We’ll get the sun drunk”, “We took our lives the wrong way, and we changed our lives”. 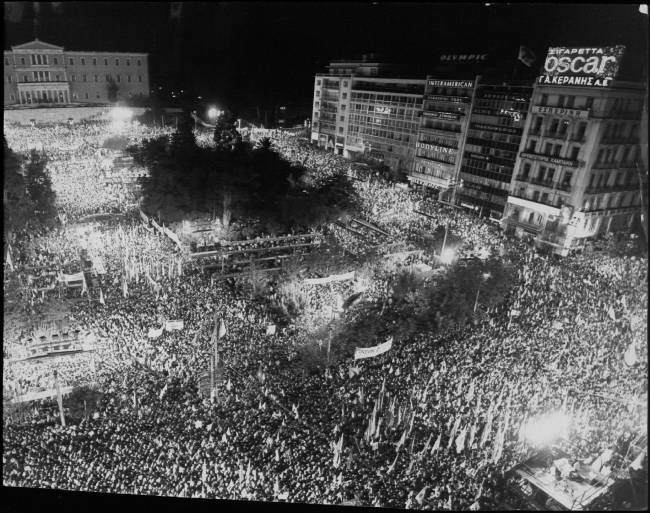 There was hope, there was ferment, there was anticipation. “The People in Power!” “For the First Time, The Left [in government]!” And when the Socialists were voted in, honest to God, random people were lighting each others’ candles in the streets. Just like Easter. The People had been reborn.

And then there was clientelism and corruption and disillusionment, but I was not around for that. I came back eight years later, shocked to see Andreas a laughing stock, and much of the country bought up by a con-man.

A chubby blunt-spoken first time MP was around for it though, and was surprised when he discovered that his voters expected the same favours and preferential treatment as did the supporters of the party they’d just ousted. Greeks have never forgiven that MP, for proclaiming his conclusion three decades later, “We embezzled that money together”—that the People were complicit in corruption. (So much more blunt in Greek, μαζί τα φάγαμε.) The People are not guileless, and The People are not always right. That’s always a useful corrective to realise.

I’m grateful I wasn’t around for the election of Syriza, “For the First Time, The True Left!” I’m grateful that my formative political experiences were not the sullen betrayal and dysfunction that Dimitris Almyrantis witnessed, a generation later. I’m grateful I got to taste some of the romance that comes before the Fall.

In Australia, first generation Greek migrants were just as tribal about being Labor. The conservative parties were aggressively Anglo; Greeks in the Liberal party are a second and third generation thing. Those first generation Greek migrants were after all, for the most part, labourers. Menzies founded the Liberal party to appeal to the “forgotten” middle class of shopkeepers, but he never tried to grab the vote of the working man. (That was much later, under Howard.) So there was no question of the household aligning with Labor, and yelling “You ape” whenever Howard was on the TV. I don’t think they quite realised that the Labor vision was being traduced from under them until it was too late.

In Australia, Labor had the largesse and vision of Whitlam, who my parents venerated. An appalling manager of his caucus and of finances, I’ve learned latterly; but this was back when people expected politicians to do more than manage finances. It had Hawke, who charmed the people into reform, and it had Keating, the last left visionary the country has seen—though he was the pioneer of fiscal managerialism, he still dared to have big ideas, backed with an acid tongue.

And since then, we’ve had a queue of puny shopkeepers, reactionaries and reactive centrists, poll-spooked functionaries. And myself voting Australian Democrats while they still existed as a third party, then Australian Greens until the Greens were big enough for people to start talking about “tripartisan” consensus, and then the Australian Sex Party for the lulz. (Well, for the left-wing libertarianism. And the lulz.)

So I was formed with a tribal allegiance to the Left, and with a vague notion of ferment and the People.

I’ve realised, gradually and annoyedly, that I’m not Left in the way I’d assumed I am. To the extent any of this crystallised, it was in my 30s and 40s rather than my 20s.

The axioms I’ve come to arrive at are:

Of these, (1) is Big Government left; it’s the overt continuation of where I started from, though much more socially aware than its tribal origin. (2) is a social conservatism I’m somewhat surprised by, but it’s there, bolstered by my thinking on nationalism and on my upbringing. It’s the covert continuation of where I started from, which I had not acknowledged because it did not fit the tribal narrative.

(3) is a libertarianism I’m also somewhat surprised by. A Libertarianism by Australian standards, at least, and a reaction to the curtailment of personal liberties that has emerged as a national consensus in Australia in the last couple of decades. (The stuff libertarians decry as the Nanny State.) I don’t think that reaction in me was led by reading so much; but it certainly has been informed by awareness of the American libertarian streak in political thinking (and not just its big-L Libertarian manifestation of wishing to drown the government in a bathtub).

Economically, I have come to appreciate that The Market can be a force for good, so long as it is appropriately shackled and regulated. I don’t look forward to the People’s appropriation of the Means of Production, because The People are not guileless; I don’t rule out a future where technocommunism makes sense (though I think climate catastrophe likelier), but in our current fallen circumstances, a regulated market seems to me the best compromise.

In the cartoons gathered up in Gallery of Awesomery, I have frequently had recourse to symbols, as shorthands of the Quora users I’m depicting. Many of them are taken from their profile pics, but not all. Here’s the symbols that haven’t.

This question previously had question details. You can find them in the question comments.

What kind of people follow him? Those who are drawn in by his sartorial splendour, his wry anecdotes, and his way of looking at the world askance.

What kind of people keep following him? Those who find his brand of elegant nihilism bracing rather than off putting. Those who take it to heart when he excoriates us for staying stuck in The Matrix.

As well as those who never cull their list of followers.

Answered May 10, 2017
[Question since deleted. Originally posted on http://quora.com/What-kind-of-people-follow-Michaelis-Maus/answer/Nick-Nicholas-5]

I’d forgotten about this:

Nick Nicholas’ answer to Why did the Ancient Greeks refer to Ancient Blacks (the Ethiopians) as ‘blameless’ and ‘favored by the gods’? Also, what does it mean?

(Oh, God, not Afrocentric history, anything but that.)

“The Aethiopians (Ethiopians) are high favored with the gods, they were the first of all men created by the gods and were the founders of the Egyptian Civilization.”

I’m trying to understand your answer. A few thoughts:

You can read the exchange in situ; we were clearly talking past each other. You can accuse me of hastily accusing the OP of Afrocentrism (though I don’t think that was an unreasonable assumption) or of dismissing Afrocentrism (I was certainly dismissing the stuff I’d found written about the quote on Google). Bigotry seems a little far-fetched to me, especially as my answer was saying Greeks were being benign-racist towards Africans (“noble savage”). But… I think that’s as direct an accusation as I’ve had.

Achilleas Vortselas did speculate about the psychology of Quora critics in a comment (?) to me once, and spoke of “fellow-travellers”. But fellow-travellers is a hallowed company to keep, and I certainly thought the speculation was fair game!

In my experience in Australia, we slotted readily into the stereotype of Arts students in general. (Well, I didn’t: I was a refugee from Engineering.) Leftie do-gooders, dressed down, partial to cheap wine, mostly laid back.

As OP clarified elsewhere, the prevalent account for the name Hades is that it originally had a digamma in it, and meant Unseen: Hades – Wikipedia. Ἀϝίδης A-wídēs > Ἀΐδης Ā-ï´dēs > ᾌδης Ā´idēs. The archaic wid– stem for ‘see’ is the same as the stem vid– in Latin, and wit in English. (The terms for know and see were interchangable in Indo-European; in fact the Ancient Greek for ‘know’ is the perfect tense of the verb for ‘see’.)

It is also true that the Digamma ϝ, which represented the letter /w/ in Archaic Greek, eventually came to look like a ϛ in the Middle Ages, when it was only used to represent the number 6.

That’s all there is to OP’s claim. The rest… no:

So not only is it implausible that Bean-Man is somehow an allusion to the missing sickle-letter in Hades’ name; the time frames for Bean-Man, the sickle letter, and the pronunciation of /w/ in Hades are off by centuries.

Pahawh is written left to right. Each syllable is written with two letters, an onset (la, an initial consonant or consonant cluster) and a rime (yu, a vowel, diphthong, or vowel plus final consonant). However, the order of these elements is rime-initial, the opposite of their spoken order. (That is, each syllable would seem to be written right to left, if it were transcribed literally into the Roman alphabet.) This is an indication that Shong conceived of the rimes as primary; Pahawh Hmong might therefore be thought of as a vowel-centered abugida. Tones and many onsets are distinguished by diacritics.

I’ve been here close to 2 years, and others have been 7. So using a year count would be self defeating.

Such a year count would only be relevant to topics about Quora. I’m quite happy with my somewhat adversarial, somewhat self parodying Quora credential as a Welchite. At any rate, I don’t think there is much to be learned about how Quora works, that you haven’t worked out within the first six months of being an engaged poster. (Well, that plus doing some research on the site.)

Being here for 2 years does mean I’m not an expert in being an “Old Planter” TW. And that’s ok by me.

Yes. BNBR is not an obvious notion to people who have commented to any significant extent on the Internet, and the requirement for BNBR is something users stumble on, not something they’re particularly alerted to. Quora’s particular notion of BNBR is far less intuitive than many are assuming it is: the tone policing, the expectation of deference towards public figures, the intolerance of several forms of humour.

Answerers are getting sidetracked into mechanisms of how the onboarding should be done, or how difficult it would be to ensure that people pay attention to onboarding. I would still retort that some onboarding is better than no onboarding, and no onboarding has been Quora’s MO for years now.