The cumulative effect of the following: 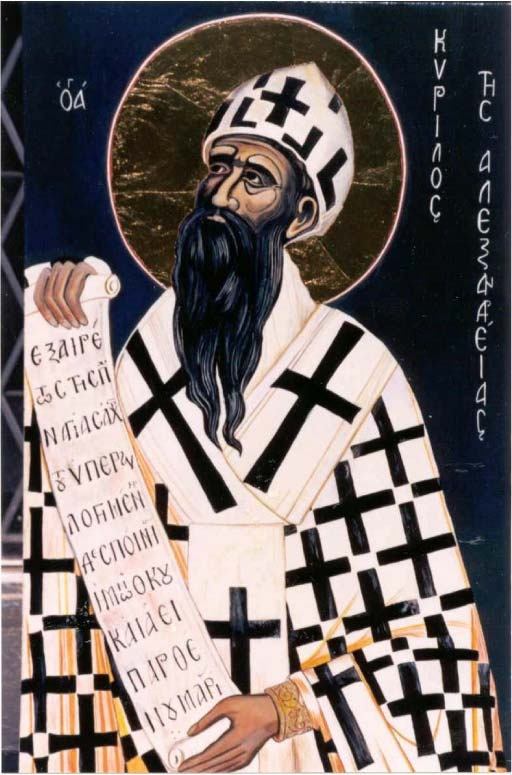 Patriarch of Alexandria. Doctor of the Church. Founder of Mariology, and formulator of the concept of the Mother of God. Establisher of Miaphysitism, the distinct belief of the Oriental Orthodox Church; yet his formulation was also foundational to the Chalcedonian Christianity of the Catholic and Eastern Orthodox Church.

Even if you don’t hold him directly responsible for the lynching of Hypatia, St Cyril was a street thug in a long line of street thug Patriarchs of Alexandria, with monks as his shock troops—and heretics, Jews, pagans, and any Christian who crossed him as his target. Most of his contemporaries recoiled from him; the church historian of the time, Socrates of Constantinople, does not have much nice to say of him.

A couple of decades ago, his collected works were accidentally deleted at the Thesaurus Linguae Graecae, on the old Ibycus system before my time; the grad student ran in exclaiming “I’ve deleted Cyril! I’ve deleted Cyril!”

That’s not much of a revenge against Hypatia (especially once the backups were restored). But it’ll have to do.

What is your first memory?

I remember remembering being photographed, and thinking how tight my pants were. The photo is with my sister, and I must have been 3 or 4. It’s at my parents’; I should get it some time and scan it in.

Yes, I was chubby.

Yeah, when I was an undergrad, someone did a conceptual art thingy, involving nailing books into the lawn. And students had the kind of anguish that McKayla Kennedy spoke of in her Pinterest answer. And rescued the books; I got a Ulysses out of it.

The books were going to be pulped by the publishers anyway, as surplus; they were released for the conceptual art thingy on the understanding noone would rescue them.

Was that the biggest atrocity?

McKayla rightly identifies that a conceptual art thingy is worse than burning a book. Burning a book recognises its power. An art piece?

They don’t care what they’re doing to the poor things, all that matters is how it looks.

There’s worse than that though, McKayla. Even that, at least, is a symbolic acknowledgement of the book; it fetishises it as a symbol.

Whenever I step back in the university library. And I see students, one after the other, on their laptops and on the remaining desktops. Checking Facebook, or eating lunch, or Googling, or studying PDFs.

And not one of the bastards paying any attention to what’s sitting on the shelves.

There’s being utterly oblivious to them. Within the temple once consecrated to them.

I’ll of course overlap with others, but that’s to be expected, and it’s a Survey Question anyway.

Let me break this down into what motivates me and what triggers me.

I find the respondents’ reactions to date odd; but then again, I wasn’t attracted to Quora because it was a walled garden. I’m grateful that the stuff I write on Quora gets higher ranking in Google than what I’ve written outside Quora, and I’m annoyed that outsiders have to jump through hoops to get to it.

I’m more of an old school internet person, and I agree with those who think walled gardens compromise the integrity and the usefulness of the web. Hyperlinks are the point of it. Hyperlinks in, and hyperlinks out, and the free flow of information in between.

And the biggest annoyance about Quora being a walled garden? I’m not convinced it’ll be around in five years. And archive.org has no reach into it. Everything we do and are is a sand mandala; but walled gardens are that much more perishable. And that much less impactful.

I’ve just had one answer get trapped by the SpamBot because I got link-happy in the answer. It was clearly a bot action, and I know why it thought they were spam, though that wasn’t the intention. I removed the links, appealed, and got the answer restored.

There’s a lot about Quora Moderation that I vehemently dislike; but I agree with Jennifer that the deletion of answers is sparing, justifiable (reasons are given, so it’s closer to transparency than the norm), and appealable.

I’m answering the question as stated, though Joe Buettner pointed out OP was actually talking about collapsed answers.

My country (Australia) already has a slogan. The Lucky Country.

The popular understanding, within and outside Australia, is that Australia being lucky (having lots of resources, affluent, stable) is a good thing. The original book, which everyone in this country should read (and which is still relevant 50 years on), argued that this was a very bad thing: it allows complacency. The full slogan, which not enough people realise, is:

Australia is a lucky country run mainly by second rate people who share its luck.

Nick Nicholas’ answer to What is the scariest thing about living in Australia?

My country (Greece) already has a slogan.

Pegah, canım, you’re Torki not Farsi, but you know very well what it is to live in country arrogant about its long past. And you know that it’s not a healthy thing.

Who knew! I googled this, and found that a real guy had said this. Nikos Athanasopoulos, a member of parliament, who died this year. Spoken to Emile Mennens, a Belgian anti-corruption official of the European Union (then EEC), in 1990, who was testifying against Athanasopoulos in court, and criticising Greek public administration.

The context does not surprise anyone, does it…

The question is about Grammatical aspect in Koine Greek, as OP clarified. That’s OK, the behaviour of aspect in Greek has not essentially changed since antiquity. In fact, not that I’ve checked, but I’m struggling to think where it’s changed at all.