Originally asked: Who were the biggest enemies of Greek?

I’m going to assume that you meant “enemies of the Greeks” or “of Greece.” Personally, I don’t know anyone opposed to the language!

The biggest enemies of Greek are, of course, those endless generations of British public school students before you, Austin, who had no real choice as to whether or not they were subjected to the rigours of the Ancient Greek verb system. The ones who were boxed around the ears by their masters, to the sound of “THERE IS NO FUTURE SUBJUNCTIVE!”

Joke’s on them, btw.

As for the possibly intended question “Who were the biggest enemies of the Greeks”:

The Primordial Enemy for the past 200-odd years have of course been the Turks.

Recentism has effaced the fact that 500 years ago, there was probably more resentment about the Venetians than the Turks among the peasantry in the Greek islands. The Ottomans may have imposed a capital tax and recruited Janissaries, which provoked plenty of hatred; but they did not institute corvée, and they left the Orthodox senior clergy alone.

Recentism also is foregrounding the Germans, but that’s pretty superficial. (He says, from a safe Antipodean distance.) There is an undercurrent of grudging admiration for Germans too. The 2 AM to 4 AM guard watch in the army is colloquially known as “The German Watch”—since you’d have to be a German Übermensch to deal with doing guard duty at that ungodly hour.

I am on a lifelong mission to annoy Victoria Weaver by saying:

But if I’m to be completely honest, it’s Bach.

Mahler, because of the cathartic emotional extremes, the amazing orchestrations, the largescale forms, the cogent narratives.

Bach above Mahler, because of the sublime joining of intellect and passion, and (I hate to admit) because it can communicate to you even if you aren’t paying rapt attention (which is why I default to it at work).

Mehrdad, unlike the other respondents, I will disappoint you with a meta-answer. But it is the truer answer.

There’s no such thing as an older language.

Let me transpose the question to Iberia. People often say, “Woah, man, Basque is like, the oldest language in Europe, man! It’s like, as old as the Cro-Magnon!”

That’s crap. Basque is as old as Spanish is.

Yes. And 2500 years ago, they didn’t speak Basque either. They spoke Aquitanian language. Which was the ancestor of Basque.

Yes, but you didn’t say “what is the longest continuously spoken language family in Iberia, without involving major territorial changes.” You said “oldest language”. And Basque is no older than Spanish in that regard. There was an ancestor of Spanish spoken 5000 years ago (somewhere far to the east), and there was an ancestor of Basque spoken 5000 years ago (maybe closer to Spain, maybe not).

So. Same for Farsi and Arabic.

So, OK, Old Persian is older than Old Arabic. But Arabic did not drop out of the skies into Nabataean. At around 600 BC, people were speaking an ancestor of Arabic. Something *like* Dadanitic (though probably not Dadanitic itself).

So you tell me:

Is one older than the other? Why? Because it has the word “Persian” in it? Because it might (*might*, I actually don’t know) have changed slower? But that doesn’t make it older. Old Persian is still not the same as Farsi, any more than Dadanitic is completely different from Modern Arabic.

Do we have more old written literary texts in the Persian branch than in the Central Semitic branch? Sure. But that’s not what “older” means. That’s what “older literary use” would mean. 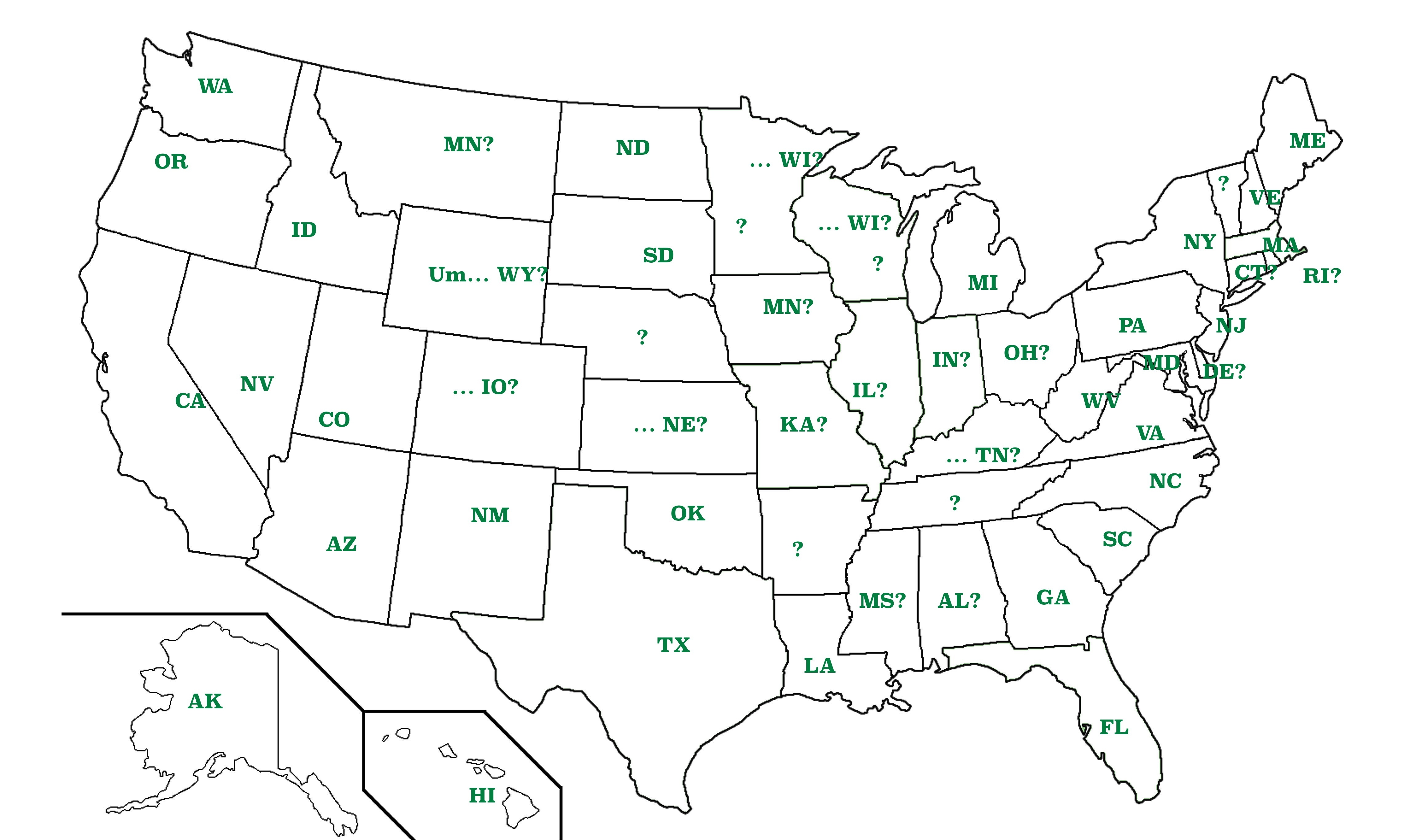 (And I’m doing a lot better than the average Australian.)

So, who do I got to apologise to?

Honestly? Better than I expected.

I connect with Quora at the café on the way to work: The Ambrosiary 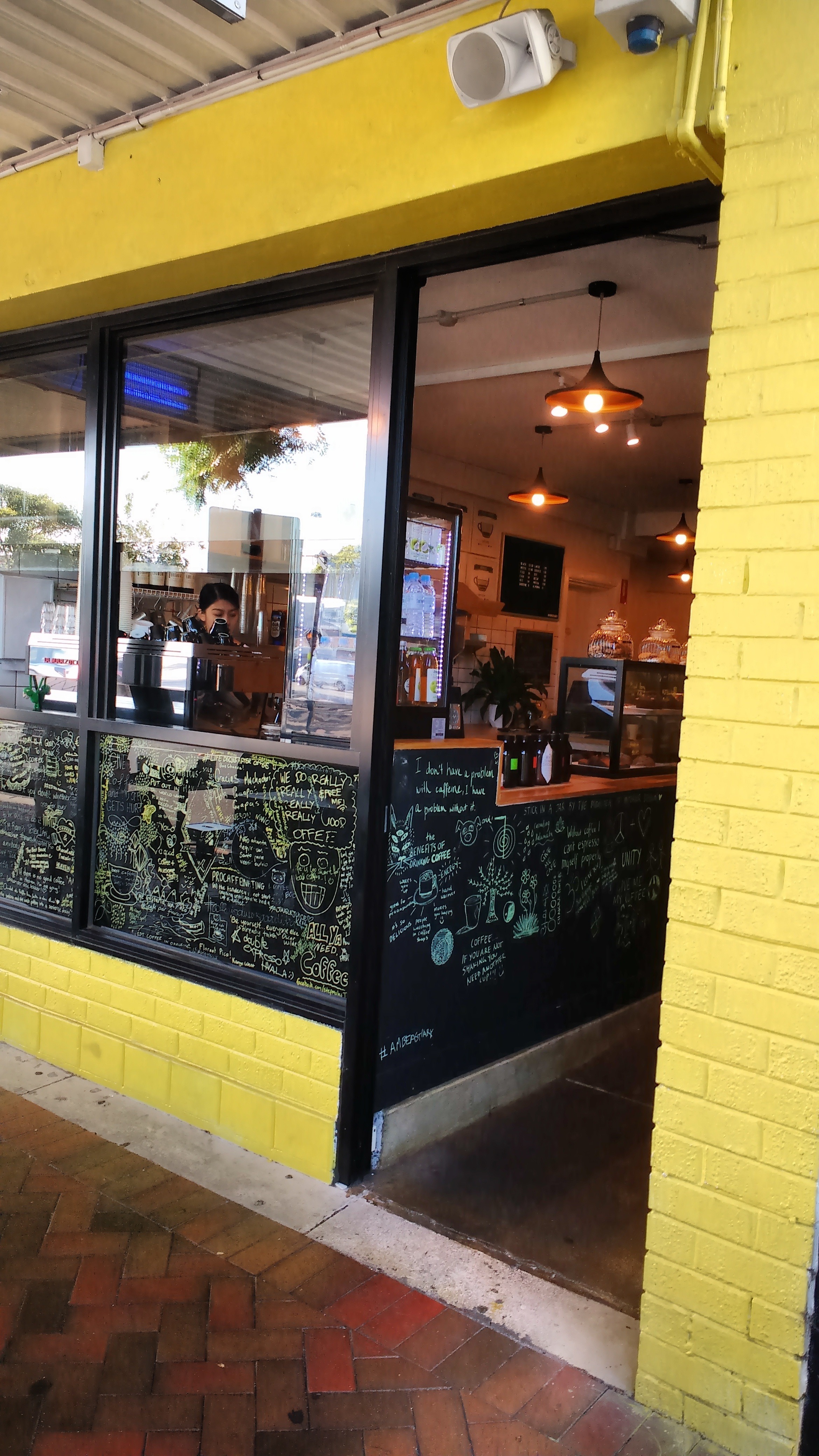 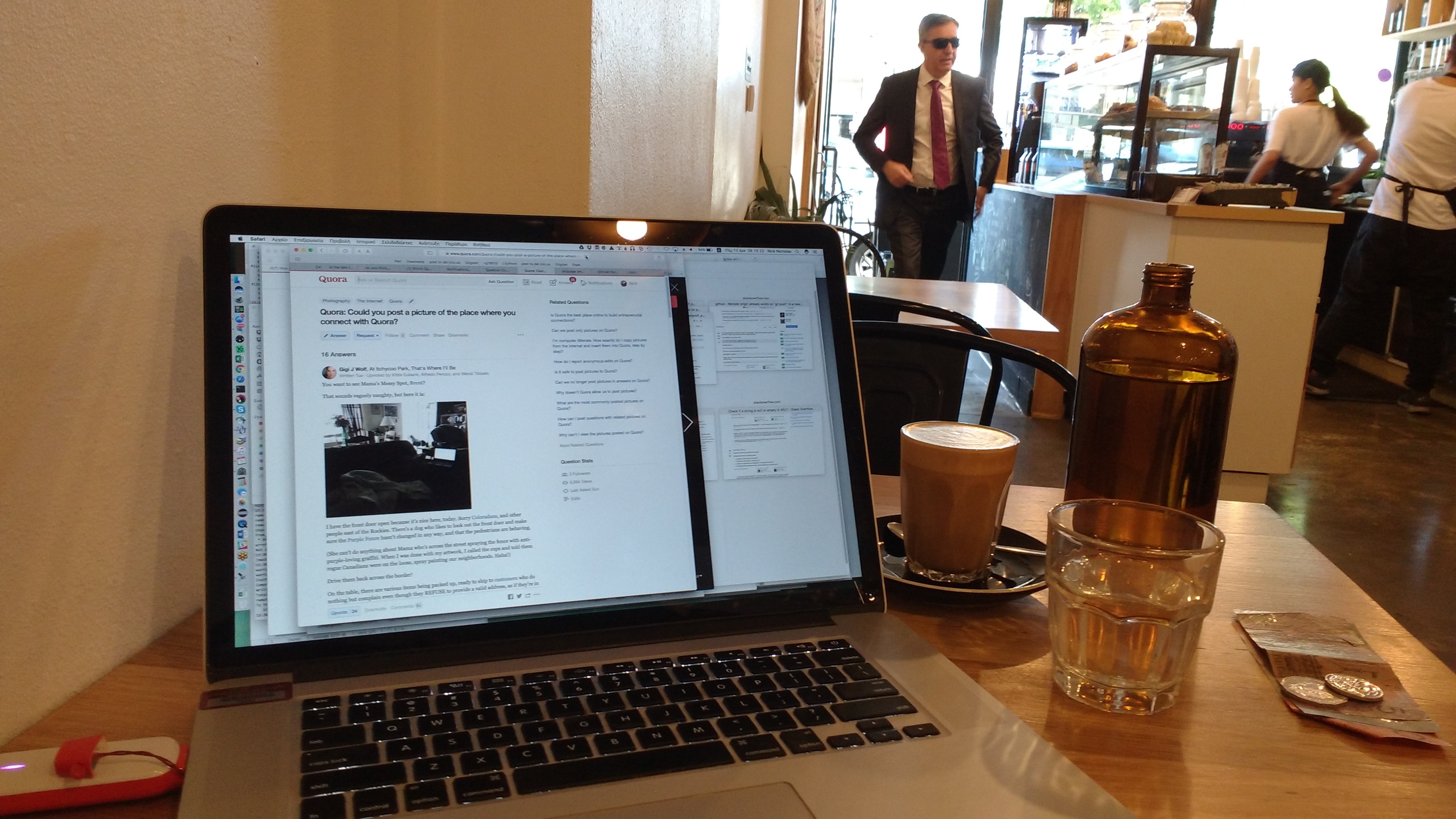 I connect with Quora on train to (and from) work: 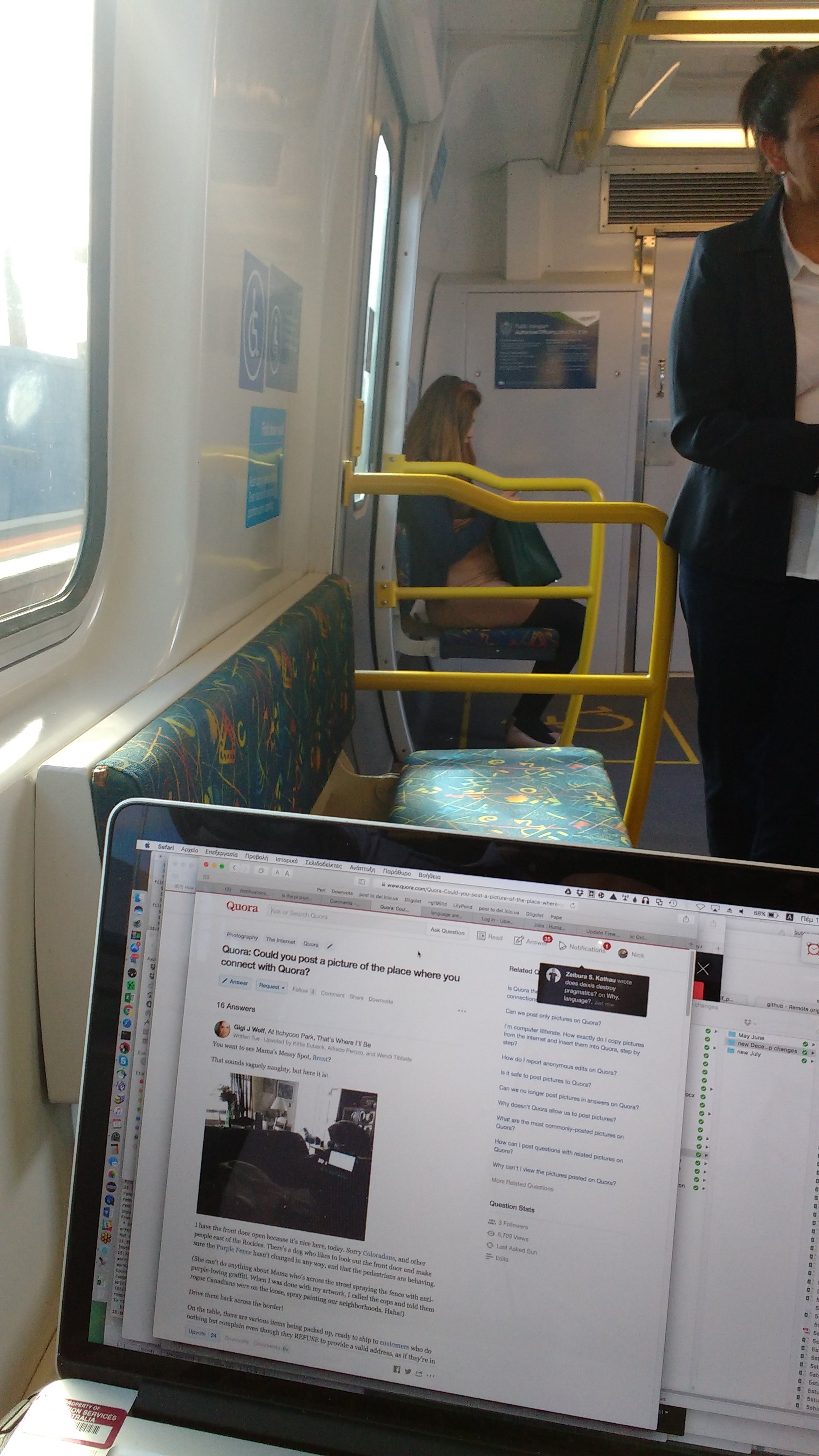 And I connect with Quora at the café at work: Mughouse | Facebook 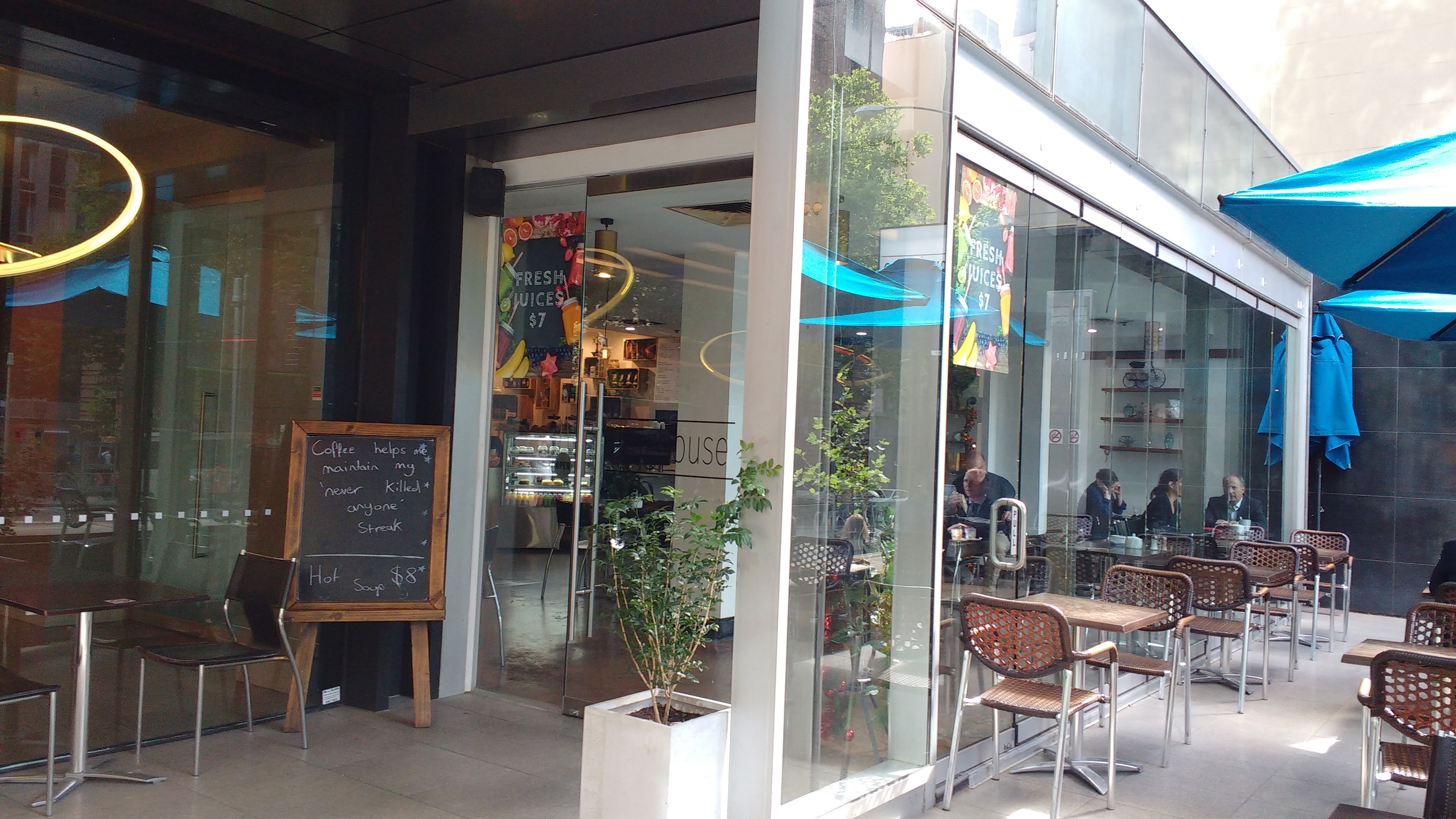 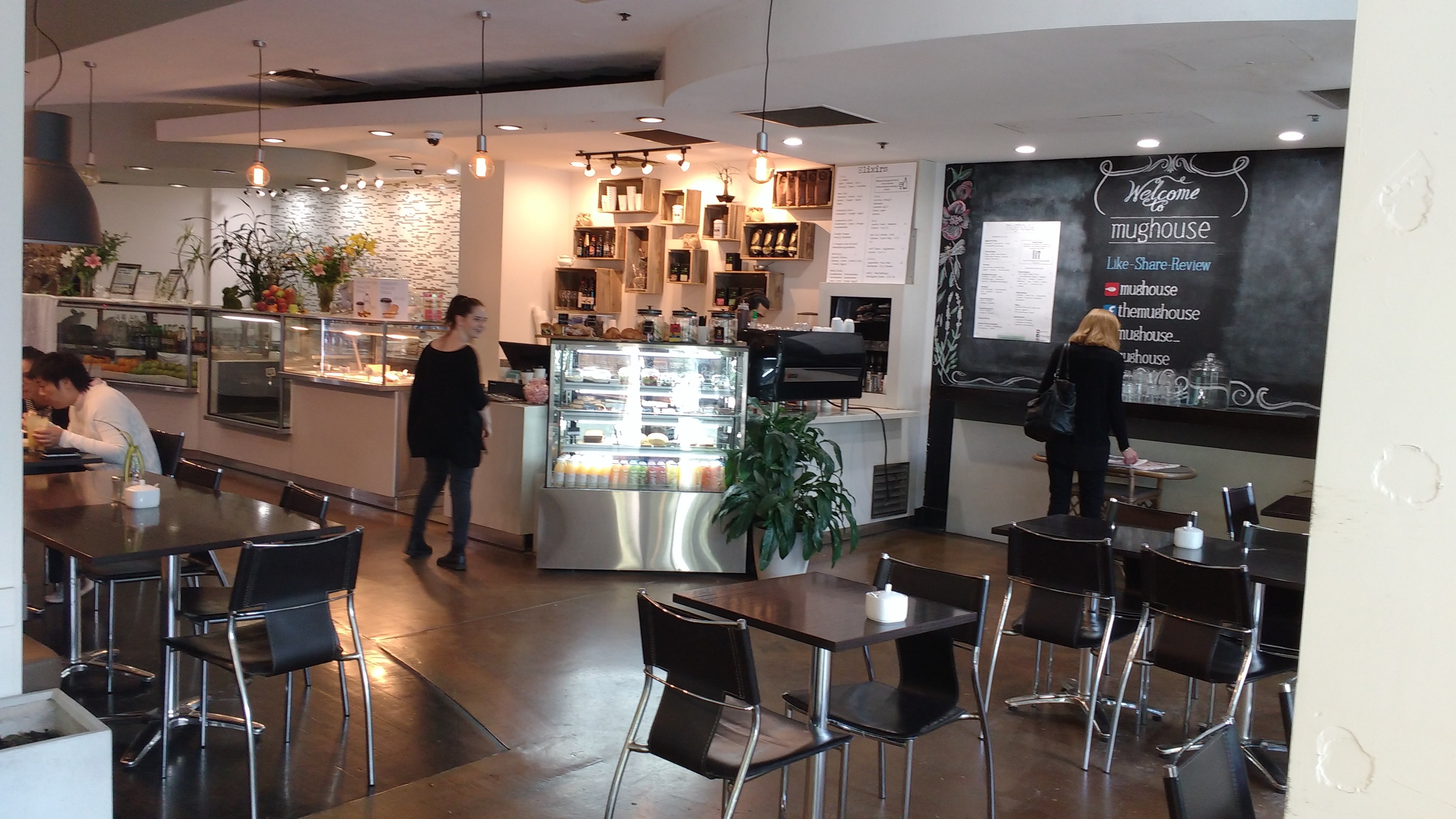 … when I’m not dad-dancing to the tracks playing as I walk in, or doing stupid banter about today’s blackboard message with the staff. (Today: “Coffee helps me maintain my ‘Never Killed Anyone’ streak.”)

There is ongoing debate as to whether Quora is a social networking site or not:

The debate is getting confused as to whether it has the tone of popular social networking sites or not. Because obviously (to me), a site where you have followers and comments and can interact with people with whom you have common interests is a social networking site. And Quora has had that functionality from the very beginning—though it tried to conceal it under the weird Credits (discontinued Quora feature) economy, and Adam D’Angelo is rumoured to have wanted to do away with comments.

The real question implicit there is whether Quora is being less than it should be, because of the increased emphasis by users on using Quora socially.