This was originally a comment to Sophie Dockx: Quora Moderation is Under Attack : https://insurgency.quora.com/Sop… . Republishing here with permission from Dan Rosenthal. (See also my comment in the original place published.)

I’d take any claims of unjust banning from controversial users such as Sophie with an enormous grain of salt. Look, I’ve worked in online community management for a long time, including administrating/moderating on social media outlets WAY bigger than Quora; I’ve also represented clients in consumer protection claims when they come to me wanting to sue a website for “wrongfully banning” them. 99% of the time when someone says they were banned unfairly, they are wrong. Sometimes it’s intentional attempts to deceive; other times it’s just human nature of an inability to admit one’s mistakes. But it’s very, very rare to actually see someone having been permanently banned by mistake. And even in the cases I’ve seen on Quora where a ban was unquestionably by mistake, they’ve been reversed within a day or two.

Now, this is not to say things are lovely in Quora Moderation land. Quora Moderation is all kinds of broken and insufficient; but I have to laugh at the concept that it’s because they’re banning *too many* people.

Fake names are a problem, but on their own — absent any other bad behavior — the only impact they have is making it more difficult to assess a user’s credibility.

The real problem is that fake names are highly correlated w/ malicious users intent solely (or largely) on bad behavior. And Quora’s small moderation team is not doing a good enough job of identifying potential trouble users and flagging them in such a way that they can be quickly moderated. Instead, almost all users — good and bad — appear to be treated as part of the same pool, causing moderator overload.

Put it this way — when triaging an accident scene, do you think the doctor should start w/ the people showing no outward signs of injury, or the people bleeding profusely?

There are plenty of ways this can be done. Machine Learning is something Quora keeps harping on about, to the point of writing public articles about it. Yet Quora’s ML for moderation is, frankly, trash. A proper, robust system, would be self-correcting from analyzing the patterns of manually-banned users and increasingly flagging similar accounts as potential threat vectors. A proper, robust system, would keep this pool segregated from the general population of Quora users, so they can be monitored and their interactions can be vetted. We see the first halting steps at this with the anonymity review period, for instance; but it could be so much more.

Meanwhile, there is no parallel process to handle direct reporting of actual confirmed problem users post-incident, from trusted users, because frankly even those of us with access to moderation resources aren’t getting responses from said resources. I’ve personally made Quora moderation staff aware of a well known user, with evidence of that person openly admitting to using multiple sockpuppet accounts to harass me, combined with contextual evidence analyzed from their writing. Despite personally directing a moderator’s attention to that, not only has no action been taking, it didn’t even merit a response.

The analyses given by Stephen McInerney and Miguel Paraz are… not implausible. But let me take self-interest as a Quora critic out of the equation, and give a facts and figures answer, using the exemplary Laura Hale’s answer to Who is the most followed/viewed/prolific Quoran that has never been awarded Top Writer? as source data. (She is dearly missed.) Answer written in June 2016, and I suspect the source data is rather more dated than that.

Let me also ignore all the celebrities in her answer who didn’t make TW, because when you *do* award Top Writer to celebrities, you get Tim Kaine and Hillary Clinton, and that was widely lambasted as seven different shades of dumb.

(It gave me a lot of satisfaction to redact out all those Silicon Valley celebs with 20 answers and 50k followers that I’d never heard of.)

Of Laura’s list of 114 writers with 10k followers who were not top writers, 19 were not Verified User ticked: that means 95 of the 114 were celebrities. I think we can agree that we don’t need another 95 top writers with the level of contribution that Hillary Clinton and Tim Kaine have made to the site.

A few more of them look to me to be celebrities, so I am taking those who don’t have at least 100 answers out of consideration:

Of the remaining users, again excluding celebrities: asterisk is for those viewed more than 10M times as of Laura’s answer. Vo Nghi Nguyen (not in the list below) is the only non-top writer who had written more than 2500 questions (he has half of that now, and he has made Top Question Writer once the award was devised). 1000 answers at the time of Laura’s answer: daggered. Writing in more than 5 topics: hash.

(Users who have refused the Top Writer award: §)

So. This list features people who are prolific and popular.

What do you notice in this list of 13 overlooked Quorans?

Two of the 13 are NOT Indian: Becky Lee (a celebrity blogger, from what I can tell), and Rory Young.

The Indian Quora is a more youthful, chatty place than the American Quora, we know; could it be that the 11 Indian Quorans are known to write “fluffy” content, which Quora does not prioritise? Let me cull those users who have Life and Living, Life Advice, and Dating and Relationships among their top 5 topics:

Ouch. I wish that didn’t cut out 8 of the 11 Indians. There are plenty of TWs who post in those areas, but we do know Quora looks at that component of the site askance.

Let me do better. Omit writers whose top 5 topics are restricted to: Life and Living, Life Advice, Dating and Relationships, India, Quora, Philosophy of Everyday Life, Psychology of Everyday Life, Social Advice, Human Behaviour, Friendship, Career Advice, Survey Question, Self-Improvement, Jobs and Careers (and I’m including Becky Lee, who has no topics at all):

4 of the 11 Indians still cut out, and I’m looking with some concern at whether Politics of India should keep Bhuvi Jain in.

I don’t know much about these posters, so I’ll have to be enlightened as to what other commonalities I am missing. The omission of Rory Young is somewhat surprising, and Ankur Warikoo actually hosted a question session last year. Snehansu seems to be the kind of enterpreneur you’d think Quora would jump at.

Bear in mind that the numbers are at least 9 months old, and Laura’s list was not exhaustive; I’m pretty sure there are writers with 10k followers 9 months ago who’ve never made TW that she’s missed. There’s plenty more now; Habib Fanny and Jordan Yates for example, who don’t match the patterns shown in the list above. Still, this list tells me something.

Common characteristics of very popular writers? Being a Quora critic is not, I believe, among them: that’s a characteristic of some moderately popular writers. I’m not seeing any Scott Welch’s or Stephen McInerney’s or Nick Nicholas’s in the list. “Single (Indian) Girl on the Internet”, which Stephen points out, is a real thing, but I don’t think it explains most of the omissions in this list either.

Common characteristics of very popular writers who have not made TW:

EDIT: The omission of Rory is a puzzler, given the list, and Rory has offered an explanation: he asked to be removed from the list of Top Writers. Ditto Bhuvi. They are now marked with a section sign §.

This was reported gone yesterday (McKayla Kennedy’s answer to As of April 2017, what should I do to view the list of “most viewed” writers in a topic?), but not for everyone. It’s gone for me today. Given how the feature had been crippled already, I have little incentive to think this is a bug as opposed to a feature (see Bug? or Feature?) Who knows: it might come back. The “Follows You” badge did. It might not.

Most Viewed Writers (Quora feature). Like all good, bad, and indifferent ideas on Quora design, it did not last.

Designing an Offsite for Designers by Giselle Rahn on Quora Design 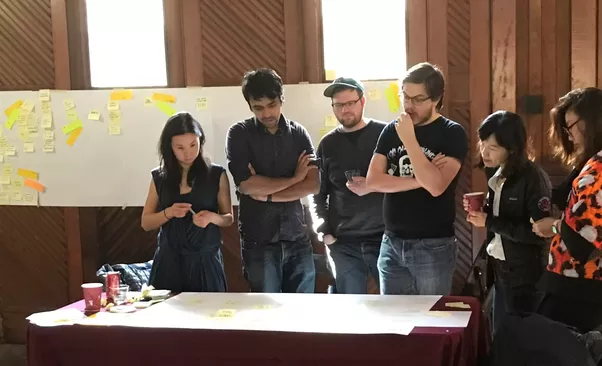 Nick Nicholas’ answer to What do you think of the changes to the Most Viewed Writer system on Quora? (Feb 15 2017)

So… how will “writers who are most actively contributing and helping people within the topics they know and care about” be recognised now? [citing Most Viewed Writers by Jackson Mohsenin on The Quora Blog, 2015–08–14]

Well I guess the badges are still there. For now.

Yes. I called it.

What did I think, when I found out that anonymous answerers will not be able to comment or be notified on comments—followed immediately by this?

“I’m trying to become a saint. But they won’t let me!”

EDIT: And today… they’re back.

For those confused by that: A Constance Ocass of Cerigo (= Cythera) got married in Melbourne in 1879. Tahlia O’Cass (the OP) is his descendant, and posted in that thread. The surname is clearly mangled from something Hellenic, and another descendent, Rita Kocass, posted that her family’s information was that the surname was Kokakarsas, and that he was from Skorpios near Ithaca.

1879 is extremely early, and both Ithaca and Cythera are completely plausible for migration from Greece that early (the only other place Constance might have come from was Kastellorizo).

Yiannis Papadopoulos is right that Kokakarsas does not sound Greek, and Google reports no such surname; given the penetration of the Web by now, including historical archives, I’m reasonably confident there wasn’t ever such a surname, and that something got mangled in the Kocass family tradition.

Given User-13249930999434776143’s answer that Kokakarsas is a bunch of Albanian vulgarities, it’s not impossible that an Albanian trolled the Kocass family about their surname, but I think it’s demographically unlikely. Neither Cythera nor Ithaca are Arvanitika territory, so I don’t think indigenous swearwords are the pathway for the surname either.

There’s a book on Cythera surnames (Καλλίγερος, Εμμανουήλ Π.: Κυθηραϊκά Επώνυμα. Εταιρεία Κυθηραϊκών Μελετών. First edition: 2002, Second edition: 2006), and Untitled Document lists the 258 surnames discussed in that book. None of them look like –(k)okas–. Kalie Zervos in that genealogy thread guessed that it might be “Cassimaty or Castrissios” , and Κασιμάτης and Καστρίσιος from the book’s list are indeed the only matches to Kas-. Karatzas isn’t much closer. Maybe Γεωργάς Georgás? But surely that would have just ended up as George.

The Melbourne Greek Orthodox Community has put up images of its minutes from 1897 to 1916: Greek Orthodox Community of Melbourne and Victoria. (Btw, that is *not* how you publish archival images. A simple PDF would have been a lot better.) Nothing jumped out as matching O’Cass there either, and Constance Ocass died in 1896. At any rate, he became Anglican, so his progeny wouldn’t have shown up in the Orthodox church’s logs—though as the genealogy thread says, one of his sons may have married in the Orthodox Church in Sydney.

I don’t think I’ve helped you, Tahlia. If you have more patience than me, you can pore over the 1897–1916 ledger, but I suspect your ancestors won’t show up there. If you *do* get somewhere, please let us know!