Some of us complain about how Quora now does not let you customise anything, ever, at all, about your user experience. This is clearly an ideological thing for Quora Design.

Well, lookie here at what user config used to look like on Quora in 2010:

What can we learn from Quora? 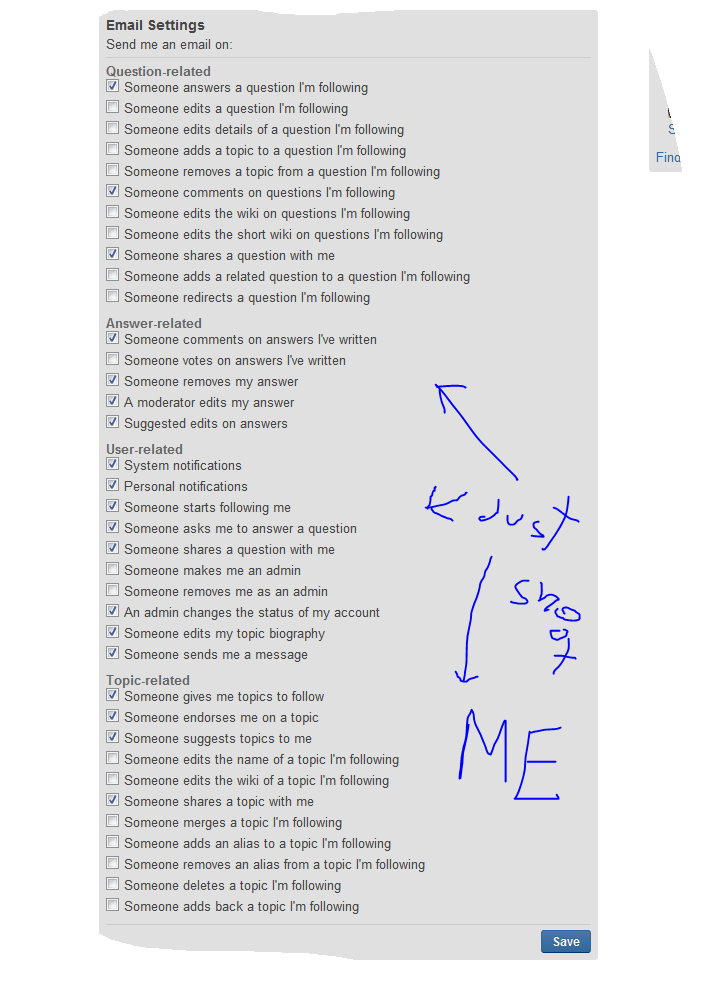 That pendulum has swung the other way, hard; and it sure looks like it’s had a long way to swing…

A quote in this StackExchange thread applies to both 2010 Quora and current Quora:

For starters, in the West, Greek affixes were used in scholarship, where it was felt they were more nuanced than what Latin had to offer. Suffixes to express ethnicity were felt to be a less rarefied domain, and English and Latin between them had it covered.

For seconds, Greek differentiated between suffixes denoting ethnicity, and adjectival suffixes. –ikos was only the latter. So a vase might be Athēnaïkos, but Thucydides could only ever be Athēnaios. Just as he was a Hellene, and not a Hellenic.

That’s why when the –ic suffix is used against countries, as OP noted, it is used as a scholarly specialist term, rather than as an ethnic term, and it is used as a convenient way to differentiate a major language from its superfamily. Germanic vs German, Turkic vs Turkish.

This is terribly inconvenient for Greek, in which Germanikos and Tourkikos are merely the adjectives for German, Turkish. The former is accordingly rendered as Teutonikos instead, but such synonyms are not usually available. The only real solution for the latter is to call them Tourkogeneis Glosses, Turkogenous languages — that is, languages that originated from (small-t) Turks.

I started reading this book early in the evening: 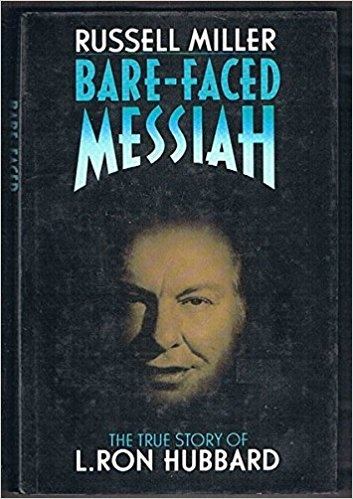 I did not put it down until 10 am the following morning. I did not sleep; I just kept reading and reading. The narrative it presented, of L Ron sinking into his own mythos on board a Sea Org cruise ship meandering through the Mediterranean, was devastatingly enthralling.

I’m bypassing the obvious answer, Frangosyriani, because that’s a song that in a sense ended the Classic Rebetika period, and marked the start of the taming of the tradition that brought about laika music.

Songs that I have a lot of time for myself include:

Been condemned for five years
to Yedi Kule jail.
Had the blues so bad,
I started smoking the bong.

Blow, suck, drag it in.
Step on it and light it up.
Keep a look out for the hillbillies,
them jailers.

Five more years forgotten
by you, my dear.
The guys would light me up
the bong, to cheer me up.

Now I’m out
of Yedi Kule jail.
Fill up that bong
so we can have a smoke,

Blow, suck, drag it in.
Step on it and light it up.
Keep a look out for the alley,
here come two schmolicemen.

Set it up, Stavros, set it up,
light a fire and burn it up.

Give a puff to Mad George,
craftsman and woodworker.

Have a drag, John the carter,
you sly den-dweller.

Give it to our dear Nick,
so he can satisfy his yearning.

Give a drag to our Batis,
the thug and lady-killer.

Why yes, the animation on the video *is* by one Nick Nicholas.

A raid on the hashish den

Branko Jovanovic’s answer cites Yahoo Answers and Reddit as the more informal alternatives; the more formal alternative is Stack Exchange. The Stack Exchange family of sites started with Stack Overflow, where it has the monopoly as a programming advice site (that Quora could never hope to displace), and is aggressively moving to other fields; its English Language site is well established in the googles too.

FWIW, Nikolay Starostin’s answer to Is Quora overtaking Stack Exchange? indicates that Quora has been ahead of Stack Exchange this past year, but not by an overwhelming margin; and Quora’s numbers are skewed by its high Indian population.

Outside of English, Zhihu may be a Chinese knockoff of Quora, but it guarantees that Quora won’t even bother to step into the Chinese space; Mainland Chinese are well known for not venturing outside the Great Firewall. TheQuestion may ending doing the same thing with Runet. OTOH, it does not seem that the French and German existing alternatives to Quora pose a serious challenge.

We don’t have good data on language in Turkey. We know that the religious assimilation of the existing population there seems to have taken something like three or four hundred years: Nick Nicholas’ answer to When and how did modern Turkish become the majority in Anatolia?—from the Battle of Manzikert in 1071, through to the 16th century. According to this view, the substantial Greek-speaking Christian population of Western Anatolia in 1900 resulted from internal migration within the Ottoman Empire, from the Aegean.

Greek and Christianity remained in Northern Turkey (Pontus) and Central Turkey (Cappadocia) up until 1922.

Greek-speaking Muslims arrived in Turkey in 1922 after the population exchanges; the best known such population was from Crete. There are reports that some of them still know Greek, but the majority of them have assimilated.

In Greece: under Ottoman rule, there was Turkish settlement in northern Greece (Macedonia and Thrace), and there were conversions of Greeks to Islam (Crete). The former spoke Balkan Turkish; the latter spoke Greek, though with substantial Ottoman Turkish vocabulary, particularly with regard to religion.

The Muslim population in Crete dropped from half in around 1800 to more like a third by the late 19th century, before community violence broke out and Muslim Cretans started fleeing Crete. This suggests that there was some conversion of Muslims back to Christianity (even though this was a capital offence), as the relative prosperity of the two communities shifted.

After 1922, the Christian refugees to Greece included a substantial number of Turkish-speakers. All indications are that Turkish did not survive more than a generation in Greece, although there are certainly anecdotal reports of it being used; PAOK, the refugee-based soccer team of Salonica, was known trilingually (Greek, Pontic Greek, Turkish) as O PAOK mas/Temeteron PAOK/Bizim PAOK “our PAOK”.

The Treaty of Lausanne provided that Turkish Muslim populations would remain in Western Thrace; the community has remained Turkish-speaking and Muslim, and is educated in Turkish. indeed there are indications that the Muslim Pomaks in the region, who speak Bulgarian, have shifted to Turkish because of the greater prestige of that language.

The Muslims of the Dodecanese were not subject to the population exchanges, as the Dodecanese was under Italian rule at the time. There is a small remaining Muslim population in Rhodes and Kos; I do not know if it is Turkish-speaking.

Few years ago I was two months in Rhodes for fixing my boat , heard from people there was a small turkish community with 1000 people.I ve met some of them as one guy was working for the drydock where my boat was.They speak turkish with a heavy greek accent which is ofcourse natural. By the way I am turkish .

The received wisdom in academia is yes, although several users here (Dimitris Almyrantis and Dimitra Triantafyllidou) have questioned how feasible this is. The argument made by Speros Vryonis Jr, and summarised in Nick Nicholas’ answer to When and how did modern Turkish become the majority in Anatolia?, is that any deurbanisation and mass migration happened in the first century after the Seljuk arrival, at the end of which Anatolia was still substantially Christian. The reduction of the Christian population accelerated in the 14th and 15th centuries, and was accompanied by extensive Islamic missionary activity. By the start of the 16th century, Western Anatolia (Anatolia Eyalet) was only 1.5% Christian.

Northern Anatolia (the Pontus) and Central Anatolia (Cappadocia) seem to have been exempt from this trend; Vryonis does not discuss these, but presumably the former is to be explained by the late conquest of the Empire of Trebizond, by which time the Millet system was established and gave Christians some degree of autonomy. The Christian population in Cappadocia was small, and substantially assimilated linguistically, and this may have been more an issue of inaccessibility.

Thrace is not covered in Vryonis’ work, and my impression is that a substantial Christian population remained in place.

I’m turning 46. Vague back pain, which I can mostly ignore. Occasional headaches and lightheadedness, apparently associated with adjusting to new medication, which I am finding it harder to ignore. And of course, the heartache of a middle-aged man’s disappointments.

The village name was Lapi, which was believed to refer to the Lab tribe of Albanians (normally rendered in Greek as Liapis, and I wouldn’t be surprised if this is a folk etymology).

As inevitably happened with most foreign-looking village names, the village was renamed to Rizochori in 1940. The link reports that its current population is 60.