I’m sure I’ve already answered this more fully elsewhere on Quora, but:

Cultivated Australian was pretty much the same as British Received Pronunciation, except that its plural -es was formed as -əz instead of -ɪz.

General Australian is in the middle.

Cultivated Australian is much, much less prominent now than 50 years ago, when every doctor and lawyer on TV sounded like they’d just flown in from London. It’s fair to say it has been stigmatised.

The prenasalised pronunciation is older, as the spelling shows.

There are dialects that prenasalise and ones that lose the preceding nasal. E.g. Cyprus for the former, Crete for the latter.

Within Standard Modern Greek, prenasalisation has been associated with Puristic Greek, and un-prenasalised stops are becoming more common in casual speech; there are also associations with register, age, and class. This has been going on for fifty years. The cutoff Arvaniti & Joseph found in the linked paper was being born in 1955.

I’ve actually been puzzled by this myself.

I mean, I know the answer, obviously. It’s a politeness plural, patterned after French Vous (and Early Modern English you). And it’s been mainstream in Greek since the 19th century, although Greeks in practice avoid out when they can—because to them it’s much more about distance than respect.

What’s puzzling to me is, it’s kind of early for Byron to be using that form, before any mass influence on Greek of Western European languages, via media or mass education. Certainly no peasant in 1820 talked like that. Maybe the intelligentsia were starting to ape the French that way, and that’s who Byron was talking to.

Worst memory? I guess lugging a suitcase through the Red Light district.

Jottings of Amsterdam, Centraal to Rusland

But you know, sex shops and aromatic coffeeshops, and prostitutes in lingerie incongruously tapping on the window as you walk past (Lady, I’m lugging a suitcase halfway across Centrum, and it needs A Good Time right now even less than I do)—do not convey the frisson of risk and edge that they might. I chose the word tacky rather than dodgy, and there was a reason for that. Sebastian (who I was visiting in Nijmegen) crystallised it for me when I expressed my disappointment to him: it’s a clean, sanitised, manicured experience of sex and drugs and souvenir T-shirts. It’s a tourist theme park, really.

Best part: on my last day, wandering outside the Centrum, and realising Amsterdam is an actual city:

To my relief, when I came back and got intentionally lost walking around town, I saw the flipside to Centrum. (I had a couple of destinations, but got gloriously lost by following the ring structure of the roads bordering Centrum.) I didn’t get a sense of the soul of Amsterdam—in the end, how could I in a couple of hours; but I saw that the flipside is a town that still has too many bikes, but also a place here people get work done, go out to dinner, and get home by 10. Not a particularly striking looking town, but lived-in. (This is not Vienna, which had a point to prove in its architecture; Amsterdam ran the world as a business, and was satisfied with individual affluence.) By the Plantage district, which was parkland until past the Golden Age, the town even loosens its belt a little, and allows for some greenery, and mansions that aren’t single file.

Moore puts forward the formation of an Australian English as a dialect koine in Sydney, within two generations of settlement, and then diffusing out of there rapidly. (There were no administrative barriers between provinces like in the States, hence the astonishing regional homogeneity of Australian English.) This is common sense, and reflects other koineisations (and creolisations). New Zealand has done a better job than Australians of tracking their linguistic history, and the accent data from the first generation of native born New Zealanders, available through recordings done in the 1940s, was critical to proving that contention. Their accents were not yet fully levelled, and even children growing up in the same small town had slightly different accents. It was only the second generation of native born colonists who had a local norm to peer pressure themselves into, and knock out any deviation.

In line with that, it was only after the second generation that dialect loans from Northern English and Scots into Australian English were possible. In the first generation, such words were still sensed as outliers from the emerging Southern-England based koine, and ruled out.

(Nice question, Aphrodisia Xanthopoulos! You and Aziz Dida should get together and plot more questions; the Greece feed has been getting boring lately.)

OP’s question touches on the old dichotomy in Greek identity between Hellene and Romios (Roman); see for example Romios or Hellene? It’s a dichotomy that may be dying down now, as the Hellenic/West European/high identity is overtly winning out over the Romaic/East European/low identity, but it’s certainly not dead yet.

I take some contrarian delight at being at odds with other respondents; but then, my construction of Greekness is as idiosyncratic as—well, Ioannis Psycharis’.

So. When I go to Athens, I see a little bit of Byzantine stuff, because Athens was a small regional centre; but the preponderance of stuff you see that isn’t crappy concrete high-rises in Athens is Ancient marble. Partly because of historical whitewashing: a lot of post-Classical stuff got shoved out of the way, to allow the marble to gleam in isolation.

And the marble looks like some highly advanced spacemen dropped this stuff off and left. It doesn’t gel with the Modern Greek landscape; it’s something Alien. 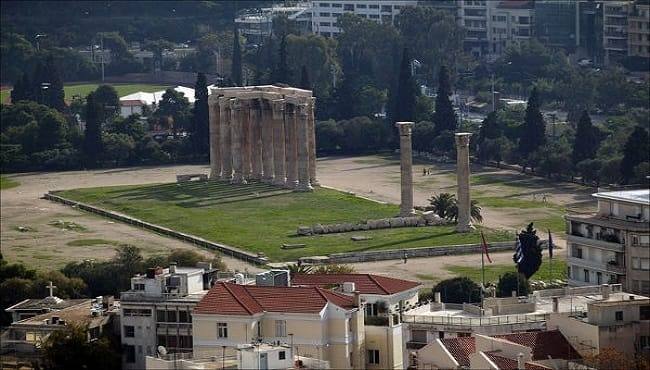 When I go to Salonica, on the other hand, I see late Roman and Byzantine stuff all around. That’s historical whitewashing too: the Ottoman and Jewish past of the city were allowed to pass from sight. But the landscape is immediately more recognisable, even with 1700-year old brick: 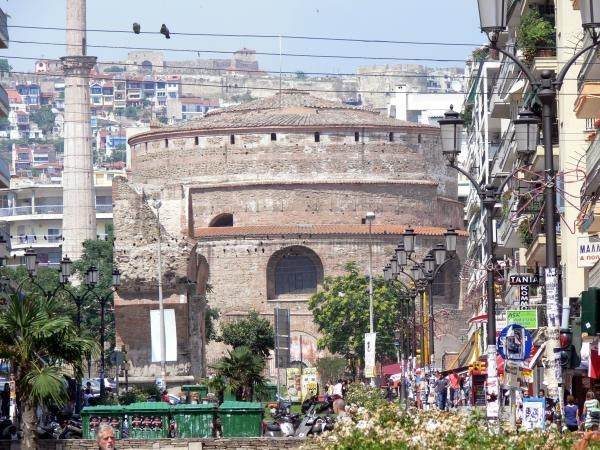 This doesn’t look like something space aliens dropped off. This looks like something that I can recognise ancestors of mine as having played a part in.

So. In answer to your question, I pick B over A: Byzantium over Antiquity. The Ancients created something that everyone in the West inherited, and that the West made a point of emulating. But they feel remote, and they don’t feel like ours alone. The history of the past 1000 years, however, is a history we can recognise ourselves in.

Yes, yes, I’m sure most Greeks disagree. But that’s how I feel.