As a consequence of my epoch making first Quora IRL meeting, Miguel Paraz and I decided that, since our workplaces are only two blocks apart, we really should catch up.

Miguel was on self proclaimed need holiday (not at work, not on Bali either), but he was kind enough to stop by the curry house opposite work.

And I do believe I have captured some pictorial evidence of the event. 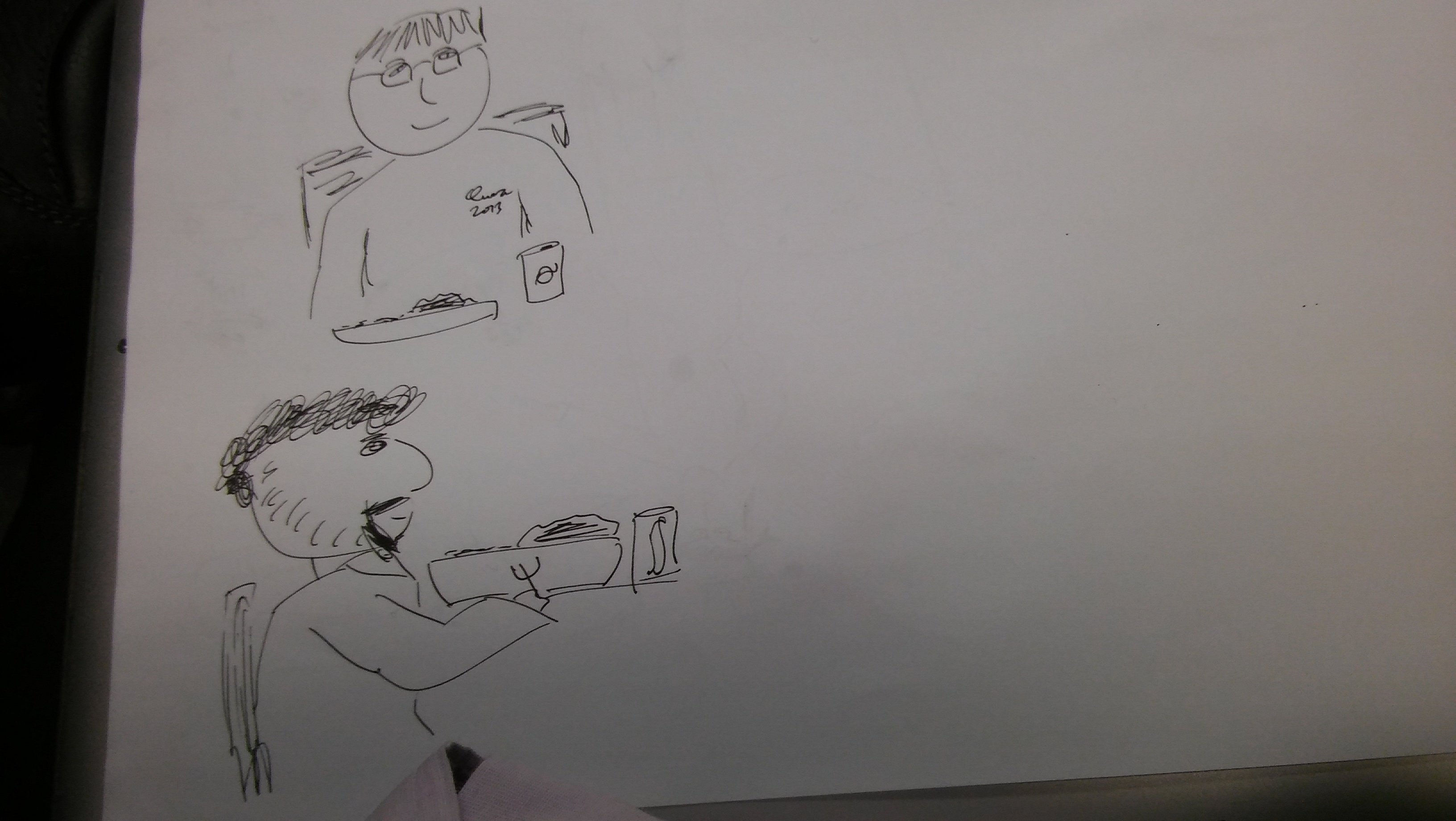 Yes, I do have a quite interesting understanding of the notion of perspective.

A pleasant afternoon was spent by all, with Miguel rather astonished that I know more about programming than I let on here on Quora. I promise to engage more with the geek side of Quora. And Miguel promises to do something about a Melbourne Quora meetup!

Well, what evidence can we draw on from Richard’s logs? 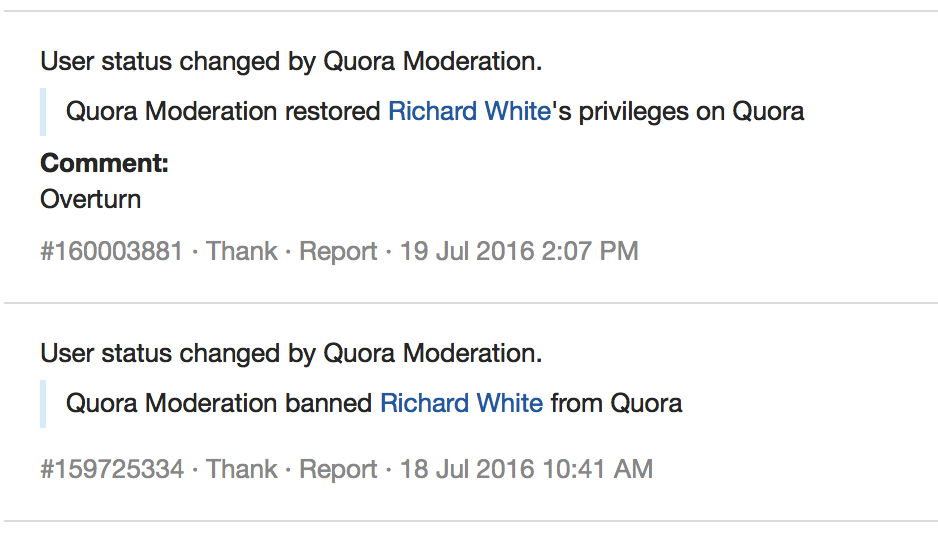 This suggests some sort of… strange ballet, one might almost say, between Quora moderators, with one mod colliding with another, and Tamsin the Wondercat smack in the middle.

A strange ballet that may even have looked something like this: 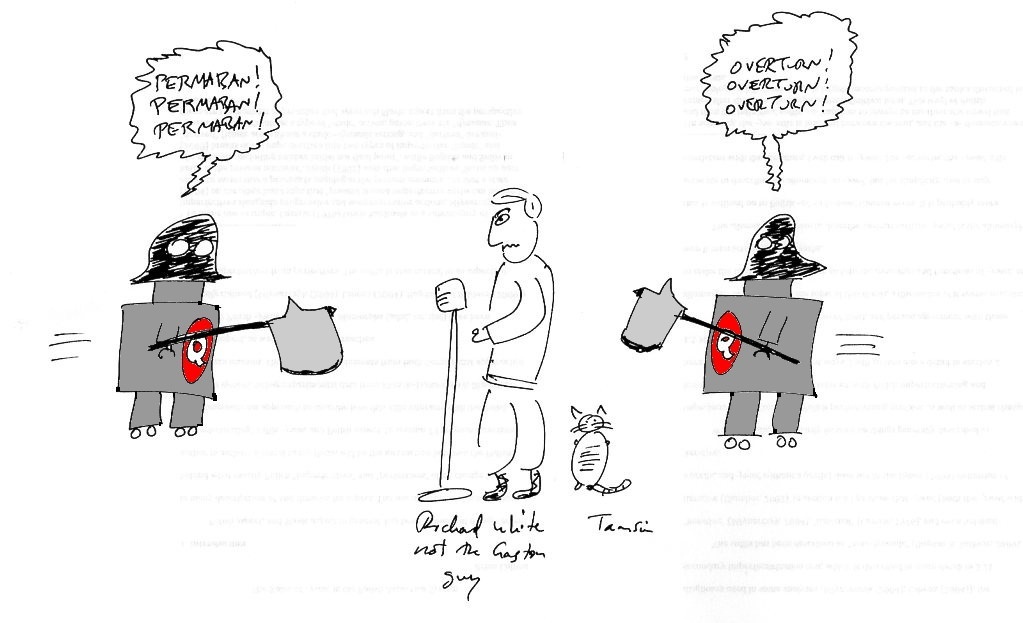 EDIT: Richard White’s answer to Why was Richard White banned from Quora? collapsed by a moderator, because “Answer doesn’t answer the question”.

The writers of 5th century Athens were considered to be the pinnacle of Greek writing—the orators, the dramatists, the historians. (Not so the poets, which was more an 8th to 6th century thing.) Their version of Greek was considered the most prestigious and was the model for all subsequent writing.

So they were the classical authors—the authors of the highest class, as judged by subsequent Latin-speaking generations; and their period was called the Classical period.

“Revolution” does not mean rivers of blood, storming the Winter Palace, and so forth. “Revolution” means the radical transformation of social insitutions. In that sense, of course I’m a revolutionary.

A follower of one of the Eastern Catholic Churches. These churches are doctrinally Roman Catholic, but their ritual practice is a continuation of Eastern Christian practice (Eastern Orthodox, Oriental Orthodox, and the Church of the East).

Byzantine Catholic in particular refers to a follower of a church that is doctrinally Catholic, but whose ritual is derived from the Byzantine rite Eastern Orthodox church. The Eastern Catholic Churches also include practitioners of other rites—West Syrian, East Syrian, Armenian, and Alexandrian.

In 1923, the Dodecanese were under Italian administration, and were not part of Greece. Therefore a small Muslim population remains to this day, in Rhodes and Kos.

Hm. Surprised at the low level of anthropology here. Lots of value judgements on both sides, but not a whole lot of history.

OK. The answer is tied up with patrilocality. See for example Why did society shift to patrilocality after the Neolithic agricultural revolution? And Patrilocal residence on Wikipedia.

Patrilocality is the arrangement where, when a woman marries a man, they don’t go off and make their own household: they stay with the household the man belongs to.

If you’ve just invented agriculture, and you rely on access to land for subsistence, then patrilocality makes a lot of sense. You don’t want to keep splitting up the family farm with every generation of kids, until it’s down to a postage stamp; and you don’t want to give a bit of the farm away to someone who isn’t going to stick around and help farm it. Patrilocality makes a lot of economic sense; it’s only in the modern, post-agricultural West that it makes any sense for new families to establish their own households.

Of course, patrilocality is not the only way of resolving the issue of how to keep the family farm in one piece. You can also have Matrilocal residence, where the couple stays with the household the woman belongs to. But that doesn’t mean that matrilocal societies are feminist paradises. From what Wikipedia tells me, in many matrilocal societies, the husband stays with his family, and only visits the wife “in their spare time” (so he can still tend to his parents’ farm). The father is disinherited from his own children (who stay with the mother)—but brings up his sister’s children (who are staying with their mother); so the family farm still stays together.

In any case, even if these practices start out because they make economic sense, they are perpetuated as tradition and value judgements. When Bing Sanchez (who lives in Greece) told me she was going to ask a variant of this question, I asked her to ask around for the definition of a sogambros.

Greece is traditionally a patrilocal society. A sogambros, literally an “inside son-in-law”, is matrilocal: he’s someone who’s living with his wife’s kin, instead of his own.

Traditionally, this is considered embarrassing.

There’s nothing rational about the embarrassment in modern society; in fact, there’s nothing rational about it even in traditional society. But the social pressure helps maintain patrilocality, and having either consistent patrilocality or consistent matrilocality is rational: everyone knows the rules, no scope for inheritance disputes (which would turn deadly in a subsistence economy), and the family farms stay intact.

What’s all that got to do with surnames?

The group identity of an extended family originates in the bunch of people who have the family farm in common, through inheritance. In patrilocal societies, that inheritance is from father to son.

Ditto surnames. Having the same surname means you’re part of the group who gets to farm the same family farm.