For the same reasons presented at Tatiana Estévez’s answer to Why does Quora delete all questions pertaining to the ban of Quora users?

It follows that the name Greeks traditionally gave their vernacular was Roman, Romeika, with Hellenic reserved for Ancient Greek. And this term entered 18th and 19th century English as Romaic.

Romaic passed out of usage by the end of the 19th century in English, as Demoticism gained ground and as Greeks grew uncomfortable with anything Greek being called anything but Greek. Romeika is obsolete now in Greek too, though many will still remember when people used to say “am I speaking Romaic to you?!” (same meaning as “English, m*thaf*cka, do you speak it?”). That’s “am I speaking Hellenic [Greek] to you?!” now, of course.

Habib le toubib, you already know about me having three cousins also called Nick Nicholas, and that I translated Hamlet into Klingon, so those things I won’t count as surprising.

So what should I count? 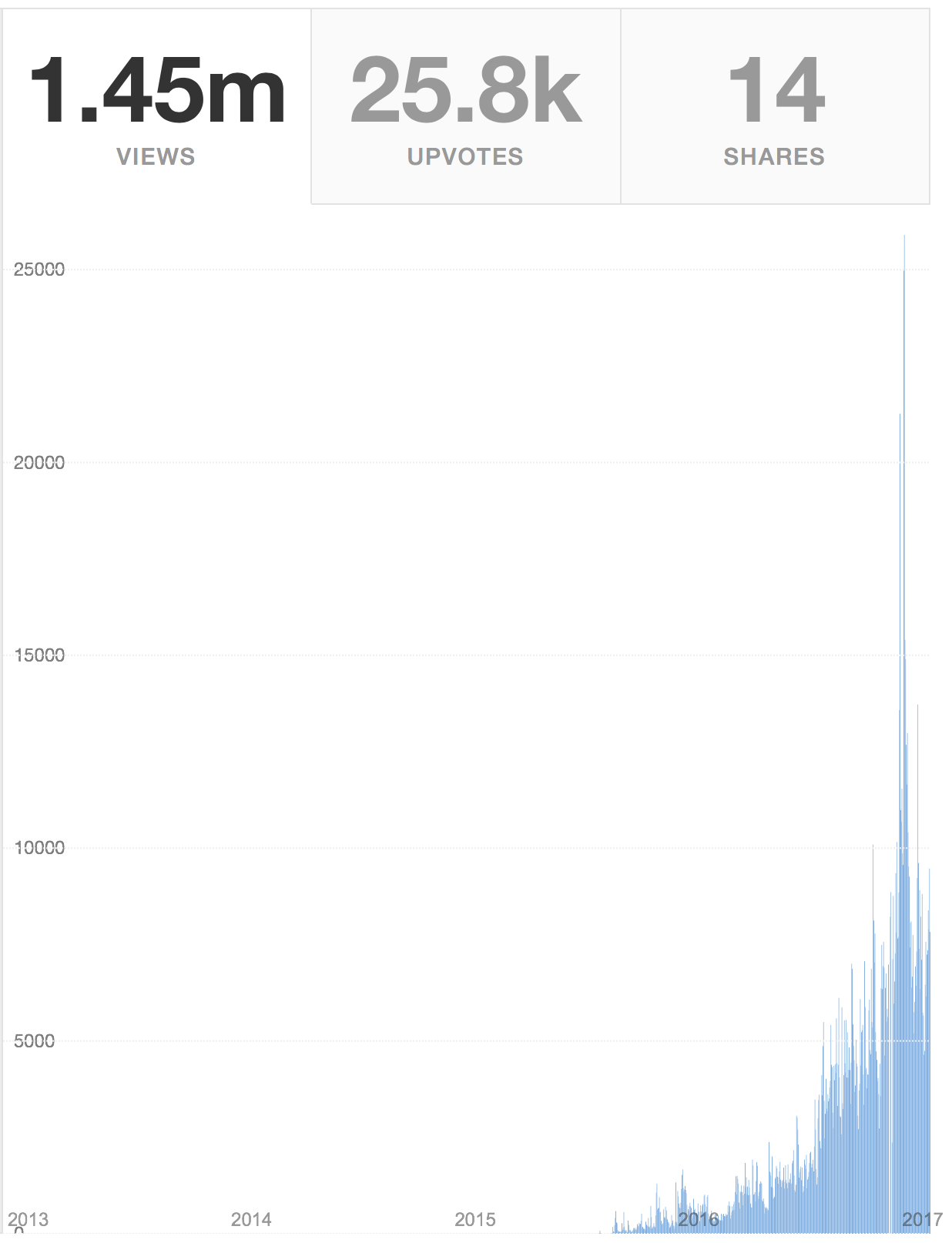 Of course, given that I joined in 2015, that makes my stats graph nowhere near as usefully granular as it could be.

Is there a way to view my Quora stats from the date you joined instead of 2013?

Not that I know of. Be grateful you can see your all-time stats at all. (Takes me about a minute.)

Not impossible. But not likely.

Let’s think this though, and the considerations for us thinking this through are not specific to Cyprus; they are pretty generic in etymology.

English was a donor language to Cypriot Greek while the British ruled Cyprus, from 1878 through 1960, and as an international language since. While there is English in Cypriot, there’s isn’t all that much; there’s a lot more Old French, Venetian, and Turkish. (Btw, if anyone reading thinks that Cypriot Greek tʃaera is a borrowing of English chair, stop that. It’s a borrowing of Old French chair.)

Second: could English apparatus have been borrowed into Cypriot, and conflated with the similar-sounding Cypriot apparos, to refer to ironing boards?

There’s several problems with such a possibility:

I think coincidence is a more plausible explanation here.

You were right, Kat Rectenwald! It really *was* a bug!

Still no quills in the followers or followees list though:

I’ll start by snarking that the culture Thomas L. Johnson describes sounds pretty nightmarish to me. But then again, for a very long time I refused to follow anyone with more than 1k followers.

The striking thing, reflecting after over a year of being a social butterfly here, is that there is no one culture on Quora. There are several quite distinct cultures going on, and they don’t intersect that much. The Indian Quora and the American Quora work very differently. The Discord teens’ Quora has different norms from the old growth Top Writers’ Quora — although the high school comparison has been raised more than once. Technical questions and political questions get very different engagement.

So there are clearly community norms, and even more clearly norms that Quora Inc seeks to inculcate through moderation and UX and consent. (Yes, I have been reading Gramsci.) But I would caution against regarding them as universally practiced. Or against assuming that old growth Top Writers are somehow more representative of Quora culture than Discord teens, say, or Americans more than Indians.

Are there commonalities? I think so.

But again, these days I see many more differences than similarities. Whether Quora is social media; whether the Company enables or hampers; the value of comments; the validity of homework questions or survey questions. I don’t see consensus around these, and I don’t see a unified culture around these.

(I disagree with Daniel Ross’ first point, that the emoji must be conventional and not iconic for them to be a language at all. I think the real issue is his second point, that icons can only go so far.)

(I will hold my tongue about Esperanto diacritics, because I otherwise like Daniel. ;^)

See also: Could emojis ever replace written language? Why or why not?

My concern, as expressed in that question, is what your verbs and syntax are going to look like, if your emoji-based language is not going to be just some rebus—or, as Daniel Slechta argues, extremely restricted in what it can talk about.

The challenge has been addressed in an actual symbol-based universal constructed language, Blissymbols. But I don’t think anyone would argue that Blissymbols’ verbs are intuitive.

Your fellow hardcore Romanophobes already have. Roman Empire has already had the following topics merged in:

The lack of any East Roman Empire topic is… not helpful, and it’s probably too much work now to introduce one.

Byzantines is the one remaining topic that allows us to narrow down anything between 330 and 1453. We could rename Byzantines to East Roman Empire, but the real work to be done is to unmerge Byzantine Empire, even if it means renaming it East Roman Empire, to placate Romanophobes. And the merger has been there for a while: it would need a lot more retagging.

The second and first aorists are equivalents of the strong and weak verbs of Germanic. Strong verbs and second aorists form their past tense by ablaut, vowel change. Weak verb and first aorists form their past tense by suffix. The older pattern is the ablaut; the newer and more frequent pattern is the suffixation. There’s more second aorists in Homer than in Attic.

As the new pattern generalises, the verbs that hold out in the old pattern the longest are very frequent verbs, which are quite entrenched in people’s memories, and people don’t feel as compelled to simplify. So εἶδον “I saw”, ἔβαλον “I put”, ἦλθον “I came”. Have a look at this list of frequent second aorists in the New Testament: Second Aorist

And the second aorist was stone dead by Early Modern Greek, but it did in fact enjoy a resurgence in the Koine, particularly with passives in the Septuagint. βασταγῆναι for example instead of βασταχθῆναι. Cf. Modern US English dove for dived: Dove vs. dived – Grammarist