There are two problematic premises in this question.

The second is that this is an emoji. As in, cutesy symbol intended for SMS use, promulgated by mobile phone manufacturers in Japan because they got lazy about rich text encoding, and sanctioned by the Unicode Consortium in a move that I will never ever forgive them for.

But the Hammer and Sickle symbol is not an emoji. It was not brought in by phone manufacturers, and it was not intended for Communist member parties to send cutesy messages to each other.

The Hammer and Sickle, U+262D, belongs to the Unicode Miscellaneous Symbols block. You can discern why it is there, by looking at its immediate neighbours:

Although I note with merriment (Peace symbols – Wikipedia) that the South African government tried to ban the Peace Sign in 1973, because it was used by opponents of apartheid.

The pleasant surprise when I started on the antidepressants: I was still me. I wasn’t zonked. (At least, not then.)

I took meds for generalised anxiety, and they definitely stopped me from panicking on the way to work.

What made me realise they were helping was the first time I absent-mindedly sang while I was at work. That hadn’t happened in quite a while.

What would a Trump presidency mean for Australia?

Already posted this in https://www.quora.com/What-will-…

Bob Carr was NSW State premier for a very long time, but always wanted to be Foreign Minister. He even managed to be one for a few months. He’s obsessed with American politics, as any Foreign Minister has to be, and almost creamed his jocks when he was on a panel with PJ O’Rourke recently.

Anyway. He was lapping up the limelight on the Australian govt TV news on election night. His assessment? A lot of countries in the region are going to be seeking out Australia, the only alliance Trump hasn’t dissed yet, to work out what the hell is going on with Trump. And Australia itself is going to very quietly reevaluate how tightly it is committed to the alliance, and whether having Australian generals take orders from Commander In Chief Trump is really such a great idea.

Laiko typically has seperate lyricists. The lyricists are often bona fide poets. And you can tell.

Two songs. The first is a bona fide pop song, that most Greeks will get up and dance a stern zeibekiko to. Bear that in mind. Lyrics: Alkis Alkeos Άλκης Αλκαίος. Music: Thanos Mikroutsikos. Singer: Dimitris Mitropanos.

My lips, parched and thirsty,
seek water on the asphalt.
Trucks go past me,
and you tell me there’s a downpour coming
and drag me into a damp cabaret.

We’re pacing together on the same road,
but our cells are separate.
We wander through a magical city.
I don’t want to know what we’re looking for anymore,
as long as you’ll grant me two kisses.

You gamble me on the roulette wheel, and lose me
in a nightmarish fairy tale.
My voice is now an insect’s voice.
My life is a climbing vine:
you cut me down and throw me into the abyss.

How need turns into history!
How history turns into silence!
Why do you look at me, Rosa, so numb?
Forgive me for not understanding
what the computers and the numbers are saying.

My love made of coal and sulfur,
look how time has changed you!
Trucks pass over us,
and I, in the fog and downpour,
sleep starving by your side.

The second is from an even more poetry-ridden source, the songs that came out towards the end of the Greek Dictatorship (1967–74). It was a time when censorship encouraged you to be obscure; and even if you weren’t alluding to politics, the population was inclined to read it in anyway.

The lyricist and poet is Manos Eleftheriou, Μάνος Ελευθερίου. I’ve already cited his Birds of the Netherworld in Which poem or song best represents Greece in your opinion?

The lost words and years,
and the sorrows covered by smoke—
Exile has found them reconciled as brothers.
The sudden joys that have come to me
were lightning in a black forest,
as were the thoughts I dared have about you.

And I speak to you in courtyards and balconies,
and God’s lost gardens.
And I keep thinking that the nightingales are coming,
together with the lost words and years,
everywhere where you used to be,
and now in the cold and snow.

Fate and the Season had set it down
that I should cast a line out in this world,
and that the night should turn a thousand years.
That he should sing at the end of the feast,
he who has known no kin,
and knock on the door of sorrow.

They were no stopped clock
in a ruined deserted household,
those roads that have led me out to wait.
The words I do not know, I bind them for you
with the people who have witnessed the evil,
and have it embroidered against their name.

He who sows tears and pain
reaps the ocean at dawn.
Black birds show him the way.
And he has a drawing near his shoulder,
a secret, fateful sign
that he has escaped Hades and the World.

There’s more than a few Greeks scratching their heads now. That’s not the lyrics they know.

Indeed they aren’t. The song came out after the Athens Polytechnic uprising, in 1973, when the tanks rolled in and crushed the protesters. People assumed that’s what Eleftheriou was alluding to, and the lyrics were tweaked to make the allusion slightly more explicit.

The sensibility of the verse was not cheapened.

He who sows tears and pain
reaps death at dawn.
Black birds show him the way.
And he has a wound near his shoulder,
a secret, fateful sign
that he has escaped Men and the Law.

Fate and the Season had set it down,
Friday night at nine,
that the night should turn a thousand years.
That he should sing at the end of the feast,
Friday the Killer’s night,
and knock on the door of the people.

Can you swear without dysphemisms?

Yes: swearing involves using profane vocabulary; dysphemism involves negative, offensive terms for particular things. You can swear without dysphemisms, and indeed without having any negativity at all, through the use of profanities as positive intensifiers:

Can you use dysphemisms without swearing?

Example? Wikipedia has an excellent one. In many cultures, using a proper name for your elders is disrespectful, and hence gives offence: it’s a dysphemism. Hey Janice, where’s lunch? instead of Hello mother, where is lunch? But it isn’t swearing: it isn’t the same as Hey bitch, where’s my food? There’s nothing profane in itself about the name Janice.

This question is going to be answered by two Nicks: the Greek, and the Australian:

You know what white people do? They go on Quora and they ask who else is white! That, my friend, is what we here in the Navel of the Earth call Αμερικανιά. How you say… Squirt of American? Something like that.

You have no eyes there in the Americas? You wonder who is white, and what they like? You should come to Europe man! Φάτε μάτια ψάρια “Eyes, eat fish!” as the Greek saying goes. Lovely spectrum of colours here!

You know why they say this? Because they are nazis!

You know what the nazis in Greece don’t say, Habibi? “You’ll never be white.” Who gives a shit about colours in Greece, man. Squirt of American, that’s what that is.

Can you balance a wine glass on your nose while dancing? 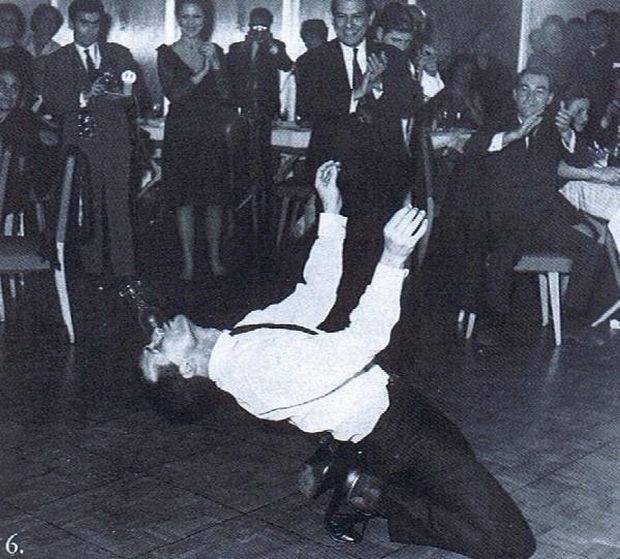 These are the real issues that matter!

Now, there is some roast goat coming out of the oven, man, you will be licking your TOES when you’re done with it. You’re going to love it.

Meantime, we dance! Όλα τα παιδιά στην πίστα! (“Everybody on the dance floor!”)

Άλλα της! (“Allah to her: inexplicable exclamation of Greeks while dancing”)

Yeah. He… gets a bit loud when he’s excited. Sorry, mate.

So, mate. Don’t listen to the Greek guy, mate. He was brought up in the most white-bread part of Greece. Like, so white-bread, they didn’t even have reffos there from Turkey.

So, mate. I hear ya. Whites. Listen, here in Australia, we’ve had racism. A lot of Australia still does. So I kinda get it.

But I still kinda don’t. ’Cause all this “what do white people like” bizzo is, ah, how did the Greek guy put it? Ameree Kanye? Or as we call it down ’ere in God’s Own, “Seppo shit”.

Seppo, mate. Rhymin’ slang. Like, Seppo for Septic Tank. As in, Yank.

Right. So, yeah. We have had racism, and it was based on skin colour. If you ask any Aborigine to this day, ’ken oath there’s such a thing as Whitefellas, an’ things Whitefellas like.

I don’t reckon White Aussies got that when the Yolgnu mob were doing Zorba? They were making fun of things Whitefellas like. The Greeks back in Greece sure didn’t.

Yeah, I dunno, mate. It’s like all white people look the same to them, or something.

Back in the day, they were British. That melting pot youse guys had in America didn’t happen here, so they didn’t have to fall back on “white” as an identity. They still got to have a culture the way normal people get to have a culture. You know? Tribal and national affiliation.

And then, they got to be Anglo-Celts. And to all the immigrants that came here, they were called Aussies.

Or Skips. Glorious moment when that happened.

Wozzat? Jesus. Skippy the Bush Kangaroo. It was a TV show. With ’roos on it. Like Aussies are.

But anyway. Point is, mate, some White people over there in Seppoland realised that black people are cool, and concluded that they weren’t cool. So they started making fun of themselves. Things White People Like, and shit like that.

Aussie White people? Like, Skips? Mate, we’re pretty sarcastic here and shit, but d’you reckon Skips would ever be embarrassed to be what they are? And make fun of what White People like? Fair suck of the sav, mate! Mate, Aussies, all Aussies, have more front than fuckin’ Myer’s, mate!

Wozzat? Oh FFS. Myer’s. Big department store. Founded by a Jewish guy in Bendigo. Yeah. It’s a saying. Means they have a lot of front. As in, no shame.

You gotta learn how to talk ’Strayan, mate.

But we’re not gonna talk about White people. I reckon Indigenous Australians have earned the right to do that themselves. We’re just Aussies.

White People like to wish they were Aussies, mate.

Now. Come over and have a beer. Me mate’s got a barbie going, and we’re supposed to bring a plate.