As in, who is Occam’s razor – Wikipedia named for?

Occam’s razor (also Ockham’s razor; Latin: lex parsimoniae “law of parsimony“) is a problem-solving principle attributed to William of Ockham (c. 1287–1347), who was an English Franciscan friar, scholastic philosopher, and theologian. His principle can be interpreted as stating Among competing hypotheses, the one with the fewest assumptions should be selected.

William of Ockham (/ˈɒkəm/; also Occam, from Latin: Gulielmus Occamus; c. 1287 – 1347) was an English Franciscan friar and scholastic philosopher and theologian, who is believed to have been born in Ockham, a small village in Surrey. He is considered to be one of the major figures of medieval thought and was at the centre of the major intellectual and political controversies of the fourteenth century. He is commonly known for Occam’s razor, the methodological principle that bears his name, and also produced significant works on logic, physics, and theology. In the Church of England, his day of commemoration is 10 April.

Ockham, Surrey – Wikipedia. Only one pub for a village of 400 people. I’m disappointed.

Another comment asks if we remember the time when people didn’t have to promote themselves on Quora—I think people always did, if, perhaps, more naively, and more narrowly. But now the hucksters have figured out the system, as they do.

Instead, we’ve dug down and built dens and hollows in the earth, showed each other the tunnels and mistaken it for the surface. And when one of the peacocks manages to peck into the tunnel, we shudder and tell ourselves that it’s not of this world. It’d be too terrifying, otherwise.

The BNBR is fresh. It still smarts.

This question was disfluent in its English when first asked—

Michaelis Maus, what made you even more attracted to yourself when you noticed (only) latent pretending tendencies on the internet?

What made Michaelis Maus even more attracted to themselves when you noticed (only) latent pretending tendencies on the internet?

then, remarked on by Michaelis, and then lobbed over by Michaelis to me; I have an occasional, distant fan relation with Michaelis, because I try not to inhale. (John Walton has more of a symbiosis.)

The wording is still confusing; I’ve tried to clean it up.

What made Michaelis Maus even more attracted to himself when he noticed (only) latent tendencies towards pretension on the internet?

Is it online pretence or pretension that is supposed to have made Michaelis even more of a nihilistic narcissist? And why is that I’m supposed to know the answer?

Let’s speculate. What would make Michaelis even more of a bad seed through online interaction?

If Michaelis has seen people be pretentious online, he has discerned that they have feeble grounds to be pretentious about, and he can be pretentious with much more class and conviction. Who of the pretentious wears his fashion like he does? Who knows the ins and outs of an Oxford shirt as intimately? Who can twirl his moustache so non-chalantly? Who can ruminate so debonairly on the impracticalities of containing his titanic schlong within his life partner’s purloined briefs?

Michaelis Maus’ answer to What is one thing popular Quorans would like to say to their followers?

Stop reading my writing and start thinking for yourself; after all, what is morality but violence ossified by history?

In Frege’s classic formulation of Sinn und Bedeutung, sense is the definition of a word’s meaning, which is decoupled from the denotation of a word—what it references in the world. The decoupling is necessary so that words can have distinct meanings even if they refer to the same thing, or to imaginary beings.

For more, see Nick Nicholas’ answer to What is the meaning of meaning, philosophically speaking?

The only google hits for this phrase is this question, and a contract saying “The Supplier shall deliver the products selected and ordered by the means chosen by the Purchaser or stated on the website”. Which likely isn’t it.

If the notion is of ordering as in sorting, putting some entities in order, the means might be the statistical Means: you have a set of sets, and those sets are ordered by their means (more commonly referred to as averages); there are two google hits for “ordered by the averages”.

Will you take a UML Sequence diagram? I like those. 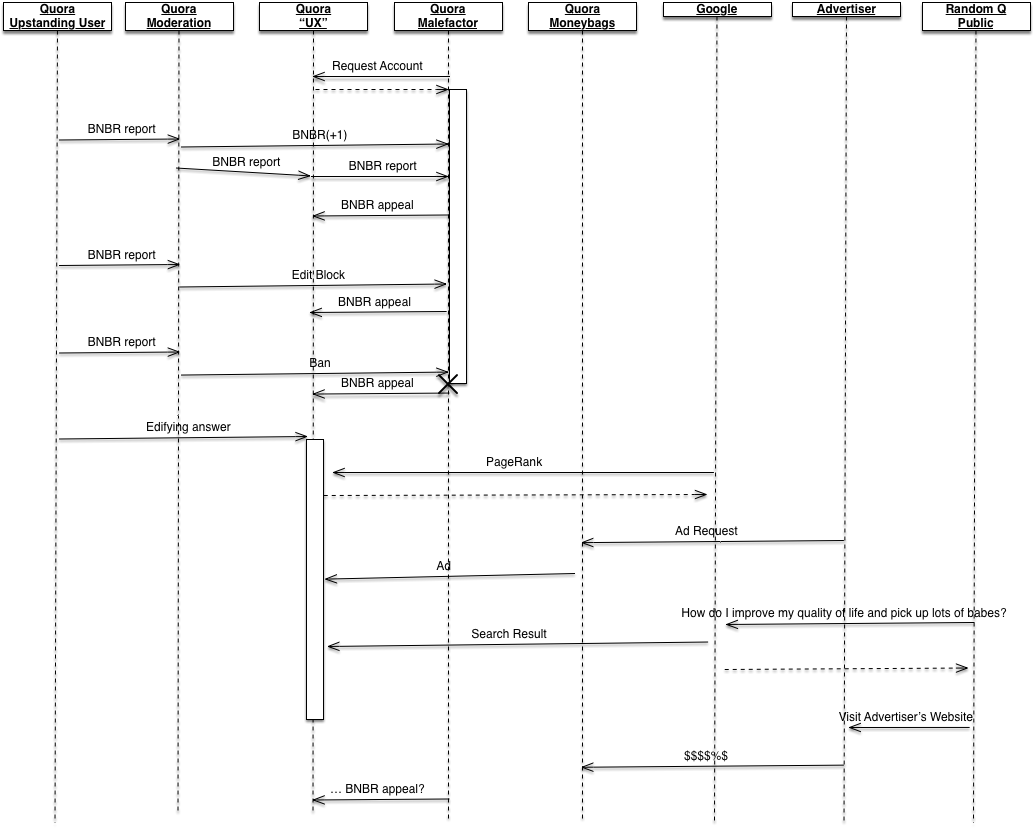 Some might say this diagram is a little… cynical? Perhaps. (I didn’t put anything in about design though!)

But of course, this is a speculative question anyway; Quora is very chary about sharing details of how it works internally.

Xenophon, Anabasis (as a shout-out to Desmond James):

Cleander, you have the men; the army has bowed to you and assented to do what you wished with respect to these two members of their body and themselves in general.

Indeed, had you not arrived, we should ere this have begun our march upon the king.

So. As Stephen Nelson continues to be thrown by the middle voice, I continue with the series “Ancient Greek Middle Voice: Booooo”, last installment being Nick Nicholas’ answer to Since the active and middle voices of the 2nd aorist forms of “to stand” are intransitive (ἵστημι – ἔστην vs ἐστάμην), are these forms synonymous?

Which would be just like Greek. And yes, we are unlucky.

LSJ, what sayest thou?

And then refines them:

Lovely. So how do the voices match up with these?

The start of the entry on ἵσταμαι is in fact a giant mapping of verb tenses to the two classes of meaning. But you should already know how this is going to go, from the definition of B. And because this is Greek:

The mappings given are:

The bad news is that there are active forms that still mean “to be standing” and not “to stand something up”.

The very very good news is that this was too confusing even for the Ancient Greeks, so they made sure that the active tenses that meant “to be standing” and the active tenses that meant “to stand something up” did not look like each other: ἔστησα vs ἔστην, ἕστακα vs ἕστηκα (with an exception in one text). There’s also ἵστημι vs ἑστήκω and ἑστήσω vs ἑστήξω, and that’s actually a brand new verb made up from the perfect intransitive ἕστηκα.

The actual question Stephen is asking is: if the active perfect ἕστηκα and the middle present ἵσταμαι both mean “to be standing”, is there some nuance of meaning differentiating the two?

I really hate to say yes, especially given the last answer I gave, but probably yes. A perfect tense is all about being in the aftermath of something, in a state resulting from something. So a perfect tense for “I am standing” is going to be more stative, more durative, than a simple present; maybe more like “I’ve been standing”. You will see some Greek grammars awkwardly hint at this with “I have set myself” vs “I stand”, or as with this German PDF, ich stelle mich “I place myself” vs ich habe mich gestellt => ich stehe “I have placed myself = I stand”.

Unfortunately Greek grammars were mostly written in the 19th century, when people still had a very vague notion of semantics. I’m sure some linguistics postgrad somewhere has worked out a proper treatment of this distinction in the past 50 years, but it won’t have made it into the teaching grammars.

To confirm what Alberto Yagos said:

The complete anthologies by Stobaeus, pretty clearly, have not been Englished.