In A cis lament for the Greek language, I posted on the difficulties of rendering transgender and intersex in Greek. The solution I reported there seems not to have been the settled solution. I did some further reading since, and this is an expanded version on the challenges that were involved.

The first challenge to rendering transgender and intersex in Greek is that, like most languages Greek does not have a distinct word for sex and gender. An added complication is that all the words Greek does have for sex (or gender) are derived from words for ‘tribe’ (since that’s how Greeks first conceived of sex—as two different tribes of people); and any words based on ‘gender’ or ‘sex’ are going to sound like they’re referring to ethnicities or nations instead.

The word genos for example is used for grammatical gender; outside of grammar, it only means ‘ethnicity’. The word that has prevailed is phylon (our phylum), and that is uncomfortably close to phylē ‘race’. So phyletikē diakrisē is ‘racial discrimination’, although the default term for that is ratsismos. (And ratsismos has been extended to mean bigotry in general; it is used to include homophobia and sectarian prejudice, for example.)

Which means that there is no good adjectival form for phylon, to mean gender-related. Any attempt is going to sound too close to ‘racial’; and the default solution, phylikos, is pronounced identically to the well established philikos ‘friendly’. (I’m using Ancient Greek transliteration here to help readers recognise the terms; in Modern Greek, they’re both filikos.)

Here, Modern Greek has used a nice trick. While the default strategy for forming adjectives is to suffix an ending like –ik-, an alternate strategy is to prefix en– ‘in’. There is a subtle meaning distinction, which, like all subtle meaning distinctions, is not always there: the ‘in’ adjectives have a connotation of the noun being immersed, imbued with the adjective quality, whereas the -ik- adjectives can just mean the noun is about the adjective quality. So metrikos is ‘metrical’, ‘about metre’; emmetros is ‘in-metre, put in verse’. A treatise is metrikos if it is about verse; it is emmetros if it is in verse. Similarly, rhythmikos is ‘rhythmical’; errhythmos is specifically ‘in rhythm, with a beat’. Psychikos is ‘relating to the soul’ (psikhiko in the vernacular is almsgiving, which is done for the good of your soul); empsychos is ‘having a soul, animate’.

So gender studies are emphyles meletes, and gender identity is emphylē tautotēta. It’s not an identity about gender; it’s an identity in gender, realised through gender. (Of course the real reason for this being adopted is that the default formation phylikē tautotēta would be misunderstood as ‘friendly identity’.)

Because emphylos has been established as a rendering of English ‘gender’ as an adjective, the Greek renderings of transgender have used emphylos rather than phyl-ik-. That could be generalised into a notion of phyl– ‘sex’ vs emphyl– ‘gender’, given that homosexual and heterosexual already use phyl-: homophylophilos, heterophylophilos. In fact the coinage I reported last post, too clever by half, differentiated transgender and intersex as di-emphyl-ikos and dia-phyl-ikos. It really was too clever, and it hasn’t stuck.

That was the first puzzle to deal with. The second is that Greek is very proud of its prepositional prefixes, but none of them is a precise match for trans-.

Greek does have a precise adverb match for trans and cis, the Latin for ‘this side of’ and ‘the other side of’: enteuthen and ekeithen. The Latin expressions where trans and cis got the most exposure were Transalpine and Cisalpine Gaul: Gaul on the other side of the Alps (= France), and Gaul on this side of the Alps (Northern Italy, which was still Celtic). The Greek renderings of those were Galatia ekeithen tōn Alpeōn and Galatia enteuthen tōn Alpeōn. But as you can see, that’s an adverb, not a prefix. So it won’t work for transgender.

Greek has no less than four prefixes that have been used to render trans– ‘other side of’.

And if diaphylikos was rejected for ‘intersex’, what has been used instead? The NGO pamphlet I found that was up on all the current terminology didn’t use any of the above. It used mesophylikos.

I don’t think it’s necessarily a coincidence that mesophylikos corresponds exactly to the title of a renowned novel with an intersex protagonist, written as it happens by a Greek-American: Middlesex.

Ah, I see we have an instance of that special being we call in Greek the glōssamyntōr, the “language defender”.

Harold Evans, Fleet Street editor, eh? Of the Street that gave us Lynne Truss? And in turn the immortal book review of Lynne Truss, Bad Comma? (“An Englishwoman lecturing Americans on semicolons is a little like an American lecturing the French on sauces.”)

I will make like John Gragson Esq., and comment on these and how I came to know of them.

Harold Evans. Editor of the Sunday Times from 1967 to 1981; 88 years old and retired, now dedicating his time to writing. Writing lists like these. God help us all.

A high school Latin grammar. One of the many school textbooks my uncles and aunts left behind in my granddad’s shed, which I read in primary school.

I was fascinated by the declension tables and the familiar lexicon, and I taught myself enough Latin to stumble my way through Cornelius Nepos. (“His simple style of writing has made him, in the UK at least, a standard choice for passages of unseen translation in Latin exams, from prep school, even up to degree level.”)

Then, I was inspired to create my own conlang. Which featured declension tables heavily.

Then, I started going through the Teach Yourself language books in my local library.

Then, when I was finishing my engineering degree in University, I met a girl at a party who was doing historical linguistics. And I sat in on her lectures.

And that was it.

EDIT: God bless the Greek government for digitising all their past textbooks. I was looking for Achilleas Tzartzanos’ classic Syntax of Modern Greek; I’d forgotten that the Latin Grammar I’d found in the shed was also his: 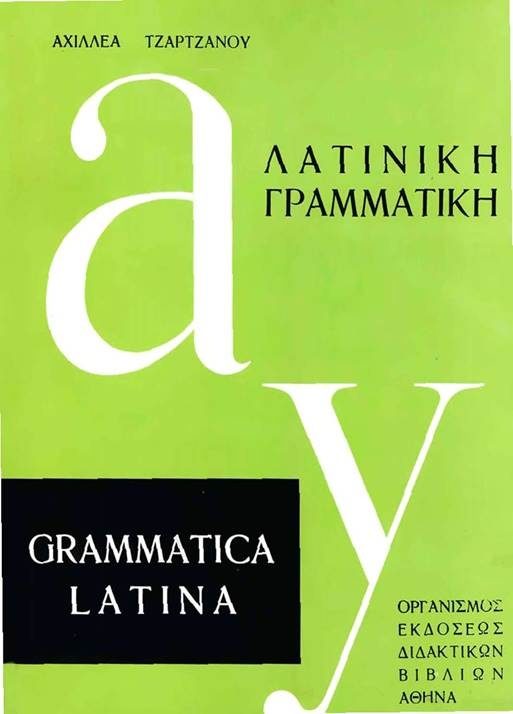 Greeks did not adopt Roman numerals, like, ever. (“Roman Numerals? We taught those beef eaters everything they know!”) Where the West uses Roman numerals, Greek continues to use Greek numerals; see examples in Nick Nicholas’ answer to Is it possible to shorten the ordinal numbers in modern Greek? I’m honestly not aware of any tradition of using Roman numerals in Greek, outside of as a third level of numbering (like how English goes from 1, 2, 3 to a, b, c to i, ii, iii: Greek numerals are already equivalent to a, b, c, so Greek needs an alternative.)

Manuel Glyzonios’ Arithmetic (Λογαριαστική), published in 1568 in Venice, certainly used Arabic numbers, and the Glitzouni was how Greeks learned arithmetic for the next few centuries. (A PDF used to be online at Ελληνομνήμων, a repository of texts at Athens Uni about the history of STEM in Modern Greece. Long disappeared of course.) O Εμμανουήλ Γλυζώνιος και η Λογαριαστική του,πιο γνωστή ως Γλυτζούνι cites it as saying:

You should know that the so-called nulla, which we put after 1 and count it as 10, is called in Hellenic [= Ancient Greek] nil (ouden), and for that reason it only takes up the position of a number.

Greek now calls zero mēden, which is a synonym of ouden.