Quite apart from whether it’s a well written article or not, James Fallows is not just some random Quoran posting punditry in his PJs eating Cheetos.

Well, he may do that too; but Fallows is a journalist and writer of long standing in the mainstream media, who I enjoy seeing on late night Australian TV now and again; and I enjoyed reading his work in The Atlantic, back in the days before Quora became the only site I read. Since he’s a mainstream journalist, he gets immediate name recognition as an outside-of-Quora writer; and I wouldn’t be surprised if Quora (which had invited his answer in a Session) pushed his answer along to get more views.

On smelly things: the evolutionary account I’ve seen is, to transmit smells of interest back to the den, to keep the other canines informed. All interpretations of dogs as wolves in dens, of course, you should read with caution. And the answers to Why do dogs sniff the grass and suddenly start rolling their bodies over it? have a rather different take.

Like Shannon Gilles said: to submit, and thence to ask for belly rubs. When Jenny the annoying lab–kelpie mix with abandonment issues switches from exposing her belly 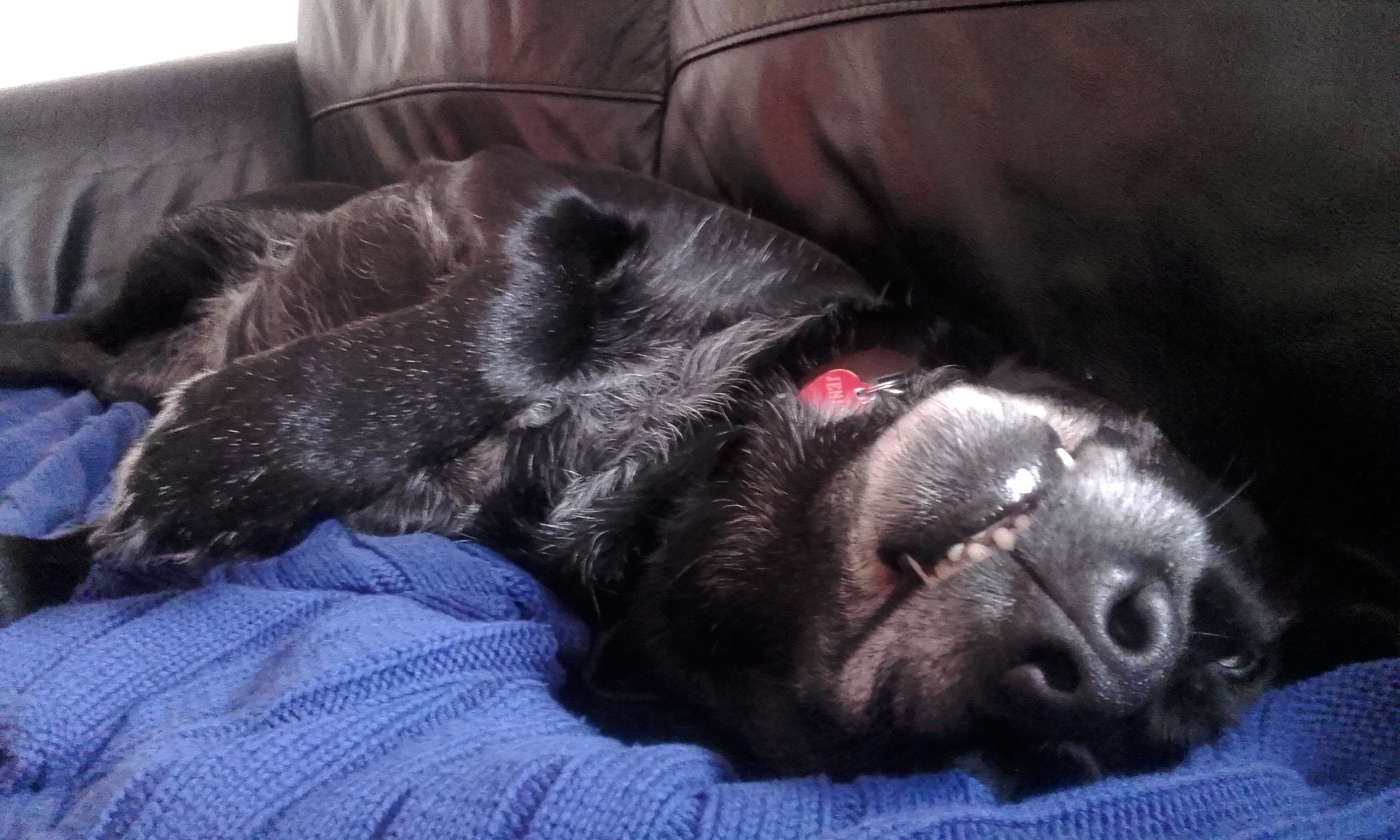 to wiggling insistently (as if she’s found some delectable animal corpse, only she’s on porcelain tiles in Schloss Nicholas, which were laid down before I inherited a canine), and sticking out her dodgy leg, then we believe she is demanding not so much a belly rub, as a leg rub.

Yes, the fricking dog gets leg rubs. Why do you ask?

Original wording: Which dialect (hesitate to call it that) of Greek is being used in this translation of the Iliad?

You do well, my synonomatos [fellow Nick], to hesitate: “dialect” is not quite the right thing to call it.

This is the 1904 translation of the Iliad by Alexandros Pallis. A Liverpudlian Greek like our very own Kelley Spartiatis.

What would you call it? If you’re talking to Greeks, Psycharist Demotic. You could call it Longhair Demotic or Extreme Demotic; but then I’d have to slap you.

If you’re not talking to Greeks, Early Demotic. Where Demotic Greek is not the vernacular of Modern Greece per se, but the codification of vernacular Greek as a standard language.

When people were initially writing in the vernacular in the 19th century, they were just writing in their dialect; you can say that of the Ionian island writers such as Solomos and Polylas.

The first generation of demoticists, advocates for the vernacular as the basis for the standard language of Greece, were led by Ioannis Psycharis. The language he advocated for was purist, in that he rejected morphological and phonetic compromises with the archaic norm Katharevousa. And in that first iteration of a written normalised vernacular (dismissed by the establishment as “longhair”, the same way the later hippies were), Psycharis and his followers took the opportunity to do some orthographical simplification, making spelling more phonetic. Which is what you’re seeing in the translation.

I wouldn’t sneer. The spelling of the vernacular took a while to settle down; and there has been a resurgence of phonetic simplification in the last few decades. I was taught τραίνο and αυγό, for example. I’m pretty sure you were taught τρένο and αβγό. And Nick Nicholas’ answer to How is “o po po” written in Greek?

The next generation’s version of Demotic, led by Triantafyllidis and Tzartzanos, is the version that prevailed (more or less). It made a lot more concessions to Katharevousa, and Psycharis dismissed it with his magnificently Demotic word for “half-way”, μεσοβέζικη. But Psycharis was in Paris and Pallis was in Liverpool; Triantafyllidis and Tzartzanos were in Greece, writing the school textbooks, and they had a much better sense of what was feasible within Greece.

While standard demotic did not go the way Psycharis had hoped, literary Demotic stayed closer to the rural ideal for another generation; it was only after WWII that literature made itself comfortable in what was an urban language. So if you read Greek literature from 1900 through 1950, Pallis’ translation should not sound utterly alien, though it will sound like it has the folksy dial up to 11.

There’s a little bit of awkwardness in the versification, but I like it.

The microservice instance I’m involved with has switched from Kafka to NATS. Our main reason for that was (a) native support of Golang, and (b) flakiness in Zookeper. Zookeper is not Kafka’s fault, but it was getting to be a problem for us.

The other answers are right, but the links contain the official Quora policy: copyright resides with the authors, and the authors, per the terms of service

Quora’s licence to use your content is expressly non-exclusive.