As I said about another question to Snežana Đorić (Снежана Ђорић): thanks for the A2A, Hinrich, as if I don’t have enough of a bullseye on my back already.

It’s an interesting question, and it’s also one that’s not going to get many dispassionate answers. I’ll expand on the answers given by Gustavo Pedroso and Markus C. Dehning.

What does it take for a country’s ruler to be demonised in the West?

The criteria for demonisation, I would argue, are genocide and being an enemy of the West. The former is disputed for Atatürk (and certainly does not constitute mainstream Western opinion); the latter is not the case. So that’s why.

Mussolini, to take another example, was an enemy of the West, but did not participate in genociding Jews (though they certainly treated them poorly). Because of the weakness of the Italian army in WWII, he ended up ridiculed rather than demonised.

The case of Pol Pot (genocide, enemy of West but not actively warring with the West) suggests that genocide is a more potent criterion than being an enemy.

What you’re seeing as Cretan murals, dug up from Knossos, look shinier and more vivid than anything dug up from Pompeii, don’t they.

It’s almost as if… their painting is modern.

And indeed, they are. When you see Cretan murals in situ, they are mostly modern reconstructions; the original bits are the dull looking, barely coloured flecks. 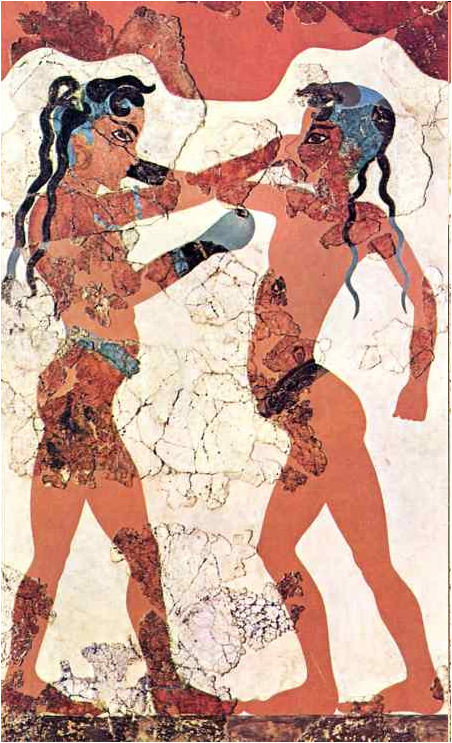 In fact, because of the tenuousness of the reconstruction, the subject matter of the murals can be gotten gloriously wrong. 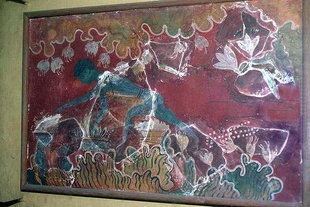 The Saffron Gatherer: before 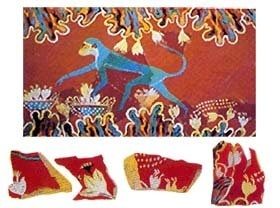 The Saffron Gatherer: after

Fellow Quorans of India, there’s a surprising omission in this list, which I’ve seen repeatedly on Quora, and indeed on Ravi Indra’s answer to this question: https://www.quora.com/Which-Engl…

Alphabet is used in the subcontinent, where the rest of the English-speaking world uses letter (of the alphabet).

Gospel of Thomas for me as well: Parable of the assassin:

The kingdom of the father is like a certain man who wanted to kill a powerful man. In his own house he drew his sword and stuck it into the wall in order to find out whether his hand could carry through. Then he slew the powerful man.

I can’t blame the Jesus Seminar for considering it plausible, precisely because it is so shocking. The Kingdom of Heaven that Jesus preached, being not only the inheritance of the meek, but also the slaughter of the strong.

And of course, on the looney tunes spectrum, the parable of Christ the Axe Murderer in the Infancy Gospel of Thomas. This is Wikipedia’s subdued summary:

The text describes the life of the child Jesus, with fanciful, and sometimes malevolent, supernatural events, comparable to the trickster nature of the god-child in many a Greek myth. One of the episodes involves Jesus making clay birds, which he then proceeds to bring to life, an act also attributed to Jesus in Quran 5:110, although Jesus’s age at the time of the event is not specified in the Quran. In another episode, a child disperses water that Jesus has collected. Jesus, aged one, then curses him, which causes the child’s body to wither into a corpse. Another child dies when Jesus curses him when he apparently accidentally bumps into Jesus, throws a stone at Jesus, or punches Jesus (depending on the translation).

When Joseph and Mary’s neighbors complain, they are miraculously struck blind by Jesus. Jesus then starts receiving lessons, but arrogantly tries to teach the teacher instead, upsetting the teacher who suspects supernatural origins. Jesus is amused by this suspicion, which he confirms, and revokes all his earlier apparent cruelty. Subsequently he resurrects a friend who is killed when he falls from a roof, and heals another who cuts his foot with an axe.

Or, as I like to retell it as a party piece:

… Yes I am male and straight. Where are you going with this?

Only the Australian versions though. I find the US originals boring. Hence me asking the question.

A few things that stand out for me with the Australian versions, to get this started. As I’ve found the US original boring, I don’t know for sure what doesn’t happen in the US version.

The Royal Commission into the Protection and Detention of Children in the Northern Territory is a Royal Commission established in 2016 by the Australian Government pursuant to the Royal Commissions Act 1902 to inquire into and report upon failings in the child protection and youth detention systems of the Government of the Northern Territory. The establishment of the commission followed revelations broadcast on 25 July 2016 by the ABC TV Four Corners program which showed abuse of juveniles held in the Don Dale Juvenile Detention Centre in Darwin.

The executive of the Aboriginal Medical Services Alliance Northern Territory said that Turnbull undermined the royal commission by permitting Chief Minister Adam Giles, who had ultimate responsibility for the events at the Don Dale Youth Detention Centre, to have a say in drawing up the terms of reference. Peak Aboriginal organisations, including the Northern and Central Land Councils, AMSANT, the Aboriginal and Torres Strait Islander Social Justice Commissioner and legal groups, were also critical of Martin’s appointment. The federal Opposition said they were not consulted in the drawing up of the terms of reference, and called for the appointment of two Indigenous co-commissioners.

The sainted Gough Whitlam did make a difference, just as the somewhat less sainted Lyndon B. Johnson did in the US. That took leadership, but it also took timing. Gough or Lyndon in 1920 wouldn’t have achieved as much.

Yes to what Clarissa Lohr said, and no to what Darius Vukasinovic said. (You still at Monash, Darius? I live in Oakleigh.)

I said “have much to do”, not “is unrelated to”: the past meanings do colour the present grammatical meanings. But you can use I will speak in contexts when you don’t particularly want to speak at all. In fact, there’s a nice passage in the Memoirs of Sylvester Syropoulos, which illustrates the corresponding change in Greek quite well: the Emperor says to the Patriarch “you want to speak in favour of Church Union”, when it’s clear the Patriarch wants no such thing. That’s Greek “want to” grammaticalising into “will”, exactly as was happening at roughly the same time with English will.

Of the auxiliaries of English, to be is more contentious, because there was not a lot of content there in the verb to being with. But there is clearly a difference in syntactic scope between I am a walrus, I am red, and I am speaking. That too is consistent with grammaticalisation.