Proper nouns in English are not normally qualified by adjectives; the adjective would be taken to be part of the proper noun (This is Lucky Phil).

Some authors do qualify proper nouns with adjectives, although as this discussion notes (Adjective with proper noun), it is stylistically quite marked (“Stylistically, attributively modifying a proper noun isn’t something people do in normal conversation. It strikes me as newspaper-ese”.)

When that does happen, the proper noun is considered to be acting more like a common noun: it’s as if the adjective is being used to narrow down which of the avatars of the person is being considered. (A bewildered Elliot, as opposed to a contented Elliot; The Amazing Mr Fox, as opposed to The Humdrum Mr Fox.) Hence the use of the article.

And to add to Kelsey McLeod’s answer, the notion of decision, choice came first. The notion of surreptitiousness comes later: it’s using your capability of making good decisions, in order not to divulge that much, considering the social factors at play. It’s being discerning (which is in fact the same verb).

From OED, it all happened in Late Latin:

The first really obvious example I see in the OED of “choosing not to speak” and not just “being thoughtful in what you speak” is:

See Punctuation on Wikipedia. David Crystal has a lovely book out on the history of punctuation: Making a Point.

As Adam Mathias Bittlingmayer indicated, there were anticipations of punctuation for a while; the notion of systematically indicating pauses (period, comma) was a Hellenistic Greek invention, which became systematic in the late Empire.

Punctuation as we know it is a mediaeval Latin thing, and it kept evolving up until after the invention of printing; parentheses for example are a 16th century thing. The question mark is 8th century; quote marks as we know them (as opposed to quote marks the way email does them) is 12th century.

But the main written language of Western Europe was Latin up until at least the 16th century, and that’s the language for which most punctuation we are familiar with was introduced

Wiktionary is your friend:

We can’t rule out that they’re related somehow; and copper and limestone are both, um, minerals. But… probably not.

Where are the Seleucid Greeks?

One can only presume, they assimilated. The ruling class would have been Greek for a fair while; royalty certainly was. But there’s no reason to think the majority of Greeks didn’t intermarry. Not that we’d know much about it, because the contemporaries didn’t pay that much attention to ethnic difference. Lucian of Samosata is quite happy to tell us he’s “Assyrian”, and wrote a book on the religious history of Syria; but everything he wrote was firmly enmeshed in Greek literary culture.

What did they leave behind? The architecture of places like Palmyra. The tradition of human-looking statues in India, including statues of the Buddha. A Greco-Bactrian letter in Unicode: Sho (letter). Awe of Greek learning, inherited by the Arabs. Lucian himself. The koine of the New Testament (although the vehicle of Eastern Orthodoxy was Syriac, not Greek). And lots of stories about Alexander, including those involving Dhul-Qarnayn. 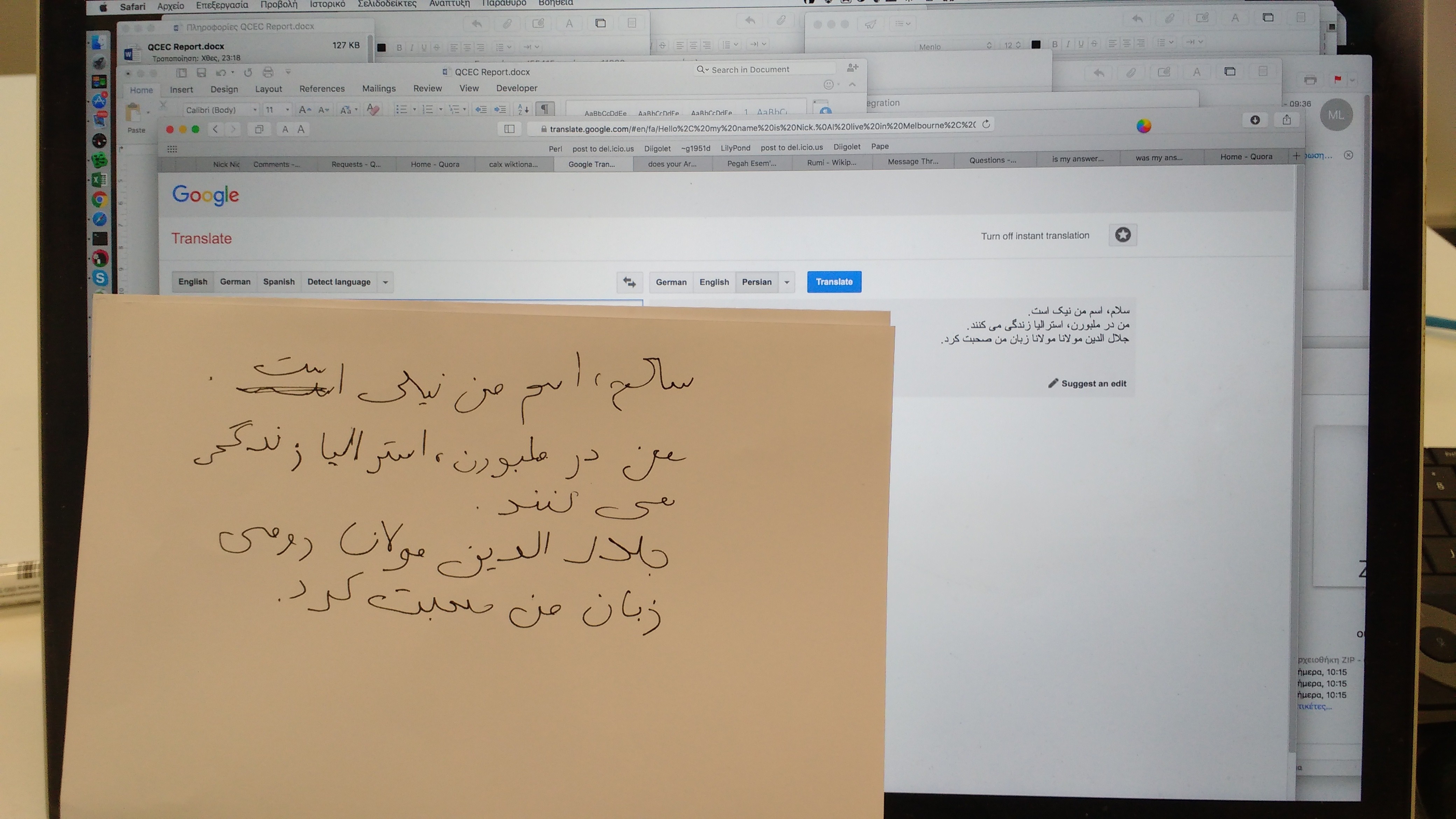 Inspired by Pegah Esmaili’s answer to What does your Greek handwriting look like?

All the answers posted are very good, and a more substantial contribution than I will make. I agree that in all likelihood, by the time the Seljuks came to town, the indigenous Anatolian languages were long gone, and it was all about the retreat of Greek and Armenian. But I was A2A’d.

So I’ll talk about Greek.

What do I know? I’ll draw on the survey in Modern Greek in Asia Minor; a study of the dialects of Siĺli, Cappadocia and Phárasa, with grammar, texts, translations and glossary : Dawkins, R. M. (Richard McGillivray), 1871-1955.

Greek was vibrant in the Pontus; retreating in Cappadocia (and anecdotally the other remaining old settlements as well, with the possible exception of Livisi); and wiped out everywhere else in Anatolia though Turkification; the substantial Greek-speaking population in Western Asia Minor was the result of later resettlement.

I’m pretty sure this map from Wikipedia (File:Anatolian Greek dialects.png) is overstated for both Cappadocian and Mainstream Greek, but it’s a start: 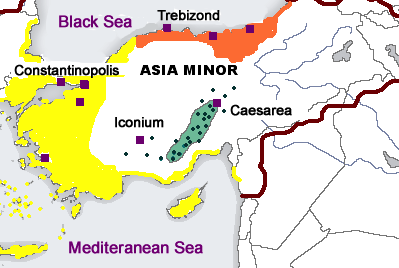 Motivated by discussion with Dimitra Triantafyllidou at Nick Nicholas’ answer to What are major languages which declined/extinct during Turkification of Anatolia?

Citing from discussion there:

The received wisdom, from:

is that the bulk of Asia Minor was islamised and turkicised relatively quickly after the movement of the Turks into the region.

It seems that the substantial Greek populations in the Western Asia Minor coast date from Ottoman times, with Greeks settling the coast from the nearby islands. The dialects of the coast are certainly close to those of the Aegean islands. Dawkins concurs, speaking of both settlement from the islands, and a wave of migration out of Greece in the 18th century.

We know that Bithynia was resettled by both Greeks (from Epirus) and Bulgarians in the 1500s–1600s. In fact, there was even a Tsakonian colony on the mouth of the Gönen river, which probably dates from the 1700s.

At about the time of this war Hellestheaeus, the king of the Aethiopians, who was a Christian and a most devoted adherent of this faith, discovered that a number of the Homeritae on the opposite mainland were oppressing the Christians there outrageously; many of these rascals were Jews, and many of them held in reverence the old faith which men of the present day call Hellenic. He therefore collected a fleet of ships and an army and came against them, and he conquered them in battle and slew both the king and many of the Homeritae. He then set up in his stead a Christian king, a Homerite by birth, by name Esimiphaeus, and, after ordaining that he should pay a tribute to the Aethiopians every year, he returned to his home.

Hellestheaeus was Kaleb of Axum, king of Axum (northern Ethiopia) in 520.

The Homeritae are the Himyarite kingdom, around Yemen, which fell to Axum in 525.

The Himyarite kings adopted Judaism around 380, probably for reasons of political neutrality. Per Wikipedia,

From the 380s, temples were abandoned and dedications to the old gods ceased, replaced by references to Rahmanan, “the Lord of Heaven” or “Lord of Heaven and Earth”

During this period, references to pagan gods disappeared from royal inscriptions and texts on public buildings, and were replaced by references to a single deity. Inscriptions in the Sabean language, and sometimes Hebrew, called this deity Rahman (the Merciful), “Lord of the Heavens and Earth,” the “God of Israel” and “Lord of the Jews.” Prayers invoking Rahman’s blessings on the “people of Israel” often ended with the Hebrew words shalom and amen.

Now, Procopius is claiming that paganism continued in Himyar, despite Judaism being the state religion. Paganism certainly wasn’t extinguished immediately. In telling of the early Jewish king Abu-Kariba (390–420), Wikipedia recounts:

Initially, there was great resistance, but after an ordeal had justified the king’s demand and confirmed the truth of the Jewish faith, many Himyarites embraced Judaism.

After Abu-Kariba’s demise (420), a pagan named Dhū-Shanatir seized the throne.

I know nothing of the history of the Himyarites, or of Yemeni archaeology. Yet, even if paganism was no longer the official religion, I see no problem with some Himyarites continuing to be pagan.