In The 1000 answer club, I noted that Michael Masiello, Dimitra Triantafyllidou and myself had around 940 posts, and I put up a challenge on who was to reach 1000 first.

In PM, Dimitra bowed out of the challenge, because she has a life, but she said she was happy to act as cheerleader. Only no short skirts.

I was up to 999 last night. I noted this morning Michael’s 1000th post with contentment: Michael Masiello’s answer to If I were to arrange a date at a bookstore, which book would you choose? If I took you to a bookstore and instead of splitting the bill we bought a book for each other or for ourselves, which genre or specific book would you choose?

No Callimachus for you, Magister, but have this instead: 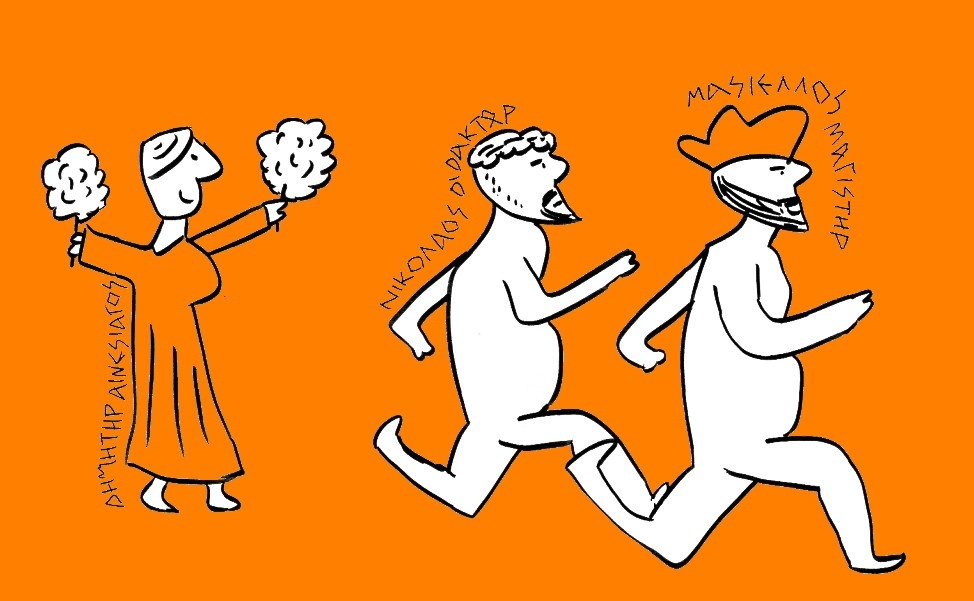 Yes, I know very well that the Latin word magister was borrowed into Byzantine Greek as maïstōr. But this is an Ancient vase, you see.

And no, I never have seen Michael in a beret. (Yes, that’s what it’s supposed to be.) But come on. What other headgear would you picture on him?

Beret: The beret is part of the long-standing stereotype of the intellectual, film director, artist, “hipster”, poet, bohemain and beatnik.

Γύλιππος (Gýllipos) in Gerhard Köbler’s site is all I get, and all it says is “origin unclear”.

It does indeed look like a compound of gyl– and hippos “horse”. There is no gyl– word in attested Greek. There are the diminutives gyl-arion and gyl-iskos referring to kinds of fish; and there is the noun gylios, referring to a long-shaped satchel (Aristophanes), or to a hedgehog. Aristophanes also has the word gyliauchēn “gylios-necked”, meaning “long-necked, scraggy-necked”. gyliippos > gylippos could possibly be a “gylios-necked horse”, or someone associated with them.

The answer I think I love the most is the one where the rambling anecdote was the point of the question.

Nick Nicholas’ answer to How can one summarize the Watergate scandal to a kid?

I haven’t done a cartoon version of this. Yet. It would be a glorious think if I did; I’ve already practiced the Nixon ski-slope nose on a stick figure.