Outside of the currently supported languages (English, Spanish, French in Beta):

If you ask D’Angelo, German and Italian: they’re next up in the plan. Launching a beta for Quora en français by Adam D’Angelo on The Quora Blog.

If you ask Clarissa Lohr: https://www.quora.com/What-are-t…

I think I would have chosen Hindi, Tamil and Russian next. Maybe Arabic.

So. Let’s approach this a little more coldly.

So its choices of languages have to be strategic.

What language choices are strategic?

My own more considered opinion: definitely Russian, as the monopoly of VK (social network) in Russia shows, and probably Arabic. There’s Benjamins to be had there. Unless…

I have no idea whether VCs in the Valley are so impractical as to let their cultural and political predilections outweigh their nose for money. But you gotta admit. If they are, that would explain French, German and Italian. Which I, as a cultural European, am fricking STOKED to see announced; but which I don’t think are where the benjamins are at.

As of this writing, Quora supports English, Spanish, a beta for French has been announced, and there are plans for German and Italian.

This was answered by Laura Hale with the data available to her in 2015:

Laura Hale’s answer to Does Quora have any black employees? I read that tech firms in Silicon Valley face challenges in recruiting and retaining minority employees. 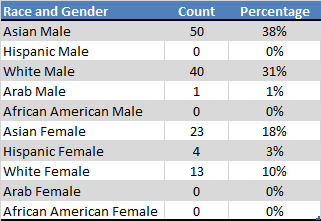 From what I can tell, the answer appears to be zero African American employees, while Asian employees represent 55% of Quora’s employees. This is an ethnically diverse group though, and includes people of Chinese, Iranian and Indian descent among others.

The reaction of Quorans to the question even being posed is… enlightening:

Adam Nyhan’s answer to Does Quora have any black employees? I read that tech firms in Silicon Valley face challenges in recruiting and retaining minority employees.