My translation (and you can tell):

Question: How does the Quora Question Translator work?

Question Details: How are the questions to be translated chosen? What is the level of supervision over this bot by the site owners? What is its anticipated level of activity?

We select questions internally according to a series of search filters. For example, we observe the popularity of questions asked on English Quora, and work out which could be successful or provoke interest among French-speaking users.

The questions are then submitted to a machine translation platform to be adapted into French. The translated questions may be revised if we decide that the adapted version can be improved.

Day by day, we improve French Quora to give you a version of the site most faithful to the English and Spanish versions, while bearing in mind that each audience is unique to each language, and that the site should be subject to its own cultural specifics.

Vote #1 Jay Wacker: Jay Wacker’s answer to What exactly is Wikidata and what is its relationship to Quora topics and questions?

To break down what Jay said just a bit further:

An ontology is an organisation of concepts in the world. Quora’s existing hierarchy of topics is one, contributed to by Quora askers, Quora topic gnomes, and whatever the initial seeding of it was within Quora.

Wikidata’s ontology is a rather bigger ontology. It has been contributed to by Wikipedia editors, in all the various language versions, and many other online projects.

In addition to the benefits Jay has mentioned: the Wikidata ontology has more information about its topics than the Quora one does. In particular, it has more explicit links between subtopics and their parent topics; more identification of topics as people; more identifications of topics as places, and the geographical coordinates of those places. (As well as all the information contained within the related Wikipedia articles; and the infoboxes in Wikipedia are all machine-readable by design.)

By matching Quora topics to Wikidata topics, Quora can work out parent/child topic links, which are pretty crucial to how topics are used. (You have to explicitly tell Quora that sociolinguistics is a subtopic of linguistics, and if you don’t, people subscribing to linguistics will not receive new sociolinguistics questions. Multiply that by every new topic ever.) Quora can produce maps of location topics, and work out which places are close to each other, which can also help the related topic suggester. Quora can narrow down which topics are (famous?) people. Quora can work out which topics are bona fide ambiguous, where it hasn’t already.

Well, not as spectacular a story as some. Just answers. 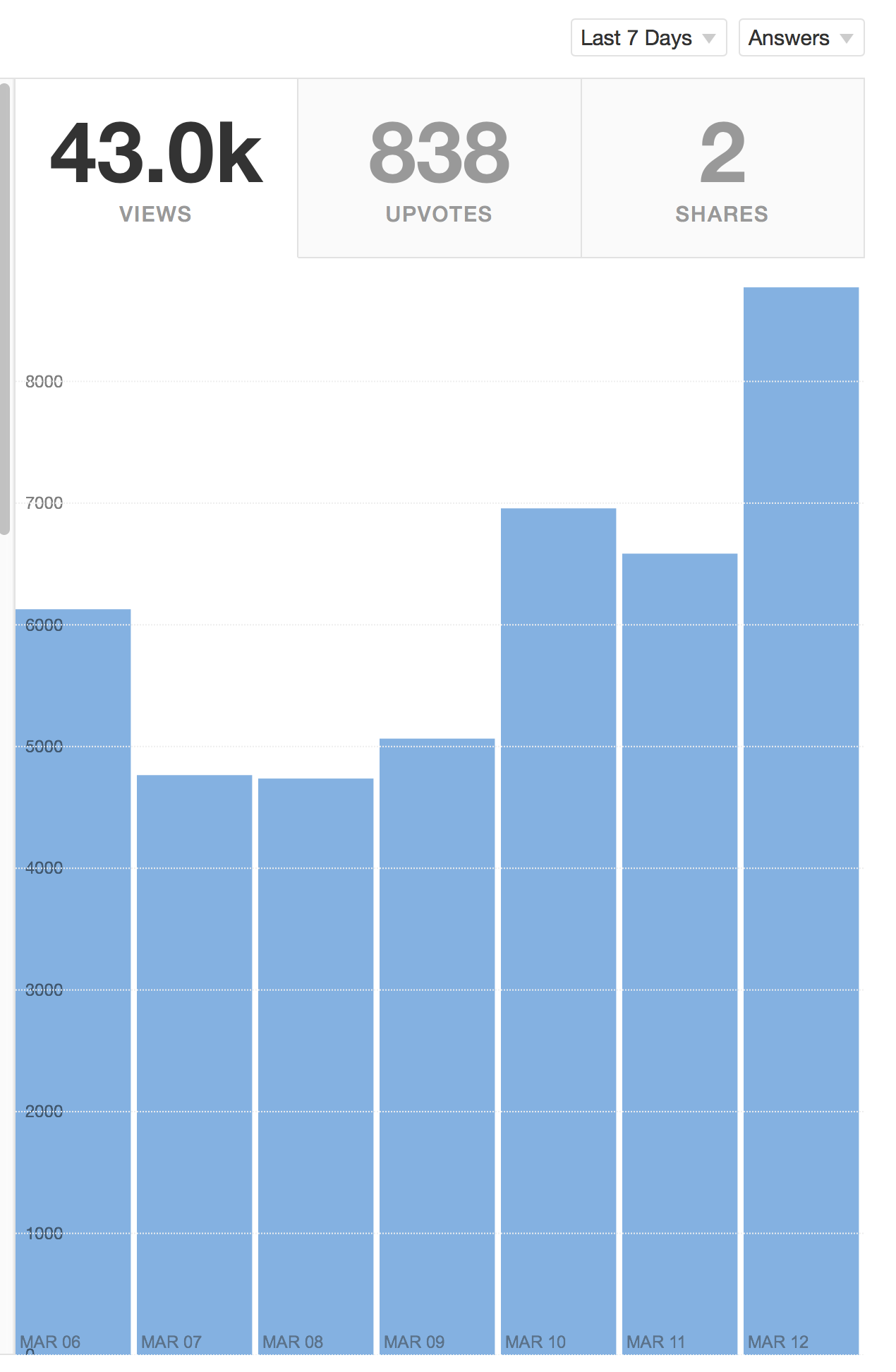 5k is on the low end, so maybe less traffic than usual. I have been busy with freelance work this past couple of weeks, so I have been writing somewhat less than my usual deluge of stuff. Spike yesterday is from the inexplicably popular Nick Nicholas’ answer to What are some cultural faux pas in Australia? 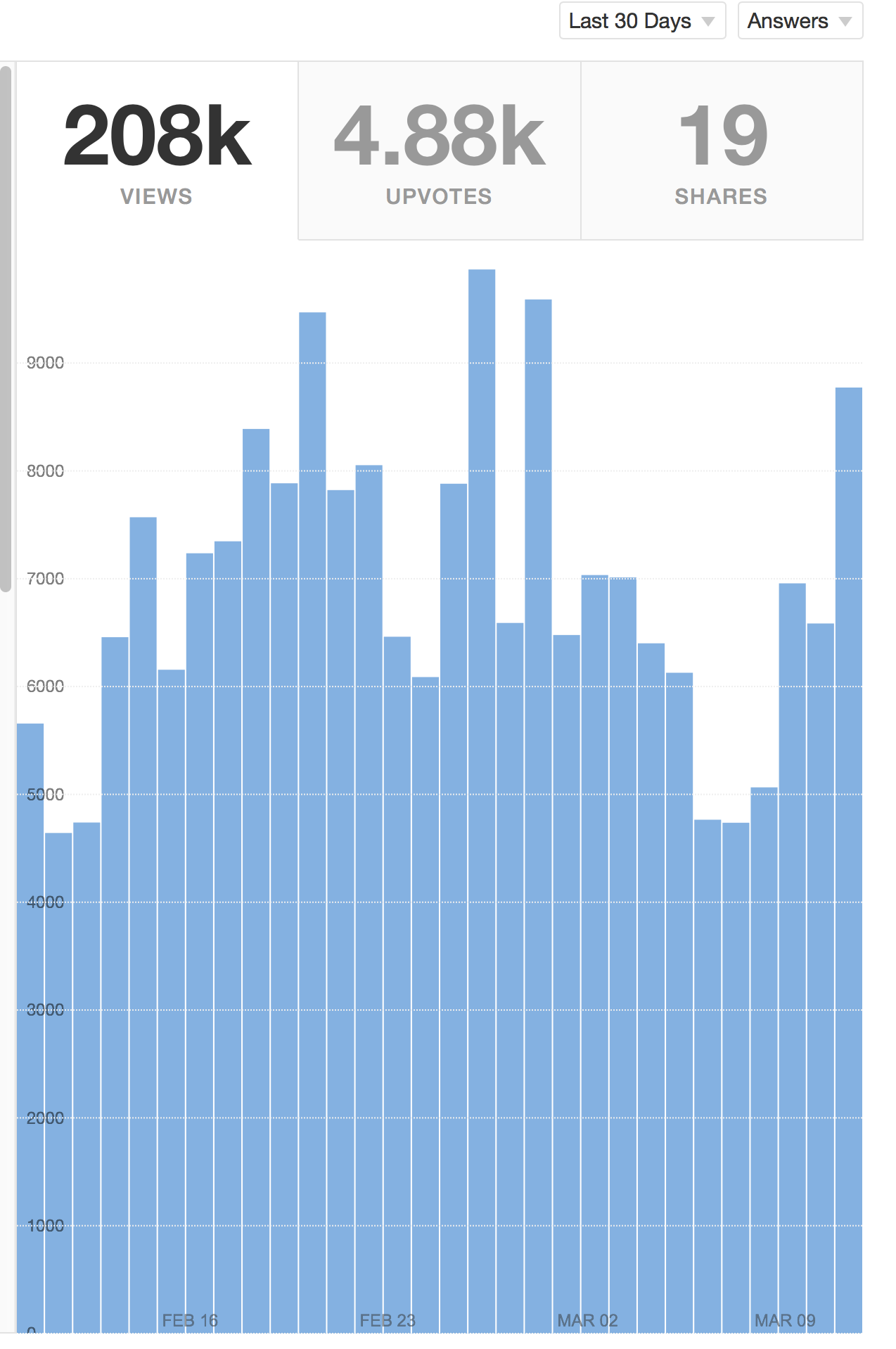 That’s more like it: it varies between 5k and 10k these days. Some spikes, but actually no one overwhelming answer. 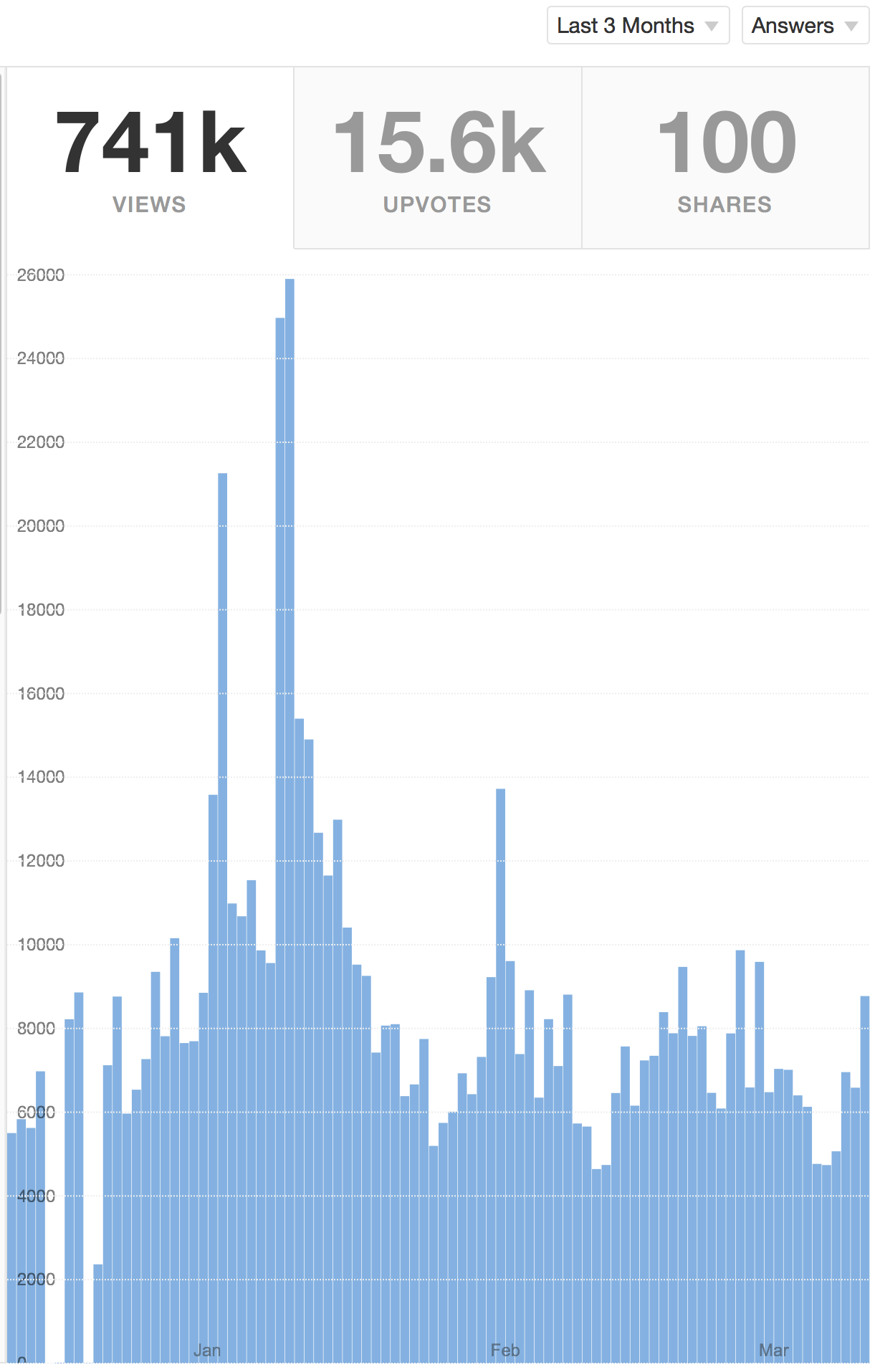 The gaps at the start are of course the days the stats died (The Statistics Black Hole by Nick Nicholas on The Memes of Production). The peaks are my most viral answer to date, and not an answer I take any warm fuzzies in: Nick Nicholas’ answer to Which Indian states are well known in other countries?