Digenes Akritas was a hero of mediaeval Acritic songs, ballads celebrating the deeds of border guards of the Byzantine Empire. The hero survived into Modern Greek folk song, and The Death of Digenis is a song that got a lot of renown.

I cited its depiction of the Grim Reaper at https://necrologue.quora.com/Som… , since I’ve come to be regarded as a Grim Reaper of Quora on Necrologue. If I’m to start rendering the folk song in blank verse, well, I might as well see it through.

The hero Digenes “Two-Race” was so called because his father was an Arab and his mother Greek. The name got alchemised into Twyborn by Patrick White, in The Twyborn Affair—White having heard of Digenes from his Greek boyfriend. Twyborn fits English metre better.

Tuesday was Twyborn born; he dies on Tuesday.
He bids his friends and all the brave come gather,
Menna, Black Ali, and the Ogre’s Son,
and Trembling-Lip, whom world and earth both fear.
They went and found him lying in a field.
He moans—the mountains quake. He moans—fields quake.
“What is it, Twyborn, makes you wish to die?”

“Friends, you are welcome, friends and dear to me;
sit down, be quiet. Let me tell my tale.
Mountains of Araby, and Syrian valleys,
where two men dare not march, three dare not talk,
but fifty, a hundred men tread fearfully:
I’ve passed through them alone, on foot and armed,
my sword four cubits long, my lance three fathoms.
I’ve trod through hills and fields, through fields and summits,
on moonless nights, on nights without the stars.
And living all these years above the ground,
I’ve felt no fear for any of the brave.
I see now a barefoot man, with shining clothes;
his blazon from the lynx; his eyes are lightning.
He bids us fight on marble threshing floors:
whoever wins will take the other’s soul.”

Nick Nicholas’ answer to What will kill Quora?

Of course, as Bill Husted said (Bill Husted’s answer to Will Quora someday come to an end? ), all things end, and of course, it won’t be because questions are a finite resource: Are the number of questions that can be asked on Quora finite?

There are things that will kill Quora, and D’Angelo is not the source I’d seek any assurance from, about the future of Quora. I mean, come on. The guy’s a Silicon Valley CEO. What else is he gonna tell you?

No, it’s not the dumb questions.

No, it’s not the trolls.

No, it’s not the smugness.

No, it’s not the moderation.

No, it’s not the UX randomness.

If Quora is the second incarnation of Gutenberg, remember that Gutenberg lost his printing press in a lawsuit, and he made his money from printing indulgences.

Monetisation. That’s what will make Quora live or die. The venture capital vat of money is running out. You’d better hope Quora has a good marketing arm to deal with ads.

One of the characteristic features of Anglo-Latin is that the diphthongs æ and œ merged with e. This is fully represented in the American spelling of Latin loanwords, though the simplified spelling is not consistently applied:

In particular, names were not respelled. So Cæsar was pronouned in Anglo-Latin Cesar—even if it wasn’t spelled Cesar.

When the Great English Vowel shift came to town, the long e ended up changing pronunciation to /iː/, just as it did in English proper. So Classical Latin kajsar > cajsar > tʃajzar > sajzar > Middle Anglo-Latin seːzar > Modern Anglo-Latin siːzar.

Vote #1 User: User’s answer to What would a map of Quora look like?.

This is my own poor attempt. 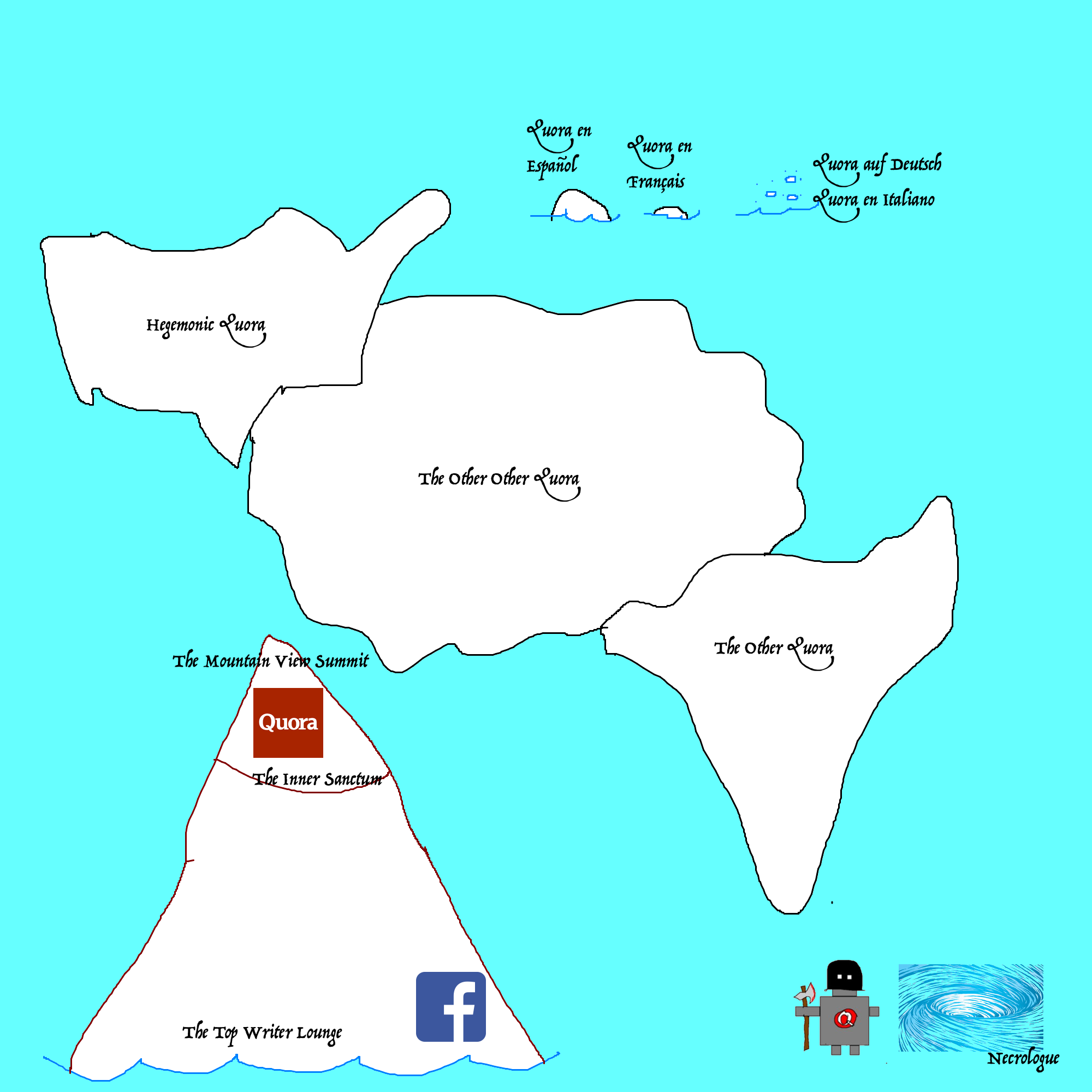 The rest, I trust, are self-explanatory.

Odd you’d ask me, Habib le toubib! Russian actually is a language I wish I understood.

As I harrumphed in Nick Nicholas’ answer to What is the etymology of the word “egotism”?:

There is a recherché distinction that some people have made between egotism and egoism in English: egotism is a bad thing, egoism isn’t. But that distinction is pretty much made up, and noone really bothers with it any more.

Quora’s strong preference is for people to use Quora’s blockquote formatting. This plagiarism policy applies to people’s own answers on Quora and repeatedly posting the same answer on Quora without blockquotes and attribution is against policy on all answers after April 12, 2016.

Quora doesn’t have a specific policy about Barnum effect (i.e. statements that vacuously apply to anybody); Barnum statements by themselves are not against policy, and would merely fall into the morass of poor answers.

Self-plagiarism is enforced robotically on Quora, and is not uncontroversial: Is Quora’s policy regarding self-plagiarism reasonable?

The myth that cats have multiple lives exists in many cultures around the world. It’s not always nine lives, though. Some Spanish-speaking regions believe cats have seven lives, while Turkish and Arabic legends claim cats have six lives.