What is your favourite Greek font, and why?

There is a Romantic history to Greek typography. The first fifty years of printing started inauspiciously, with poor, crude carved out Greek letters. But they got steadily better, until their apogee in the Complutensian Polyglot Bible of the 1520s, where they are used in the New Testament.

The Old Testament of the Computensian is written in the version of Greek typography that then prevailed for the next two centuries: the italic squiggle, popularised by Aldus Manutius, and taken up because it was more reminiscent of what scribes were doing.

Greek typography only got out of squiggle in the late 18th century, and in the early 20th century typographers were coming to fetishise what could have been, if the early tradition had continued on. Classicists may be familiar with the more modern iteration of fonts inspired by the old style: GreekKeys Athenian/New Athena Unicode.

The Greek Font Society has revived a font based on the Complutensian, although it’s now polytonic rather than monotonic. It’s not a font you’ll get away with for everyday use—people won’t get past the archaisms, like the nu that looks like a mu, or the random lowercase letters that look like capitals.

But there is a fearsome symmetry to the font, a stern blockiness, that I adore. Enough to have featured it in my wedding order of service: 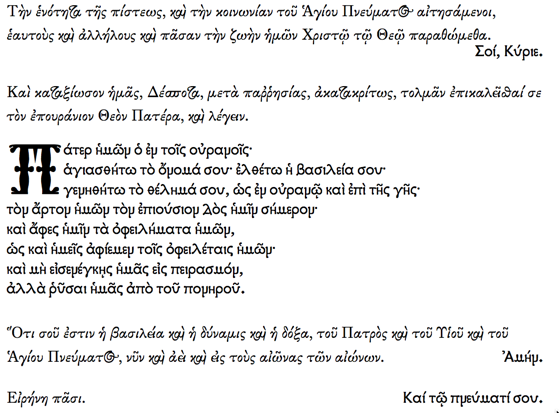 Some would say I got married just so I could show off my favourite fonts. But that would be a bit much even for me…

Havergal Brian’s Symphony No. 1 “The Gothic”.

I first heard of Brian from the Guinness Book of Records, back before it became a picture book. My curiosity was reawakened this past year through some random link taking me to the Havergal Brian Society’s pages. His life story is cool; his early work sounds like Mahler on steroids—as do the criticisms of his early work; his late stuff sounds enigmatic, but still full of awesome marches.

I borrowed everything on him I could find from the Melbourne Uni Music library. Biographies, analyses, appreciations. And I sat down to listen to the Gothic on Youtube. Several times.

But I have to agree with most critics. It’s just too incoherent to love or even get into. And the whole “it ends anticlimactically, on purpose” thing, which people trot out as a defence, works for Mahler’s 5th, and it may (if you’re being charitable) even work for Mahler’s 7th (a damn good symphony, but I don’t buy the finale either).

But in this case, sometimes a cigar really is just a cigar.

I think what you mean, OP, is: are Graeco-Latin stems the only stems from which compound words can be formed in English.

The answer is of course no: there are plenty of compounds in English based on indigenous Germanic words, and there were all the way back to Old English. Statecraft. Breastfeed. Windmill.

There was a preponderance of Graeco-Latin stems for scholarly and learnèd compounds through the Renaissance, and up until the last couple of generations. Not any more: Bubblesort. Backbeat. Widescreen.

And you really don’t want to see how Greek renders object-oriented as a single compound.

Ok, you do: αντικειμενοστραφής. “object-turning”, where object itself is “opposite-lying”. Daft, just daft, and not idiomatic. HY-252 “Αντικειμενοστραφής Προγραμματισμός” (Crete Uni, CS-252) shows what could have been: the OOP course is subtitled οντοκεντρικός “entity-centered”, which is, well, at least less daft.