A question considered in We are Anonymous and we ask the questions on Quora: So how many questions are asked by anon users? by Laura Hale on quora numbers

The theory I came up with in reaction:

It makes sense that dens of argument like Atheism/Theism would have a high proportion of anon; but the relatively large number in uncontroversial topics like Chemistry is an ongoing source of befuddlement to me.

Actually, it isn’t: 38%. That’s not people fearful of retaliation. That’s people opting out of RealName. it’s a surrogate for the pseudonymy that Quora bans.

38%. … Wow. That’s really a cultural effect, and not just a contingent response. That points to people asking anonymously all the time.

Anon fails to deliver by Nick Nicholas on Gallery of Awesomery

I have already posted an answer to this at I love youse guys by Nick Nicholas on Opɯdʒɯlɯklɑr In Exile.

However, this raised a different question in my mind, one identified by Laura Hale. The Two Quoras: the Indian quora and the US quora, with rare intersect.

So, to illustrate that given this data, I’ve sketched a graph of the friendship network to date here. And I’ve done a simplifying assumption: Blue for Indian-sounding names, Yellow for Muslim-sounding names (that’s to account for Muslim Indians and Pakistanis), and Green for others. Pegah Esmaili and Aziz Dida, I’ve put you down as Muslim-sounding, because I didn’t know what else to do. Heavy outline are respondants.

Not a lot of US figures here, but my Euro network has been impinged on. The bridges for this network, appropriately enough, are in the middle. Introducing Yellow is complicating things, but it looks like: Pegah Esmaili, Ajas Mohamed, Beth Briony, Piyush Michael, Lyonel Perabo. 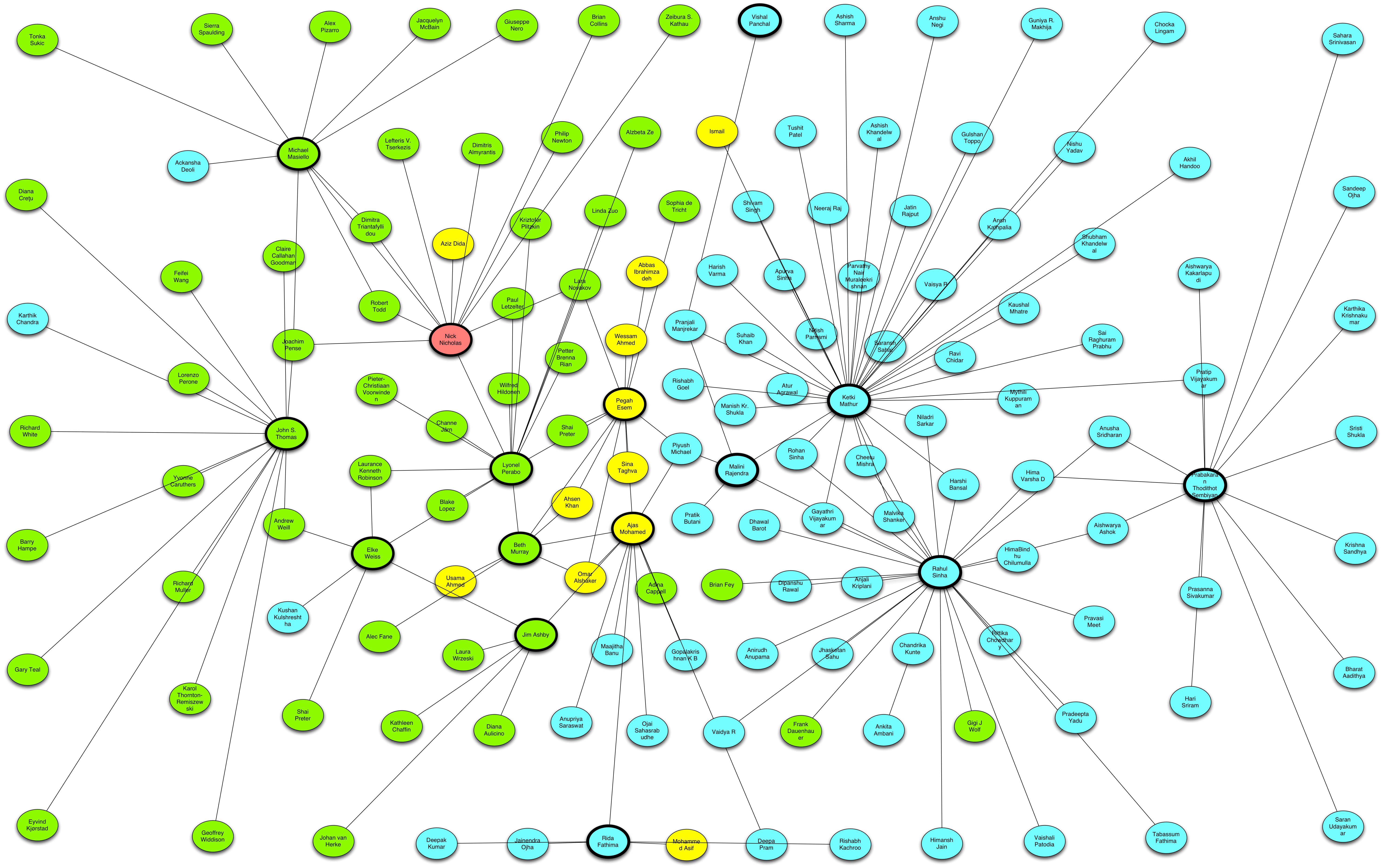 For Modern Greek, it depends on your favour of Greeklish:

Not many countries now. If you dig into other questions, such as the perennial favourite What do the Balkan nations think of each other? What are the stereotypes? or What do Albanians think of Greeks?, you’ll see there’s some animus in (FYRO) Macedonia and Albania, and a lot less than there used to be in Turkey and Bulgaria.

Historically, the Romanians would have hated us because of the Phanariotes. But that’s a long time ago now.

When Greeks were new immigrants in the diaspora, they were bottom of the rung, and subject to the usual fear and loathing, especially when they came as young men without families, and thence were associated with crime. That’s Australia in the 1920s, or the US before then. (The main immigration wave to Australia was 1950s-70s, but it was not as predominantly male.) Again, ancient history.

I will not answer for Cyrillic, though the answer is yes.

I will cite from Nick Nicholas’ answer to Why is it possible for the Cyrillic script to be adopted in so many languages?

What made Greek script suited?

So in theory: sure, just as Latin was suited: just add diacritics and digraphs. In practice: that would mean real work, and at best you’d have to kiss off legibility from Greeks as a design criterion:

Cf. the use of Greek to write Turkish: Nick Nicholas’ answer to How has it happened and Kemal Ataturk did not adopt Greek Alphabet, although in the Ottoman empire the Greek (and Cyrillic) were spoken?, and the Soviet Pontic use of digraphs: Pontic Greek