No explanation offered in the original paper On Hortalotarsus skirtopodus, a new saurischian fossil from Barkly East, Cape Colony, though the author does indicate it was all about the distinctive Tarsus (skeleton) (back of the foot).

Nothing in Massospondylus, the accepted family name for the dinosaur.

The Spanish Wikipedia on Hortalotarsus offers “tarsus of a young bird”. Ancient Greek had a word ortalis (no h) meaning “fowl”, and its diminutive ortalichos meant “chick, young bird”.

Which means that if “tarsus of a young bird” was what Seeley was going for, it should have been ortalichotarsus.

This came out of an exchange I had with Kelvin Zifla, over at Nick Nicholas’ answer to Why do I experience a profound feeling when I read and understand old writings of my mother language?

It involves correcting Wikipedia, though I’m not bothering to just yet.

There are three definite oldest attested texts in Albanian.

Arnold von Harff included in his vocabulary a few variants of “Lady, may I sleep with you”, which makes him one of the first pickup artists of the Balkans. Oddly enough (or, as Kelvin puts it, not so oddly), he did not try any lines out in Durrës.

Having looked at Die Pilgerfahrt des Ritters Arnold von Harff von Cöln durch Italien, Syrien, Aegypten, Arabien, Aethiopien, Nubien, Palästina, die Türkei, Frankreich und Spanien, which includes his Greek Berlitz phrasebook, I was moved to depict his travels in comic strip (in Greek). The results of which are available at A comic strip on Arnold von Harff by Nick Nicholas on Gallery of Awesomery. I daresay it’s worth learning Greek for! 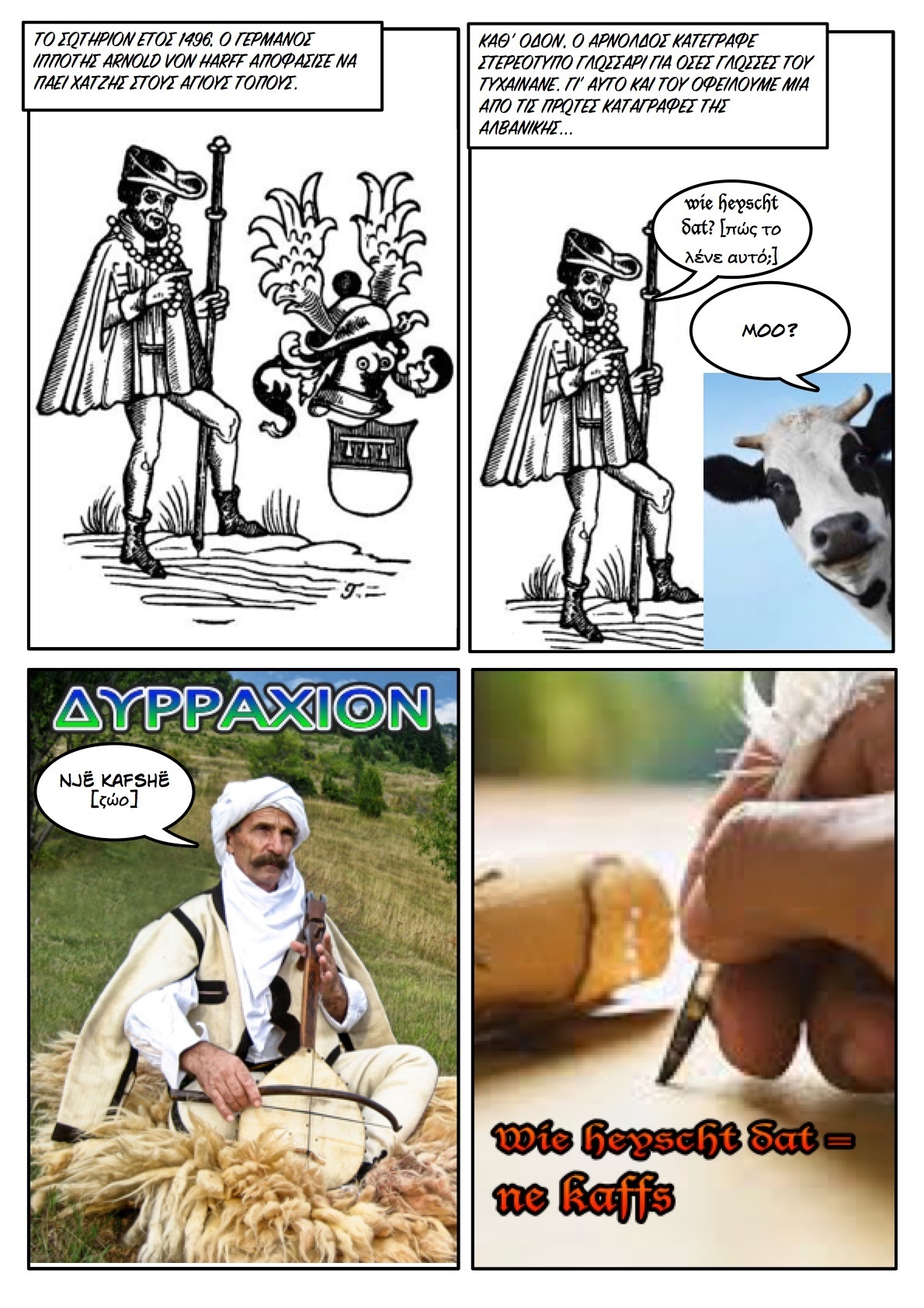 1. Joachim Matzinger in 2011 was finishing up a project at the Austrian Academy of Sciences, on early attestations of the Albanian verb, under the supervision of Stefan Schumacher. They were doing press, as one does when you wrap up a project. This is one example: Austrian Scholars Leave Albania Lost for Words.

Professors Stefan Schumacher and Joachim Matzinger from the Academy of the Austrian Studies have managed to discover a document which is thought to belong to the 14th century, in which Latin letters are used for the Albanian.

Oddly enough, no evidence of that on Matzinger’s CV.

So, this is what happens when journalists encounter medical science: 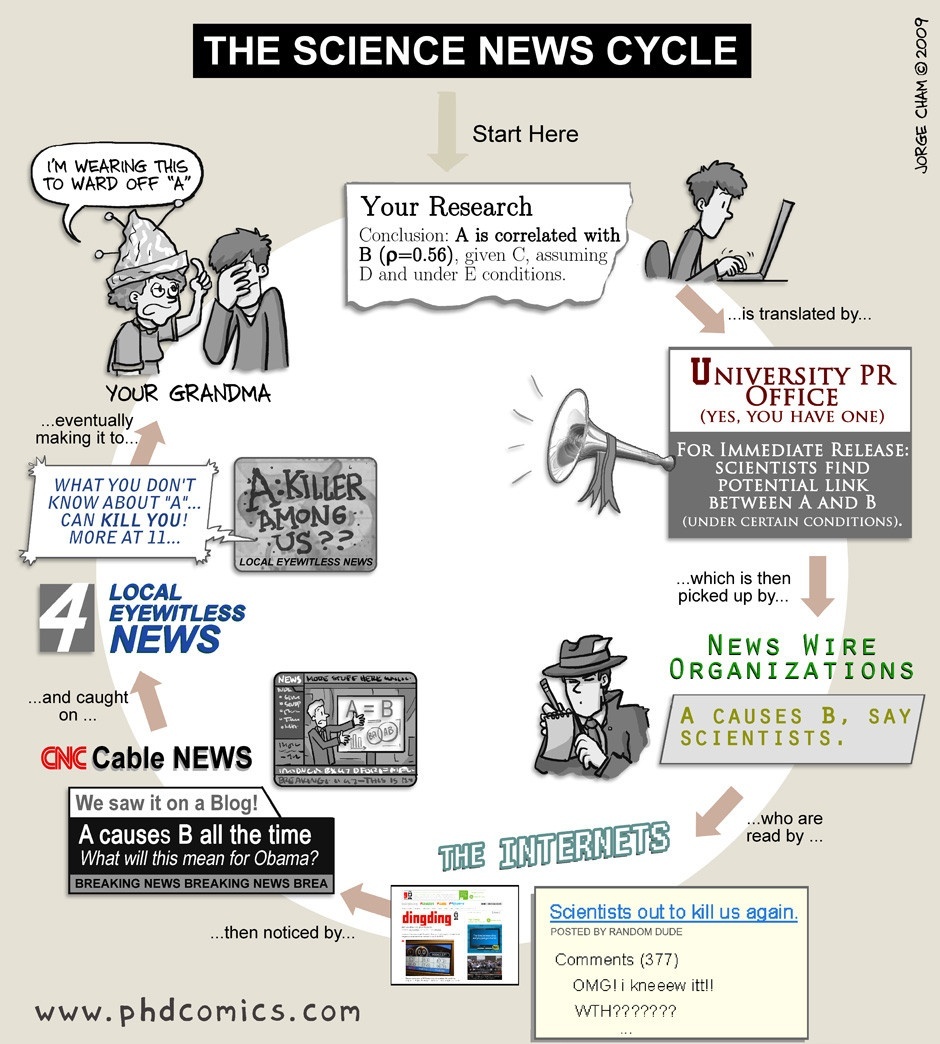 Well, what do you think when linguistic research collides with the Albanian press?

The world is a smaller place than it used to be. I got in touch with Dr Matzinger. You guessed it: he never said any such thing:

First of all, no, we did not discover any Old Albanian document! For years there’s this rumor created by some Albanian journalist who totally misunderstood and misinterpreted what we said many years ago in an interview at the very beginning of our project. Unfortunately, this “news” pops up periodically, cuz the internet doesn’t forget! Anyway, it’s a hoax and be sure if I’ll ever discover some hitherto unknown Old Albanian document I’ll spill my beans at this instant……!

2. The curious case of the Bellifortis manuscript. A German treatise on military technology, written in 1402–05. The treatise has a fair bit of astrology in it.

As Wikipedia reports, Todericiu and Polena in 1967 identified some gibberish on the last page of the manuscript interspersed in a Latin poem, as Albanian. Robert Elsie, one of the main Albanologists in the West, wrote a paper on their claimed Albanian: http://www.elsie.de/pdf/articles…. His take is less negative than Wikipedia makes it seem—the manuscript is said to have belonged to Scanderbeg, and he thinks the gibberish is at least inspired by Albanian.

Myself, I’m not convinced. I will admit that the Latin poem is pretty out there and obscure, as you’d expect of magic. But the claimed Albanian is not just obscure, it’s loopy; and it reminds of nothing so much as the claimed attempts to interpret the Phaistos Disk as Basque.

I mean, you tell me. This is some of the Latin:

This is the beauty of the twelve shining signs.
The virgin boy should be initiated on a sunny day in the
first hour in the morning, holding the round thing in the left hand
of (his) disharmonious body, but in the right hand may he take up a torch,
pronouncing twelve times that which is paraphrased.
After an interval, look for what is being sought after,
ascribed earlier. Present is the subtle thing which is being tried.
He who understands, knows it. A simple expression is sufficient.
And may the twelve heights of heaven, and also the virtues which
are contained in them, bind the prescribed things.

And this, supposedly, is the Albanian which follows it, as rendered by Todericiu and Polena:

They’re both gibberish, but they’re not the same order of gibberish.

Elsie thinks they’re on to something with:

Even though he agrees it’s gibberish. Dunno. I think if the words are small enough, and the interpretation strained enough, coincidence is guaranteed.

3. The winner, by a wide margin, is the claim by Musa Ahmeti that he discovered a manuscript in the Vatican Library dated 1210, by a Theodore of Shkodra. Per Wikipedia,

The work is a manuscript decorated with golden miniatures and colored initials, divided in three parts. Pages 1–97 deal with theology, 98–146 with philosophy, and pages 147–208 with a history of the known world from AD 153 to 1209. On the final page of the manuscript we find a note by the author “With the assistance and great love of the blessed Lord, I finished this in the year 1210 on the 9th day of March.”

Theodore of Shkodra is in fact mentioned in a book article by Robert Elsie: Albanian Literature.

The manuscript has not been seen since; all that Ahmeti has released is that colophon:

I’ll leave it to Albanologists to work out if that’s plausible Old Albanian. Dr Matzinger, at least, dismisses it as a “pure hoax”. And lay Albanians have given up waiting as well, to judge from the second article cited in Kritika-Diskutim.

I mean think about it. Noone has ever written Albanian before. Noone is promoting Albanian as a language of book-learning: there is no Alfred the Great or Dante Alighieri on record, saying we must write in Albanian, and no missionary program such as that which gave us Old Church Slavonic.

And out of nowhere, in the 13th century, we have a luxury manuscript in Albanian, with learned philosophy and theology, as well as an up to date world chronicle? Who would read it? Who would commission it? And why would it be forgotten again so quickly, and stashed away on a shelf in Rome?

We have, Xhevat Lloshi claimed in 1999, indications that someone was writing Albanian down in the 13th century:

The first attempts to write the albanian language are to found in the 12th – 13th centuries. It is understandable that the first documents may have been trade, economic, administrative and religious wrtitings compiled by low-rank clerics. A Dominican friar, Guillelmus Adae [Guillaume Adam], knows as Father Brocardus, noted in a pamphlet he published in 1332 that “the Albanians have a language quite other than the Latin, but they use the Latin letters in all their books”. [Cited from Formula e pagëzimit]

Guillaume Adam was bishop of Bar, Montenegro (Albanian: Tivar) at the time. Robert Elsie has cited that pamphlet (Elsie, Robert (2003). Early Albania: a reader of historical texts, 11th-17th centuries. Harrassowitz. pp. 28–30); it’s presumably the Directorium ad Passagium Faciendum per Phillippum regem Franciae in terram santam anno 1332. But what does he mean by books? Theodore of Shkodra? And how much of an Albanian literacy programme was going on?

Literally, molōn is the past (aorist) participle of blōskō, the non-Attic verb for “come, go”. In this case, “having come”, meaning “when you have come”.

labe is the imperative aorist of lambanō, meaning “take”.

So “having come, take!” literally. More idiomatically, “come and get them!”

All this, and more detail, available at https://en.wikipedia.org/wiki/Mo….

Not by design. I’m interested in the discussion, so I keep following it even if I have my answer. (The kinds of questions I ask don’t admit to open-and-shut objective answers anyway.)