So… what did I find when I was looking at the history of the Greek alphabets, in Jeffrey’s monograph?

The second problem is that not all the sibilants were present in all the dialects. Most Greek scripts initially avoided xi, and wrote /ks/ as ΧΣ; Jeffery (1990:32) suspects the Ionians held on to it because /ks/ in Ionic could be realised as [kʃ] (which is speculative), and under the influence of neighbouring non-Hellenic languages like Carian which did have /ʃ/. (Circumstantial evidence for this lies in the separate Ionic invention of sampi as yet another sibilant, after they’d skipped san.) Once the Milesian alphabet was adopted by Athens, xi was reintroduced to the rest of Greece as /ks/.

So: possibly, xi was an attempt to make use of a Phoenecian letter with a /ʃ/ pronunciation (actually samekh was the /ʃ/ pronunciation: the letters got mixed up). It stuck around in Ionic, maybe because they had a use for the sound; and then accidentally came back into the standardised Milesian alphabet, which was Ionian.

That does not explain psi, which was not necessarily Phoenecian to begin with. As https://en.wikipedia.org/wiki/Ps… reminds me, it was /kʰ/ in Western Greek, and /ps/ in Eastern Greek. My suspicion: /kʰ/, which makes more sense for Greek, came first; and was reinterpreted in Eastern Greek as a counterpart to xi, since Eastern Greek already had a chi.

I don’t have a basis for that; but whatever happened, xi, as the definite Phoenecian letter, came first, and psi followed.

History of the Greek alphabet

The unusual use of special letters for the consonant clusters [kʰs] and [pʰs] can be explained by the fact that these were the only combinations allowed at the end of a syllable. With this convention, all Greek syllables could be written with at most one final consonant letter.

A referendum that is of epochal consequence for a polity needs to be decisive, in order to settle the issue, instead of converting the referendum to a neverendum. Which is why referendums to change constitutions (for those countries that have them) don’t have a 50% threshold; and why federal polities require enhanced majorities of states as well as votes. And given how disruptive the consequences are, the dice do indeed need to be loaded against change, whoever is advocating it.

That’s not Athenian democracy, but neither is anything else in Britain or the West. That is a reasonable check and balance on a popular vote, in favour of stability.

OP, asked because I’ve just seen one here in Australia, and you really don’t see that kind of thing often: 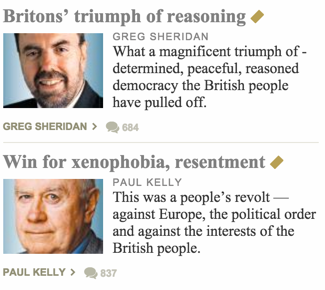 Greg Sheridan and Paul Kelly (journalist) are both pretty Tory; if anything, Kelly is more Tory. But having the front page of a Murdoch paper go all Crossfire (TV series) is… odd. I don’t remember seeing its like before.

Subsidiary question: what is going on in the Oz? Main question: is this happening anywhere else?