Context: Dimitra Triantafyllidou’s answer to How does one cook lokma?

I was bantering with Dimitra on the Melbourne nouveau Lokma place, St Gerry’s. Named after the patron saint of Cephallonia, Gerasimus of the Jordan.

Which reminded me of the funniest joke I’ve heard in Greek, told by the late Gerasimos Arsenis, another Cephallonian. As recounted in Greek at Γιώργο, χάσαμε…

And here is the drawn version thereof: 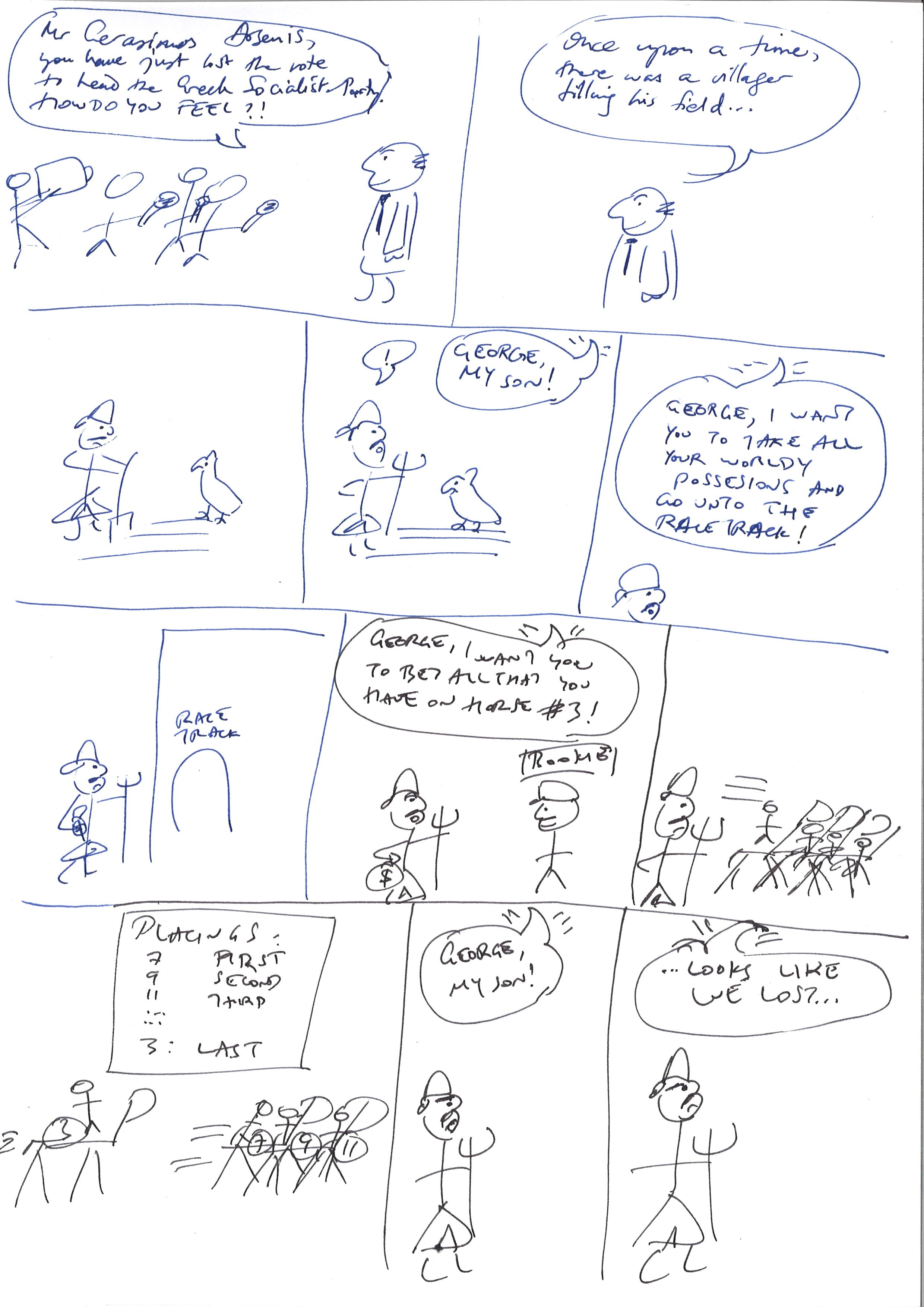 I normally pass on answering these readily Googleable questions, unless I can say something linguistically interesting about them. It’s your lucky day, Anon. 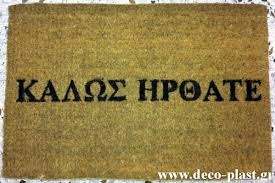 There are many such correspondences between Turkish and Greek, and it’s often quite hard to work out which came first.

The well word, καλώς, is in the archaic form, though that may well be genuine archaism and not Puristic—I’ve seen nothing in the earlier vernacular to suggest that καλά ήρθες was ever used. You will often see the more puristic verb forms, καλώς ήλθες and καλώς ήλθατε, kalos ilθes, kalos ilθate, particularly in more formal/written contexts. 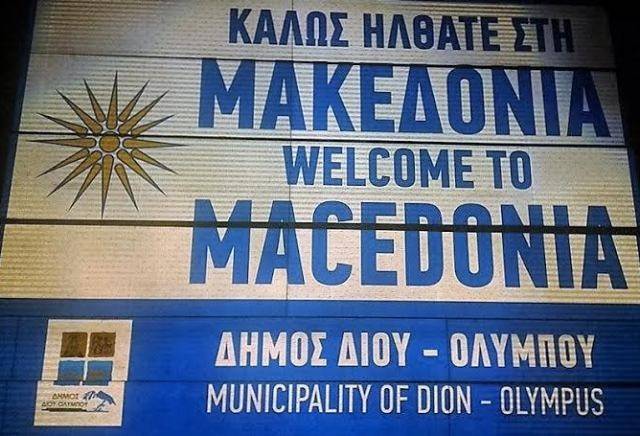 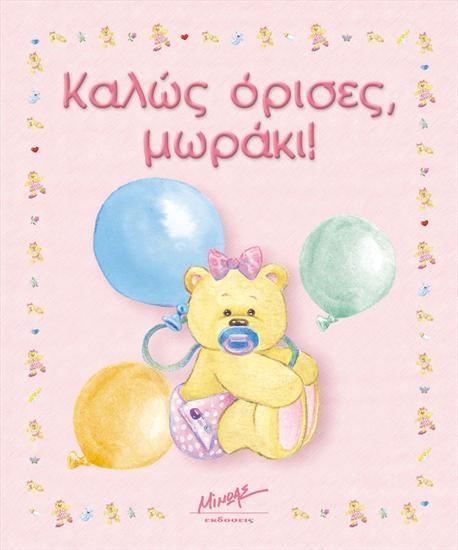 Commanding is what a master does to a servant; so you can say “command (me)” to indicate that you are prepared to act like someone’s servant; it’s the same as “at your service” in English.

(At this point you may be reminded of that fine Age of Mythology command, prostagma: What does “Prostagma” mean in Greek? But prostagma is what you give a soldier, not a servant.)

So when the guest comes to you as a host, you as a host get to tell them you’re quite happy to be at their service: “well may you be commanding me”. 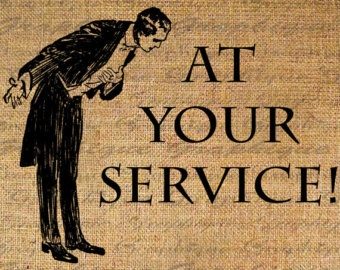 The “at your service” equivalent itself in Greek is “command!” This should have been ορίσετε orisete in the politeness plural, but it’s always rendered as the reduced form ορίστε oriste. It originally meant “at your service”; you use ορίστε in Modern Greek to mean “go ahead, I’m listening.” Which is a short distance from “at your service”:

—Nick!
—Oriste. [At your service]
—Take out the trash and stop spending time on Quora!
—Grumble grumble.

It can also be used to mean “here you go”; the shift is from “I am at your service” to “I am complying with your request through this”:

—Nick, will you get me a cracker?
—(handing over a cracker) Oriste. (Here you go.) [I am complying with your request, which is part of me being at your service.] 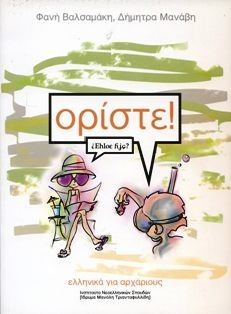 —Mumble mumble mumble please?
—Oriste? (Pardon?) [I’d… like to be at your service; what’s the service again?]
—I said: Take out the trash and stop spending time on Quora!
—Grumble grumble.

—Vicky Gunvalson is a fine human being, and an exemplar to our nation.
—… Oriste?! (WTF?!) [I’d… like to be at your service, if only I can be certain that I heard you right and you are not in fact a lunatic] 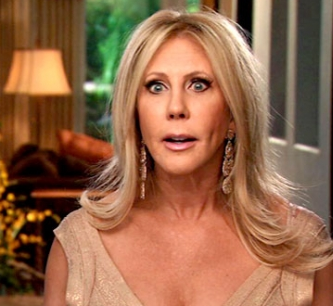 And moving further, ορίστε μας “oriste to us”, is an expression of disgruntlement: “how rude! how shameful! what a mess”. Holton et al.’s reference grammar explains it as an ethical dative: “Here you go [referring to a situation that’s crap] for us”.

The singular form, όρισε orise, is what you’d have expected before the 19th century. I’ve only found it in the reduced form όρσε, orse. In 17th century Cretan, it already means “go ahead”: (Stathis IV 174: Όρσε, Πετρούτσο “Go ahead, Petruccio”—spoken by the pedant to a servant, so it’s no longer the literal “at your service”.) But it also has already shifted to mean “here you go”: Anthimos Diakrousis, War of Crete, 6.621: Ὅρσε τὰ κλειδιά, τὸ κάστρον εἶν’ δικό σου, “Here’s the keys, the fortress is yours”—spoken by the Venetians surrendering Canea/Hania to the Ottomans.

In Modern Greek, it’s moved further still: it’s stereotypically Ionian islander, and it’s the exclamation associated with the mountza (the equivalent of flipping the bird)—which elsewhere goes with νά “behold!”. So “here you go” > “take that”, Vicki Gunvalson! [splat]. 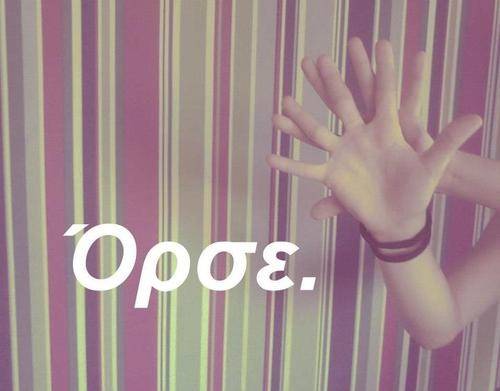 Which is a very, very far way to go from “at your service”.

3. Both the “welcome” and the “here you go” senses of oriste are also present in the Turkish equivalent verb, buyurun:

does anyone know what does the turkish phrase “buyurum efendim” means?

Buyurun efendim, literally “Say your wish, sir/madam”, used either when giving someone something (“Here you are”), or an invitation to come in or sit down (“Please do come in” or “Welcome”) 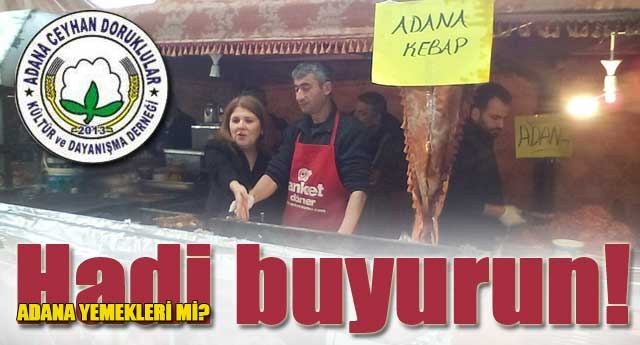 Again, it’s chicken and the egg about which language came up with it first, though the Cretan examples predate Ottoman rule of Crete, so they suggest Greek before Turkish.

4. Btw, there is an English cognate to oriste and those other forms of “command”, though it is reasonably obscure. orizō is originally “to define, to delimited”. The past tense of Greek that is not delimited is the one whose aspect is open-ended—it could be either completed (perfective) or ongoing (imperfective). That’s the Simple Past of Greek, and its name is “undelimited”, a-orist.

I was hoping orison was related as well; but etymologists who actually know what they’re doing it know that it’s from French oreison < Latin oratio.

5. Both καλώς ήρθες and καλώς όρισες are spoken by the host to the visitor. The visitor formulaically responds καλώς σε/σας βρήκα/βρήκαμε, “well I/we have found you (sg/pl).” This is spoken on initial greeting; it is also spoken when you sit down to eat together. 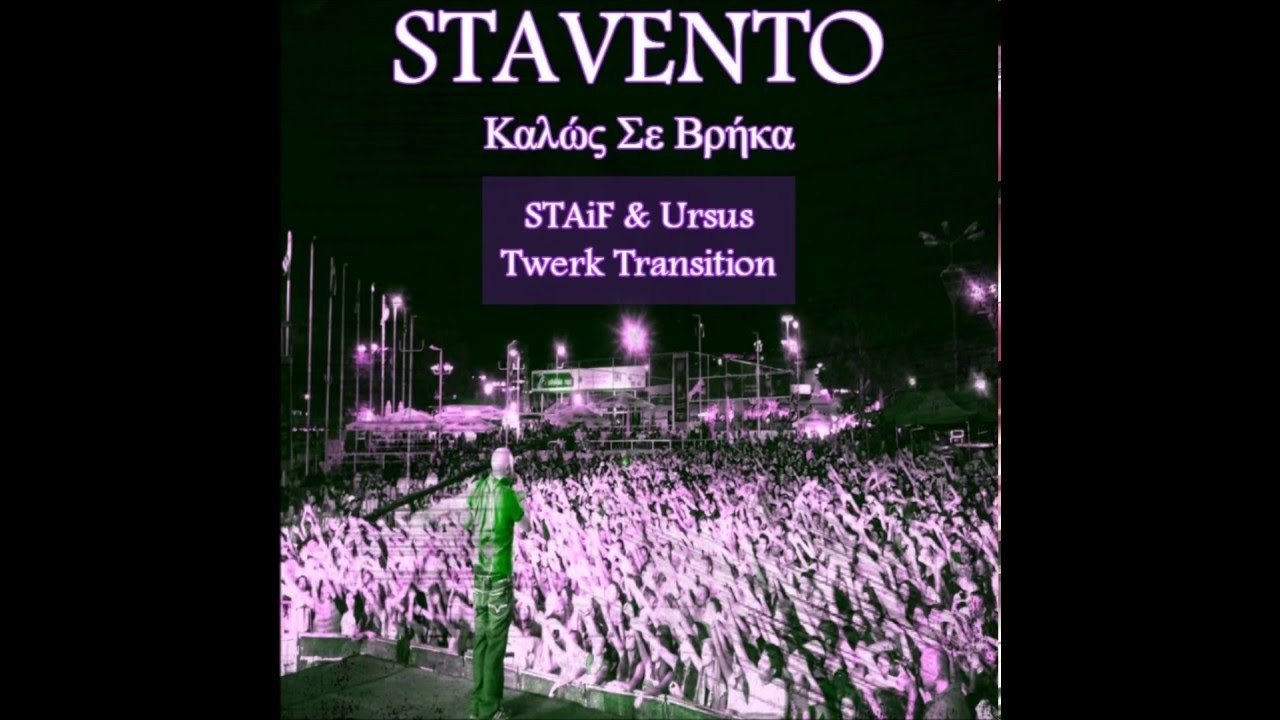 Or, apparently, when you’re performing to an audience to thousands.

And, what do you know: 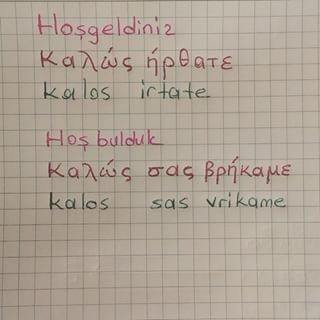 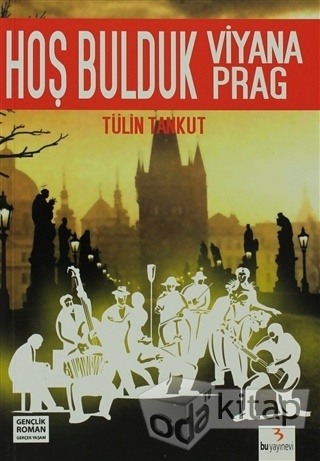 First attempt at a Quora-idiomatic pic-heavy post… about Greek grammar. Nah, I don’t think it works…

First, we need to define “near Albania”. Let’s start with this map from Languages of Greece 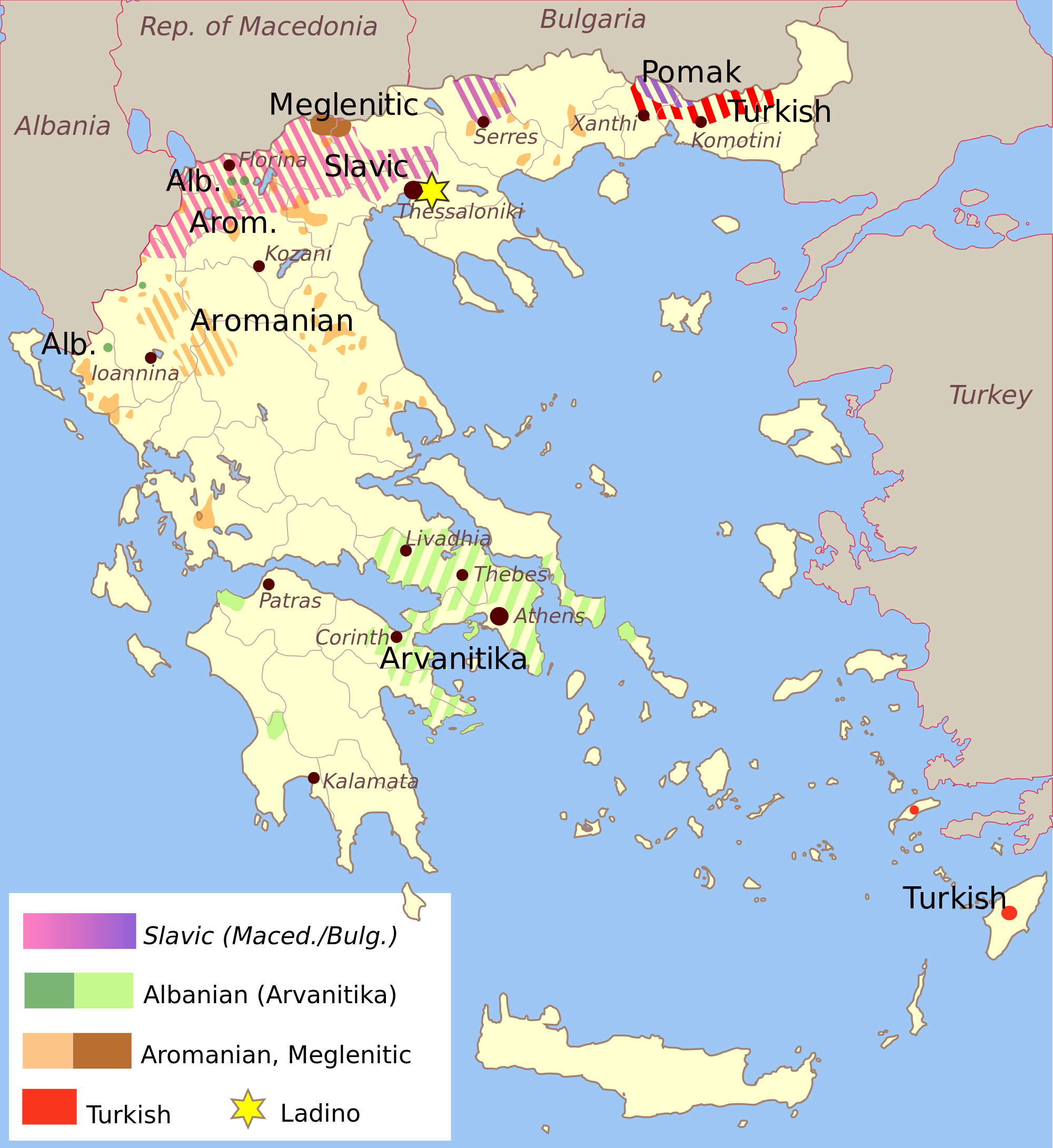 The map has a patch of Aromanian to the west of Ioannina. That’s likely wrong: that region is Thesprotia, Albanian Çamëria, and it was inhabited by a substantially Albanian Muslim population until WWII.

[Edit: actually, if the map represents contemporary populations, it’s probably right; all that’s left of Çamëria is that small green dot. I think the Çam population is down to a dozen.]

Just north of the Greek–Albanian border, is the region Greeks call Northern Epirus, where there is still a Greek-speaking minority.

So you have, moving in a crooked northwest from Ioannina:

And the map is patchwork, and there is presumably a continuum in Ioanninia prefecture up through Pogoniani, but yeah.

I’ll ignore Northern Epirus: they’ve a Greek enclave, so of course they’ll have a lot of Albanian. What’s more interesting is, how much Albanian got into Ioannina dialect, being at the northern edge of contiguous Greek-speaking territory. (And yes, that’s Aromanian immediately to its right: Metsovo is the Aromanian heartland.)

There are some dictionaries of Epirot dialect. The one I happened to have on my shelf was not at all promising:

It had oodles of Turkish words, some Venetian words, and only one or two Albanian words.

I was going to go further afield, and check out Bongas’ 1964 dictionary (which is rather large, but etymologically patchy), or Aravatinos’ 1909 dictionary. But I didn’t have to.

Nikos Sarantakos maintains the premier Greek language blog, Οι λέξεις έχουν τη δική τους ιστορία. The post Πενήντα ελληνικές λέξεις αλβανικής προέλευσης is his article on 50 words in Greek of Albanian origin. He’s eliminated obscure words from earlier lists (he’d redacted down a list of 89 words); but I’ve got to say, I’ve only heard of 23 of them, and I doubt I’d use more than 5 [Counted: ok, 10]. Note the Greek question marks (;) against several, btw: Balkan etymology is a difficult business.

The Greek nationalists unfortunately discovered the post, and the comments thread gets nasty quickly. But before it did, commenter Grigoris Kotortsinos (comment: Πενήντα ελληνικές λέξεις αλβανικής προέλευσης) mentions that the book

mentions 183 Albanian words in the local dialect, and then cites the 55 he has heard in use.

Obvious, but good to see it documented.