Context: Lyonel Perabo’s answer to What does your accent sound like in English?

In which Lyonel once again regaled us with his Mad Map Skillz: 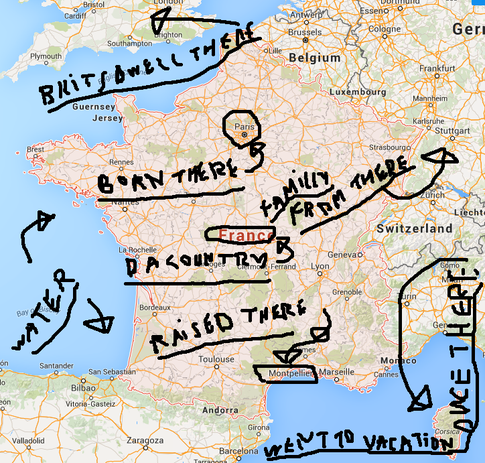 Your maps are awesome! Keep them up. In fact, I think I’ll start doing those as well…

Context: Lara Novakov’s answer to What was the worst meal that you ate out of politeness?

Lara declared her dislike of пихтије/πηχτή (aspic), which she said she dislikes even more than бораније/φασόλια (green beans).

We had some banter on this, which I ended up rendering in art: 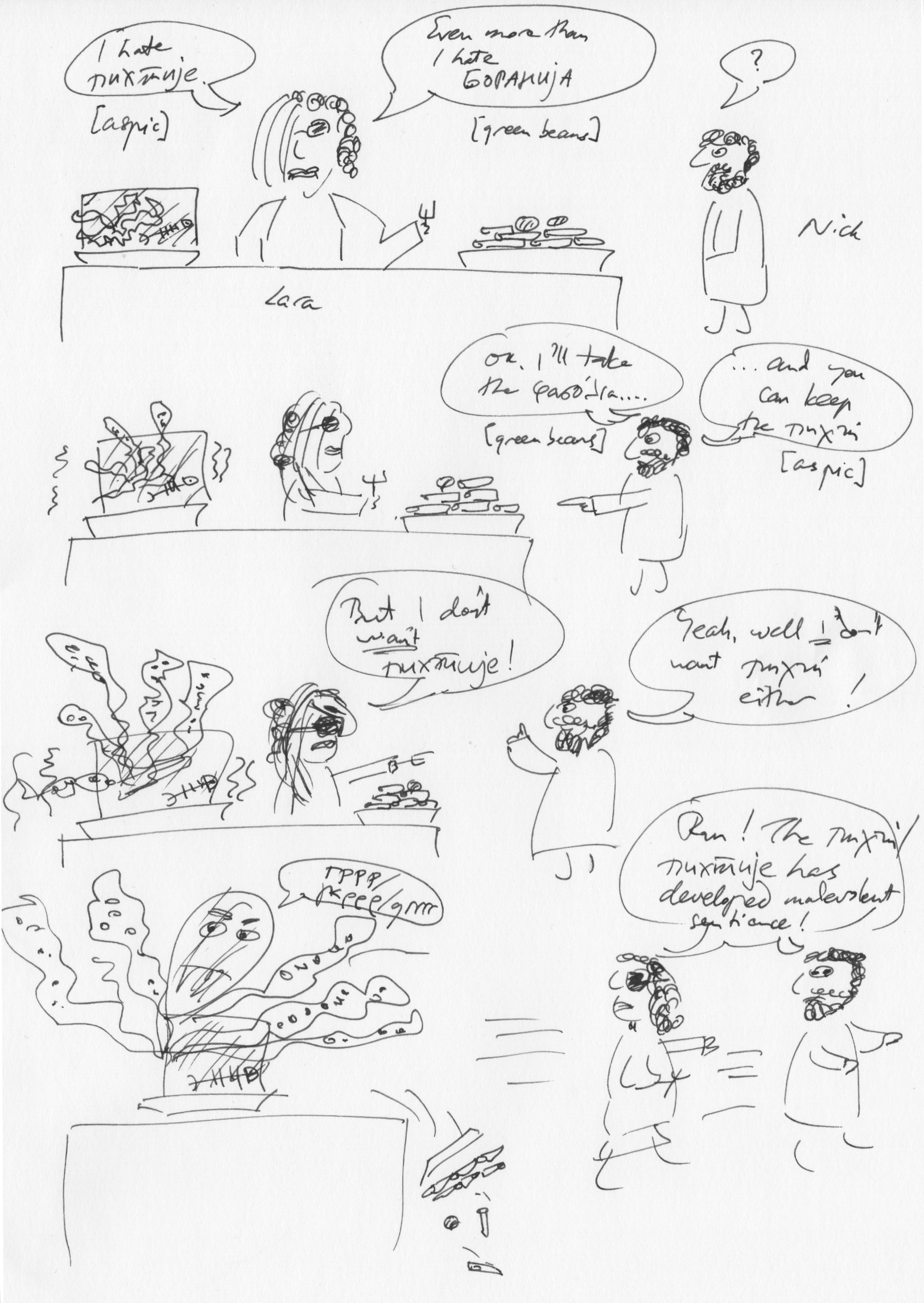 And who am I to disappoint…

The thread that keeps on giving.

Context: Beth Briony’s answer to What does your accent sound like in English?

Annika Schauer, she who once loaned Jimmy Carter an alarm clock, responded:

(Checks Wikipedia: Maisie Williams.) Bristol? But Arya doesn’t sound like a pirate, and Beth’s from the Saff East, not the Saff West…

Slight. As with Are να and ας translated identically when used with a first person plural verb in Modern Greek?, it’s mostly a nuance thing:

OP here. I know a circumstance where it’s happened, and why; I was curious whether it was really a one-off.

Ludovik Zamenhof, son of a czarist censor, invented Esperanto, and maintained a voluminous international correspondence in Esperanto throughout his life.

When WWI started, everyone’s mail in the Russian Empire was subject to censorship, and Zamenhof’s was not going to be an exception. So an Esperantist had to be found to censor Zamenhof’s mail overseas.

Now, the Esperanto community is reasonably small, and it would be unlikely for an Esperanto-speaking censor in St Petersburg not to be familiar with the recipients of the mail. And given the good feelings between Esperantists, it’s not that surprising that the censor, Efstafeyev (sp?), would add in the margins his own curt little greetings to the recipients.

If you’re going to have your mail censored, that’s probably as good an arrangement as any.

Predictably enough, it didn’t last. Soon enough, Efstafeyev apologetically adds the marginal comment that from now on, all correspondence with Zamenhof has to be in a mainstream language like German or French. His superiors presumably thought the arrangement a bit too cozy…

(So when Zamenhof was trying for his translation of the Bible to be published in England, he had to write in French—and he couldn’t mail the manuscript at all: it was only possible to send it out of Warsaw after the war, and Zamenhof’s death: De Kembriĝo ĝis Edinburgo – 20 jarojn por la Esperanta Biblio (1).)

In the existential sense that you’re using, είναι ένας άνθρωπος means “it is a man”, and υπάρχει ένας άνθρωπος means “there exists a man”. The latter sounds as formal and logical in Greek as it does in English, though I think it is more widely used than English as an interrogative or negative. The former is pretty much an answer to a question, and presupposes that the context is known; for example, it would make sense as the answer to “who’s there?”

(Oh, and using the indefinite article is always a red alert for translationese: it really doesn’t get used that much in Greek.)

The idiomatic rendering of “there’s a man”, introducing their existence out of the blue, is neither: it’s έχει [έναν] άνθρωπο, “it has a man” (cf. French il y a, and Portuguese tem). So when a diver first saw the shipwreck with the Antikythera mechanism, he exclaimed: κάτω έχει ανθρώπους και ζώα σπαρμένους, “there are men and animals sown [= scattered] down there”: «Κάτω έχει ανθρώπους… σπαρμένους».

In formal Greek, you can use υπάρχω with a predicate, to indicate a person’s previous appointment: Ο κ. Πετσάλνικος που υπήρξε αρμόδιος υπουργός όταν ξεκίνησε η προδικασία της υπόθεσης “Mr Petsalnikos, who “existed” [served as] the responsible minister at the beginning of the litigation” (Ο Καλατράβα του Κορυδαλλού). But that’s journalese, not natural Greek: υπάρχω does not normally take predicates.

As others have said: sometimes, coincidence happens.

сидеть, like sit, comes from Proto-Indo-European *sed-, via Proto-Germanic *sitjaną.

So your question, OP, is actually why are *seh₁-d and *sed– so similar. And the answer still is, sometimes, coincidence happens.

I’m saying the same thing as JJ Hantsch, but with different emphasis.

The gaining of clusters is pretty random, because unaccented vowels can drop out anywhere. Northern Greek dropped all unstressed high vowels, and all of a sudden had to deal with clusters like piðo > pðo “I jump” or mikros > mkros “small”. (At least some variants have dealt with it by epenthesis: imkros. Because mkros NCCVC is an unusual cluster, at least with the NC not being homorganic.)

The simplifications are not fully predictable: for example, Tsakonian has pummelled Greek clusters into CV, with unusual shifts like st > tʰ and tr > tʃ. But yes, I think we can say there is a tendency towards CV in language; it’s just a gradual, random, piecemeal, and easily disrupted tendency—to the extent that it’s not much of a tendency.

Do syllable templates change, as in languages going from CCCVCCC to CV? They can; Tsakonian did. And they can go the other way too, as Northern Greek did.

That’s why dialectology is awesome btw. You get to see multiple outcomes from the single starting point.

What Lyonel said. I’m away from my references 🙁 , but see North American Icelandic.

The story is that Icelanders noticed the merger in the 1920s, stigmatised it as “fisherman’s language”, and got rid of it successfully (although the link says that the e/ö merger is still around). In North America, of course, no prescription, so flámæli has kept going, which what the linked book is about.

The importance of flámæli, which is why I keep mentioning it here and misspelling it, is that language change can be reversed through prescription, but you need special circumstances; and Icelandic is as “special” as it gets (small community, universal literacy). And given that the e/ö merger shows up in Reykjavik teens 60 years later… I guess the success was only temporary.

Also noted on: Has Quora been unfollowing me from the people I follow? by User on Rage against Quora.

In my instance at least, neither I nor the followee had been edit blocked.