Adding my reaction to the thread when I saw it:

Why did Quora rescind automatically forcing users to follow any question they answer? It was a great feature previously (and the time before that, though that was before my time on Quora). Having to follow manually each time is extremely annoying. At least make it optional under settings.

What infuriates me most about this feature on-again off-again (as opposed to all the other myriad missteps of Quora Product “Development”) is that it was only divulged to the Top Writers. Presumably, it was rescinded in response to the preferences of the Top Writers: Konstantinos Konstantinides’ answer to At what points has Quora enabled and disabled the feature that automatically follows questions that you answer?

The Top Writers are not representative of all Quora writers. And this preference certainly isn’t mine.

Dimitra Triantafyllidou. In a good way. Because she often calls me to account, and not infrequently corrects me. I don’t enjoy it, but I do appreciate it.

BNRB (Grrr) compels me not to name the bad nemesis (in the literal sense). Suffice to say, he’s a guy with what I consider an unhealthy obsession with treating questions about the Roman Empire as questions about the Byzantine Empire. (Yes, they are contiguous, but we know what time period anyone but an ideologue means when they ask Roman Empire questions, and it isn’t the 15th century.) He’s blocked me, I’ve muted him (because I regard blocking as unmannered), and I mostly stay out of his foul-mouthed way.

I keep them open in a separate tab for a later time; I might take a day or so to get to them. I often get a lot out of longer answers (though not always), but they’re not part of my inbetween-tasks graze of my Quora feed.

(If Dimitra didn’t know about the deal before, she sure does now.)

I write lots of scattered other stuff too, including linguistics, music, and conlangs; but Greek language is my main gig.

Oh, and I draw cartoons of people I like here. This, so far, I like the best, not least because it features Lyonel Perabo, who A2A’d me: 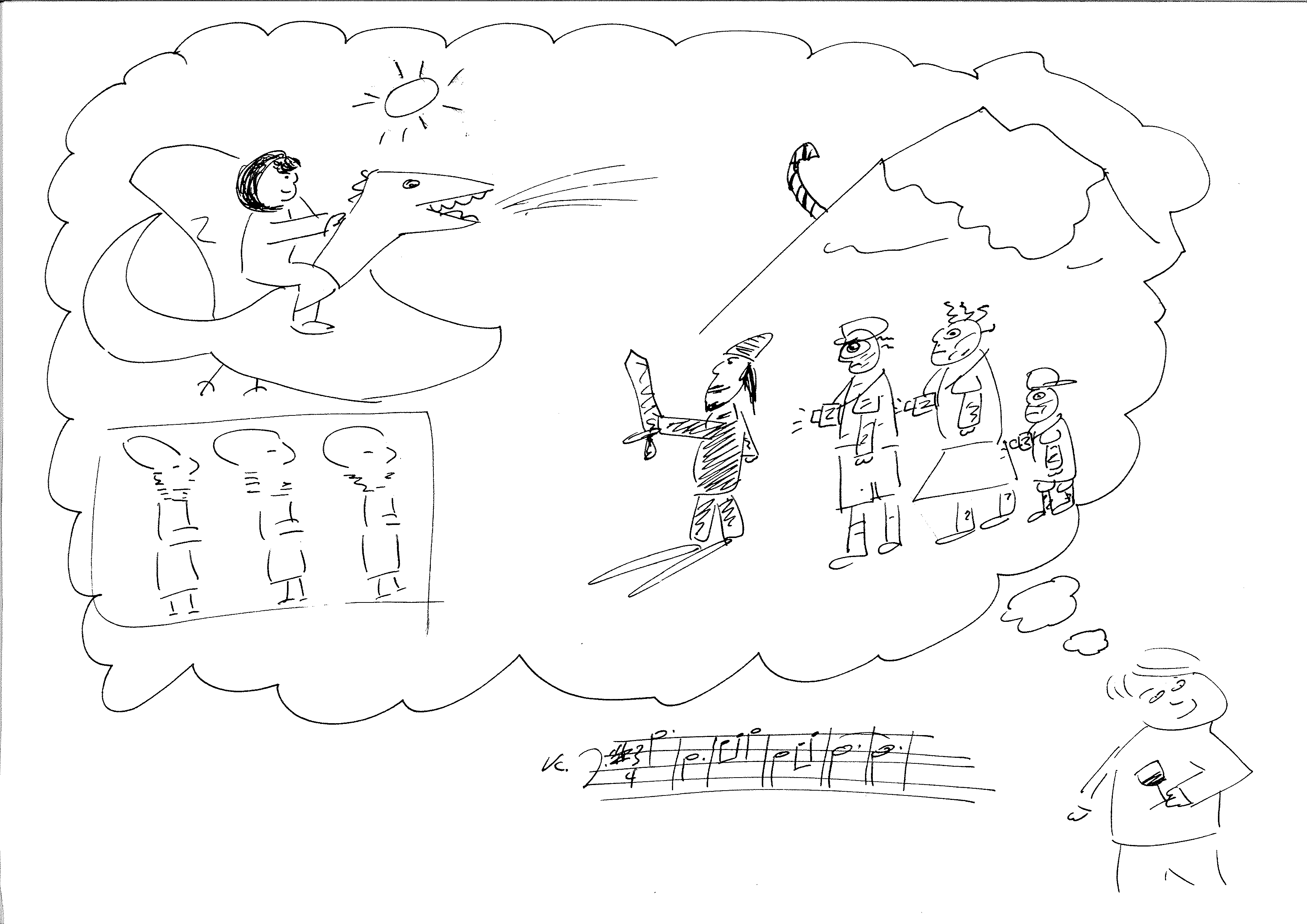 What do they think? *sigh*

The students at the Classics Department in the University of Auckland have this channel on YouTube: https://www.youtube.com/channel/…

In which they have published three recordings of pop songs sung in Ancient Greek, with Erasmian pronunciation.

They are exceedingly clever renderings, both in translation and staging. Mama Mia even has a Sappho quote. The students at the Classics Department in the University of Auckland make me proud to be Antipodean. (Because Australians like taking credit for their cooler cousins.)

If you can read Modern Greek, and delve into the comments…

… Well, if you delve into YouTube comments, you deserve what you got. But it is particularly disspiriting. Poke your own eyes out level disspiriting. I am grateful that at least some Greeks leapt to these kids defense’ (even if a couple of them still thought Erasmian was bogus). The majority just made dick jokes (spelling “dick” in Erasmian: πόυτσο. Ha. Ha. Ha).

Most Greeks aren’t aware that Ancient Greek was pronounced differently, and too many of those who are think it’s a Western conspiracy against them. They don’t base this on any knowledge of Ancient Greek epigraphy, or any consideration of how noone is going to invent the alphabet and then come up with a dozen ways of writing /i/. They base this on a rigid refusal to think outside the Reuchlinian box of their own knowledge of Greek.

Such japes might cause much merriment at first,
or second even; but I warrant you,
that by the fifteenth time that poetaster
had made his verse response to some request,
the joke by then would be well past its prime,
and this ill habit taken by its readers
as evidence of mental feebleness—
as seen with Judge Roy Ashland on the West Wing.

We have the following question as data, and we will assume that there is no intrinsic bias to people self-selecting in the survey:

How do Quorans score on the Political Compass Test?

As of this writing: 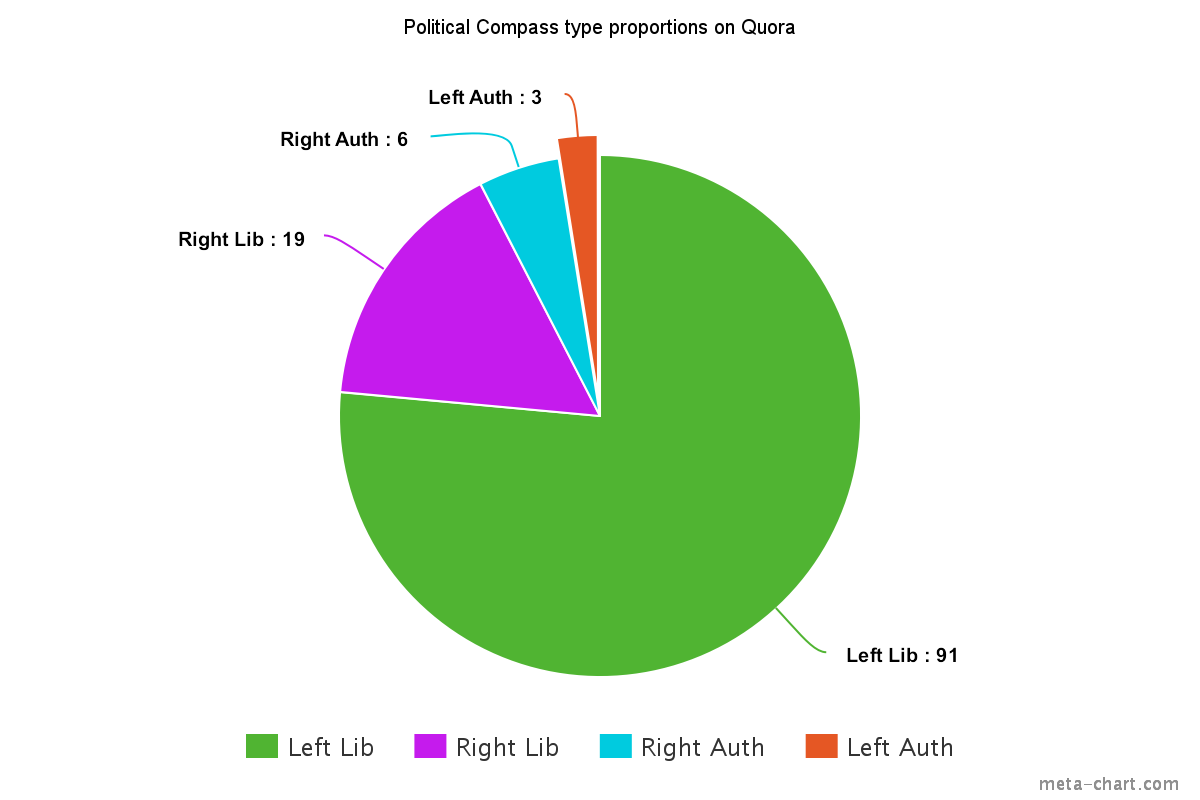 … The answer based on the aforementioned question is: yes.