How many months ago did you A2A me this, Zeibura S. Kathau? I’ve been clearing out my backlog. 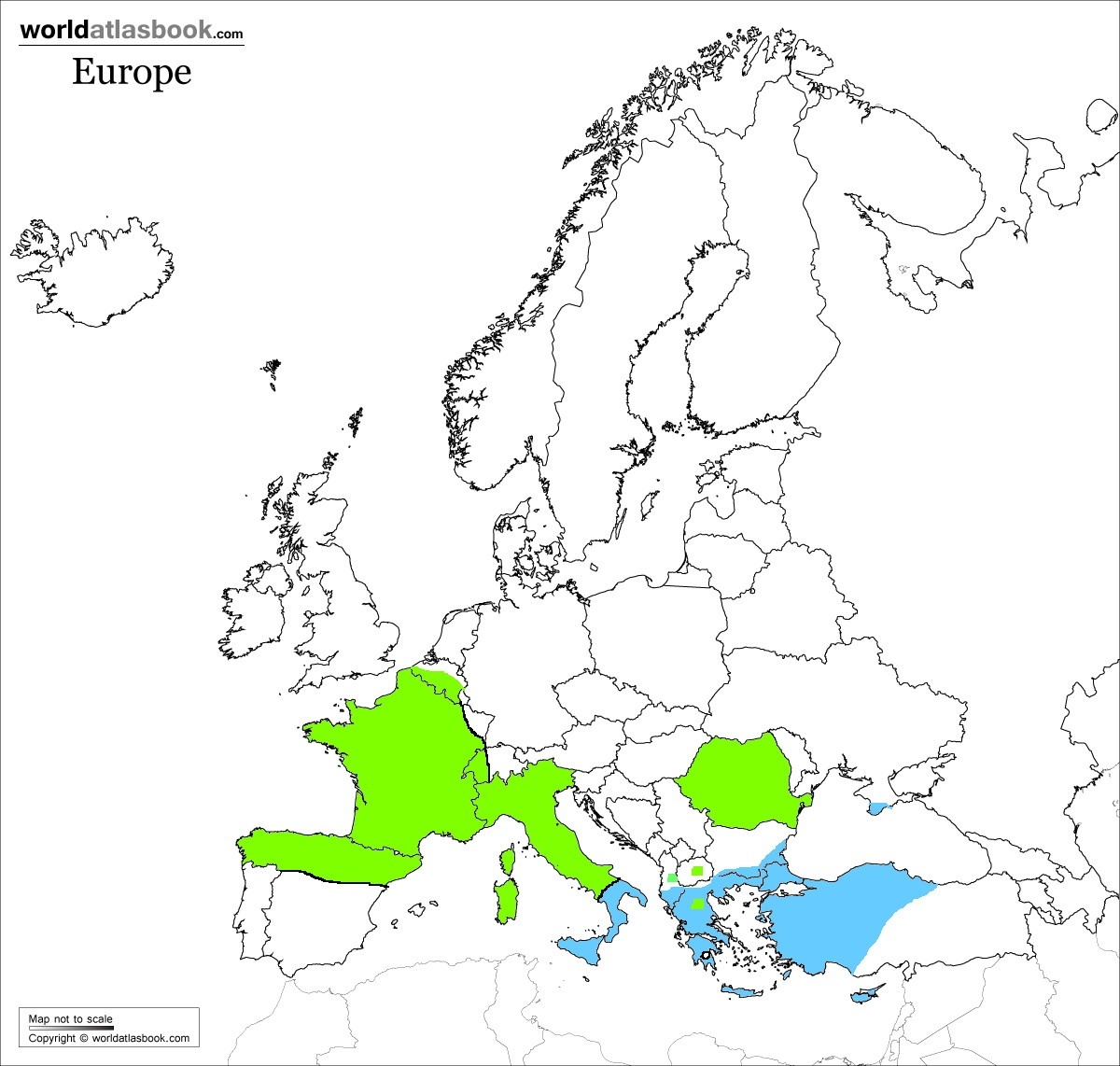 A rough guess at 800 AD dominion of Romance and Hellenic languages.

The question is somewhat opaque, but OP is getting to the question of, why is the definition of a word such a complex, and potentially circular, graph of links to other definitions. Your original question, OP, was in fact about circularity.

Look into Wierzbicka’s work, OP. Even if you don’t like the approach, it’s got some excellent insights. And start with the early stuff, including Lingua Mentalis itself.

Several culture-specific factors, as others have pointed out: scarcity, attitudes towards ethnic minorities, constructs of beauty, yadda yadda.

I conducted the extremely scientific experiment of searching mavromata “brown-eyed girl” and galanomata “blue-eyed girl” on the Greek lyrics site stixoi.info. Brown-eyed win 87 to 20—despite blue-eyed Greeks being rather rare. And there is a definite cultural construct of brown-eyed girls in Greek song: that of the penetrating glance.

And yet, there’s that lovely poem by Dimitris Lipertis in Cypriot dialect: “Hey, blue-eyes, hark! They’re knocking!/ Oh mother, it’s just the pig.” (about a girl trying to cover up her nighttime tryst).

… OK, it sounds better in Cypriot.

The archaicness of -trix is indeed very very relevant to the topic.

I agree with Jason Whyte’s answer, I’ll just elaborate on it.

When English ideologically moved away from gendering of roles, –trix was pretty marginal already, so people just forgot it was ever there: dominator/dominatrix is the only instance where -trix is alive and well. –ress is far from dead, but English is pretty ungendered much of the time, and it was easy for –er to generalise from masculine to generic. Not all the time: the US prefers she’s a server to she’s a waiter—but note, it’s still serv-er. The masculine connotation of -er was weak enough, and -er was generic enough already in meaning, that it could be ignored.

At this point, you could retort that –man in Old English meant “human being” (“man” was were), and people should have accepted that –man was generic. Well, they could have, but they didn’t. People interpret the meaning of morphemes in a synchronic paradigm (what other words and suffixes do I know right now, not historically). The synchronic identity of –man and man has been too compelling for people, and (this is also crucial) the use of –man as a suffix infrequent enough that it was never as generic as –er.

If you’re asking about the etymology of idiolect:

If you’re asking why there are idiolects, where they come from:

We like to abstract languages, sociolects, and dialects as the common property of a language community. But that is always an abstraction.

Idiolects are the source of all language variation and change: those variations are levelled and grouped together because people talk to each other, and that’s how the higher groupings of languages, sociolects, and dialects are real.

This question has been sitting, lonely and neglected, in my inbox for quite a while.

I’ll answer it so it can be out of my inbox. I don’t have any special knowledge about it, but:

That’s a very open question, and I’m going to take the easy way out:

corresponds to the factor of Context and describes a situation, object or mental state. The descriptive statements of the referential function can consist of both definite descriptions and deictic words, e.g. “The autumn leaves have all fallen now.”

focuses on “the message for its own sake” (the code itself, and how it is used) and is the operative function in poetry as well as slogans.

relates to the Addresser (sender) and is best exemplified by interjections and other sound changes that do not alter the denotative meaning of an utterance but do add information about the Addresser’s (speaker’s) internal state, e.g. “Wow, what a view!”

engages the Addressee (receiver) directly and is best illustrated by vocatives and imperatives, e.g. “Tom! Come inside and eat!”

is language for the sake of interaction and is therefore associated with the Contact/Channel factor. The Phatic Function can be observed in greetings and casual discussions of the weather, particularly with strangers. It also provides the keys to open, maintain, verify or close the communication channel: “Hello?”, “Ok?”, “Hummm”, “Bye”…

is the use of language (what Jakobson calls “Code”) to discuss or describe itself.

Inb4 “If you want Reddit, you know where to find it”.

I am more of a libertarian than many of my fellows. (At least, many of my fellows that I feel political alignment to.) I loathe how BNBR is applied as a chilling effect (mostly by incompetent execution as lack of transparency, and complete lack of nuance). I delight in drawing cartoons of executioner Quorabots. I am, as my tag says, a Scott Welch-ite about Quora—except that Scott is much more enthusiastic about BNBR, and I just grudgingly accept it.

There’s several perspectives one can take on the whole sorry-ass saga of niggardly, on which as always see Controversies about the word “niggardly”.

There’s the perspective of the linguist, the language-lover, the activist, and the anti-American.

The Anti-American first, so I can get it off my chest:

Australia has a bad history with its Indigenous people, with the Melanesians it colonised, and now with the Somali refugees who are the latest marauding evil criminal youth gangs (it was the Vietnamese 20 years ago). But…

More on that later.

If a critical mass of people within a language community think the word is unacceptable, well, then it’s unacceptable. Enough people here and in related threads have indicated that it is.

It doesn’t mean they’re etymologically right; but etymology is only one factor in how words work. There’s any number of connotations words acquire without being informed by etymology: language is a synchronic system, and connotations works synchronically.

Of course, my fellow personas Anti-American and Language-Lover don’t particularly feel they’re in the same language community as the people who object to niggardly, or even the same planet. But that’s not how it works. The word’s become a trigger for a critical mass of people, and is resulting in people reporting comments on Quora: Why would one of my comments be reported because I used the word niggardly?

Back to the Anti-American:

FFS, I don’t live in your God-forsaken country; do I have to put up with your “Is X random ethnicity white” and “niggardly is a bad word” bizarre racial obsessions here too?

Well, not the former one. But yes, because you’re still part of the same language community.

Niggardly is a useful word. And it’s useful because of its added connotations: it says things that miserly doesn’t. In particular, it (probably) comes from the same Scandinavian word as niggling does, and it has the connotations of niggling that miserly does not: pedantic, fussing over details, penny-pinching.

In fricking America it does. And not to all Americans either, just a vocal minority of whingers.

And you’re still stuck in the same language community as them.

Note also that the negative connotations have taken over, because niggardly was not a common word to begin with.

Nick, pull the other one mate. You’re not an activist.

I note with interest the initial reaction of the late Julian Bond, head of the NAACP at the time, to the Ground Zero incident in 1999, where the guy was fired: (Controversies about the word “niggardly”)

Julian Bond, then chairman of the NAACP, deplored the offense that had been taken at Howard’s use of the word. “You hate to think you have to censor your language to meet other people’s lack of understanding”, he said. “David Howard should not have quit. Mayor Williams should bring him back—and order dictionaries issued to all staff who need them.”

Bond also said, “Seems to me the mayor has been niggardly in his judgment on the issue” and that as a nation the US has a “hair-trigger sensibility” on race that can be tripped by both real and false grievances.

Now I like what Bond said for a couple of reasons. One, because I’m a libertarian in matters of free speech—more so than is usual in contemporary Australia. In fact, you might even say…

Don’t! Don’t do it! Don’t say anything good about America EVERRRR!

Three, because Bond liked dictionaries. In fact, he thought all staff should have them.

Yeah. Sounds like Bond was a great American, and displayed many of the virtues some people grudgingly admire about Seppoland. (Not me of course.)

Latin would help more. And it’s a bit of a sledgehammer to adopt with your English vocab: you certainly don’t need all the Greek grammar that goes with learning Greek. It helps in scholarly vocabulary, but Greek is no longer a very productive source of new coinages; it would be more helpful just to familiarise yourself with particular technical vocabularies, where you’ll see the same Greek roots recurring.