This is not an unprecedented change in language; we think that Greek upsilon went from /u/ to /y/ in the same way. But it is a change that happens to be specific to Early Old French (Francien), because all sound changes are specific to a time and place. So I’m guessing it didn’t make it to Languedoc.

The palatalisation of /u/ appears to have spread slowly from the south, reaching last the northern and eastern region. Norse words were affected by it (cf. modern Etainhus > Steinhüs), rhymes between /y/ and /u/ are occasional in mediaeval northern texts, and the sound /u/ is still retained in Eastern Walloon.

French did have the option of respelling its <u> as something else, like <ü> or <y>. It did not feel it needed to take that option, because all the Latin (and Gallo-Latin) <u>s changed pronunciation to /y/. So it got to keep its spelling the same.

Language as it is practiced does not line up according to what is rational. It is about what is most aligned to the speakers’ ideology, and what represents the least imposition to speakers.

I’ll add that the threshold for words is much higher than phrases. Coup is no longer regarded as French, even though coup d’état might be. Neither is sortie. You’re left with raison d’être. And that’s not a commonplace expression.

Do you want practicality, or do you want historical accuracy?

Historical accuracy first. I’ve check Philomena Probert’s Ancient Greek Accentuation, and Vox Graeca. We know that the switch to stress accent must have happened by Gregory of Nazianzus (4th century): his poetry uses stress and not pitch accent as a base. We suspect that the Alexandrians were having to notate pitch accent because it was starting to die out; but we don’t know that for a fact. So the Gospel writers may or may not have had pitch accent, rather than stress accent.

EDIT: Per Philip Newton’s request: that would mean pronouncing all the different pitch accents (circumflex, acute, grave) the same way, as a stress accent.

Vanuatu has the highest language density of any country on the planet: one language per 2,000 people.

When last I checked, Vanuatu was also the last frontier for a large number of undocumented or underdocumented languages. Ethnologue is compiled by SIL International, which coordinates missionary linguists. The SIL has done a lot of work in Papua New Guinea, and relatively few academic linguists have (although it is becoming a default destination for Australian linguists, now that they’ve run out of Aboriginal languages to document). But SIL missionaries have not been welcome in Vanuatu.

Eutychius Kaimakkamis’ is the most complete answer; I’ll only add:

I understood the words and the phrases, but I had to be edified by some online links, and I’ve got an advantage in that I know why Jakobson said it the way he did.

Exec summary: there is one takeaway message for poets:

The rest is of concern to linguists.

In structuralist linguistics, there are two structural mechanisms underlying how language works.

The syntagmatic relationship is about how words and phrases are combined to produce larger meanings. It’s syntax.

The paradigmatic relationship is about which words can be used in the slots of sentences. It’s the relationship between all nouns, or all verbs, or all adjectives. It’s lexicon.

That focusing on the meaning differences within an equivalence class (words doing the same job in a sentence) is the principle of equivalence.

Jakobson’s enduring contribution to linguistics is identifying the core functions of language. Communication is not the only function. Two functions that Jakobson pointed out, that needed pointing out, were the phatic function (keeping the channel open: “hello”, “how are you”, “ok?”), and the poetic function.

But the important thing about the poetic function is, that the form you use is a big part of the point of what you’re saying. It’s not just about the meaning of the words; it also about the fact that the words have metre, or rhyme, or punning similarities, or similar sounds. And so on.

Remember: in structural linguistics, meaning is tied up with the choices of words: the paradigmatic relation. (The axis of selection.) If you use a choice of a different word, you’re expressing a different meaning. While there is also a component of meaning in the syntagmatic relation (how you put sentences together), it’s not felt to be as interesting: we’ve got nouns, we’ve got verbs, there’s a limited way of putting them together. (Remember, this is pre-Chomsky.)

Jakobson is a structuralist, and he wants to say that the poetic function of language cares about language form. So he says it in structuralist terms: We’ve been telling you that meaning is all about the axis of selection. But in poetic language, the syntagmatic relation (the axis of combination) is also a critical component of the meaning. The fact that you’ve put together words that rhyme, or that words that form a metre, or words that echo each other is just as important in the overall meaning as your initial choice of words (the strict meaning you intended to convey as a plain text communication).

I have to say that, even without switching on Chomskian understandings of language, this is a specious way of thinking about language: different sentence structures also generate different meanings out of the combination of meaningful words, and there’s nothing intrinsically poetic about that. Semantics is propositional, not just lexical, and rhetorical, not just propositional.

But structuralist linguistics was the last time literature scholars and linguists were on speaking terms. So it was an important message for literature scholars to take in from structuralist linguistics, that poetic language is all about how you put words together, and that how you put words together separates poetic language from normal language.

Positive politeness strategies are culturally approved ways of interacting with other people, that involve doing good things for them. They concentrate on eliminating distance between people.

Negative politeness strategies are culturally approved ways of interacting with other people, that involve not doing bad things to them. They concentrate on preserving distance between people.

I’m sure you’ve recognised a stereotype or two in one column or the other; maybe even in both.

Greek is all about the formulaic expressions. If you’re the guest in a Greek wedding, you must say:

No, not really. There are Quora staff that have oversight of moderation; and Quorans have inferred that the bulk of moderation work is done by either bots, or cheap outsourced contractors (with frequent resulting hilarity). The latter have certainly not been discussed publicly.

The former can be unearthed (so Tatiana Estévez is publicly visible, and Jay Wacker and Jonathan Brill do… something, though I’m still not clear what). But it’s not particularly in any large-scale service’s interest that there be too much of a personal face on moderation: that cannot scale.

There are four major groups of ancient Greek dialects: 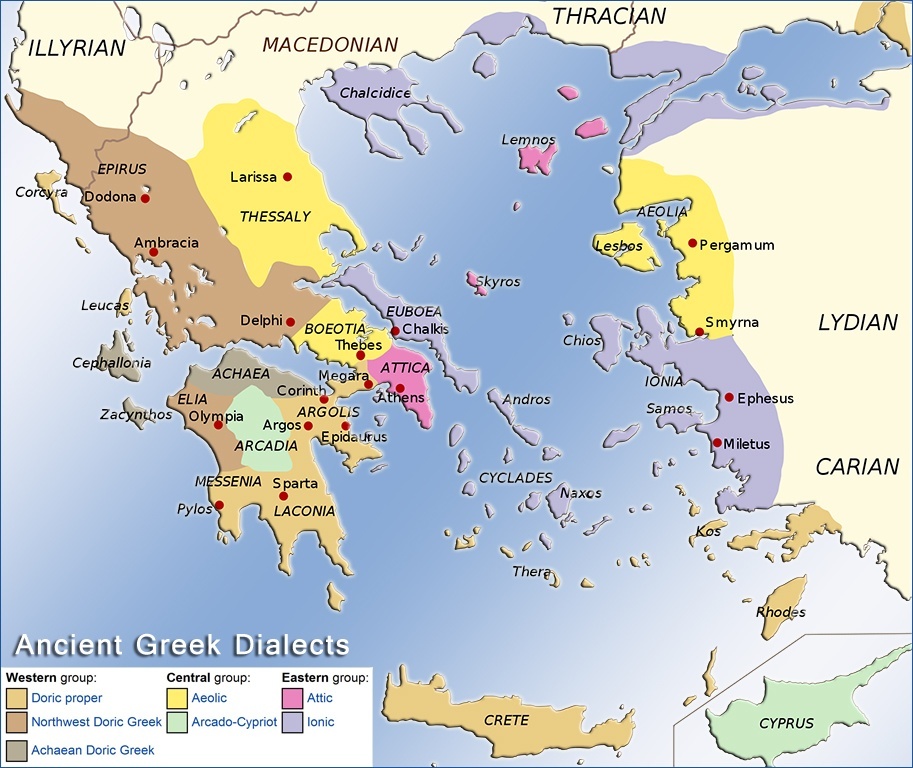 I’ve ranked them in impressionistic order of archaicness.

The easiest explanation for the spread of the North-Western group is as a wave of settlement, that you might as well associate with Dorian invasions. You can similarly make sense of Ionic as a different wave of settlement. And you can make sense of Aeolic as what was left over in between the two waves of settlement; bear in mind that anything Ionic north of Lesbos resulted from later colonial activity.

Now, notice where Arcado-Cypriot is spoken. Some mountains in the middle of the Peloponnese, and Cyprus, which is very very far away.

The default assumption here is that the Dorian invasion pushed the previous Greek speakers of the Peloponnese up into the mountains. And that Cyprus had been settled by Greek speakers speaking that dialect, before the Dorians cut them off from the sea. In other words: that Arcado-Cypriot was a continuation of the original Mycenaean version of Greek. And there are bits of Arcado-Cypriot and Aeolic embedded in the mishmash language of Homer, although it is basically an archaic Ionic.