This is Philip Newton’s prize: 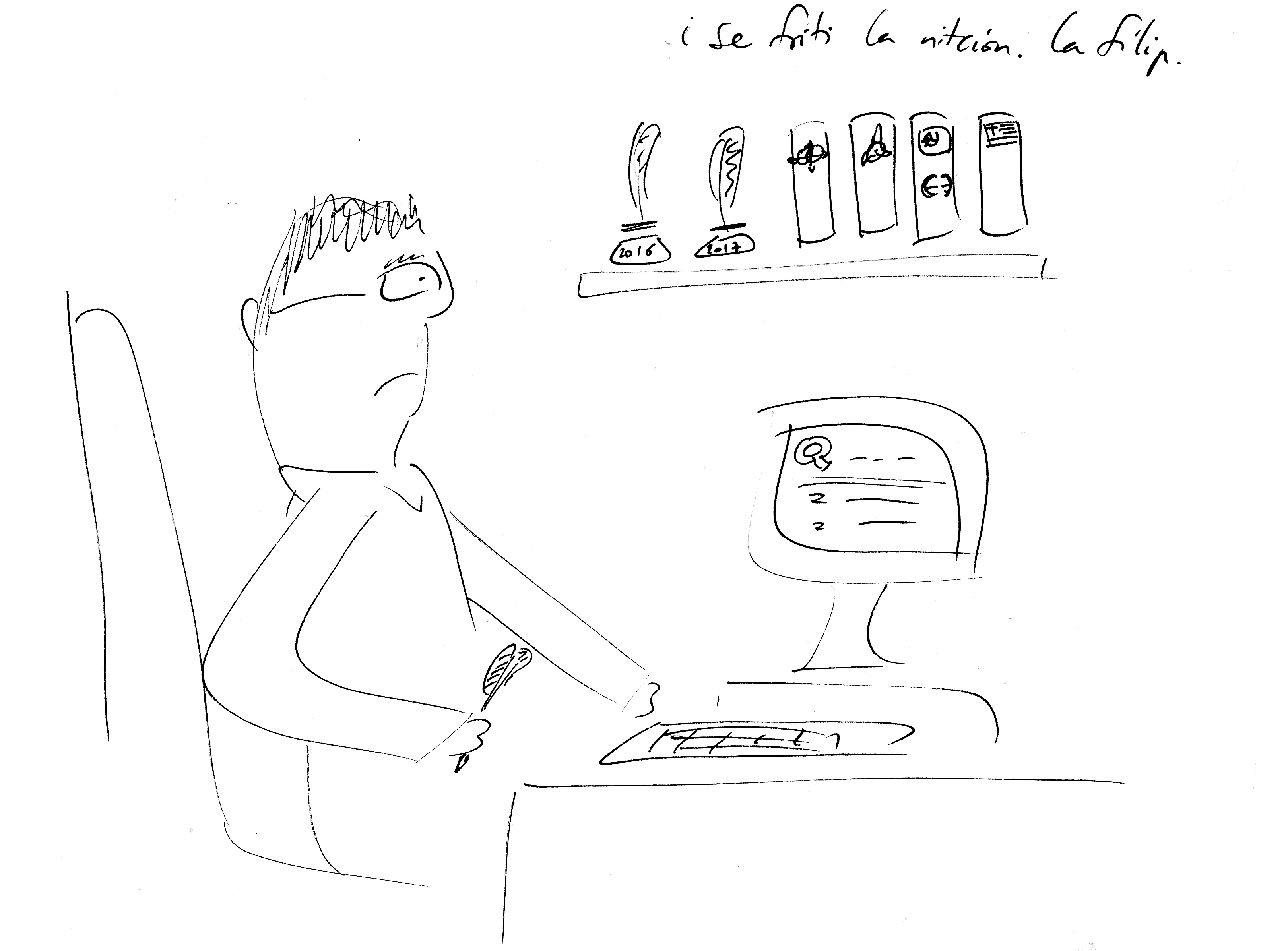 By time honoured convention in the Gallery of Awesomery, Philip is not allowed to smile. Because he lives in Germany.

Besides the two Top Writer quills on his mantelpiece (and another in his hand), there is a book apiece on Lojban, Klingon, Esperanto, and Greek. As should be obvious to all of you from the logos.

This is John Gragson’s prize: 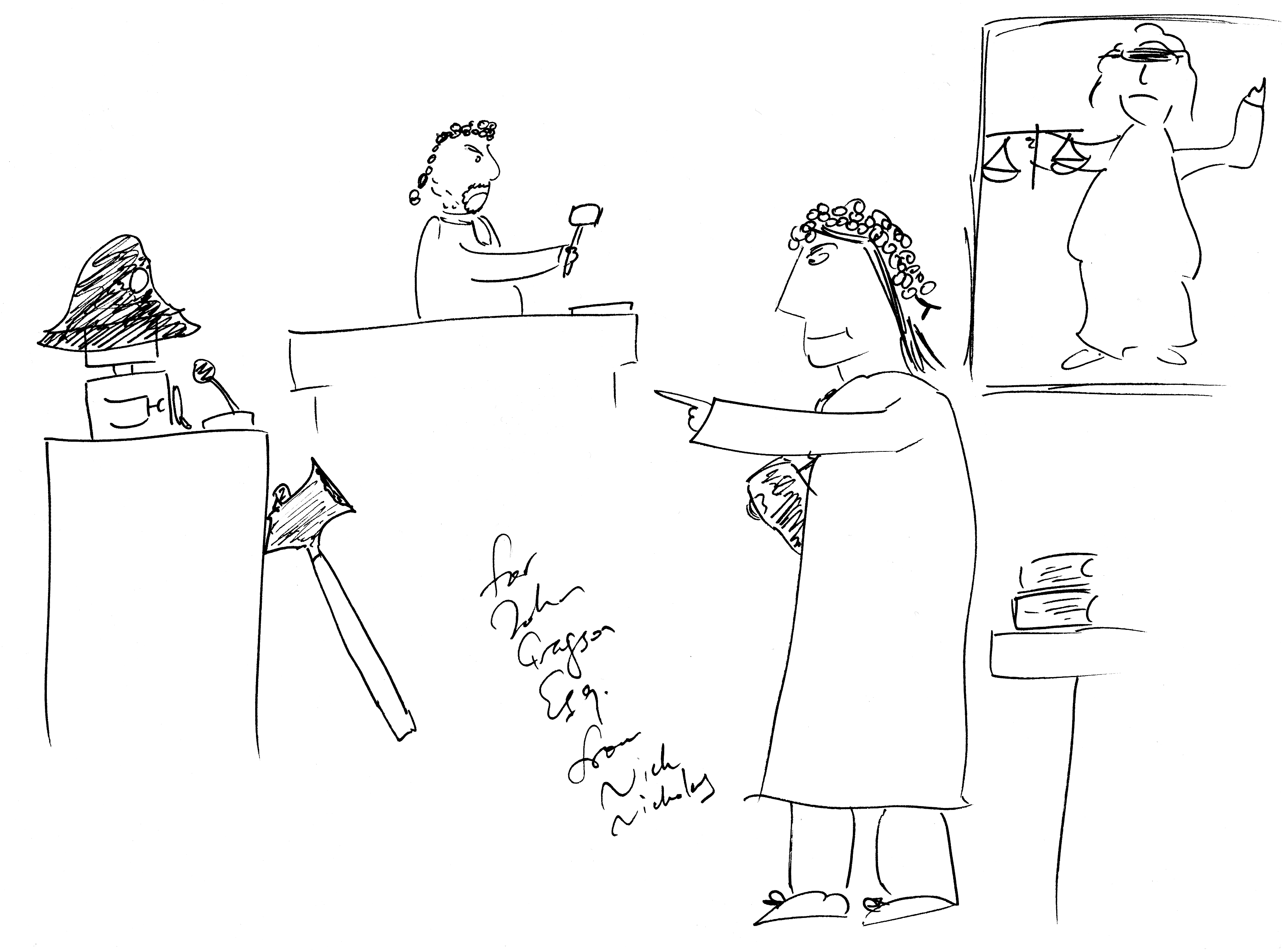 Yes, I know full well that John is not a British barrister. But English barristers are so much cooler to draw!

No, I don’t know who the judge is, complete with gavel. I have a fair idea who the defendant is, though!

And this is an artist’s rendering of the actual incident: 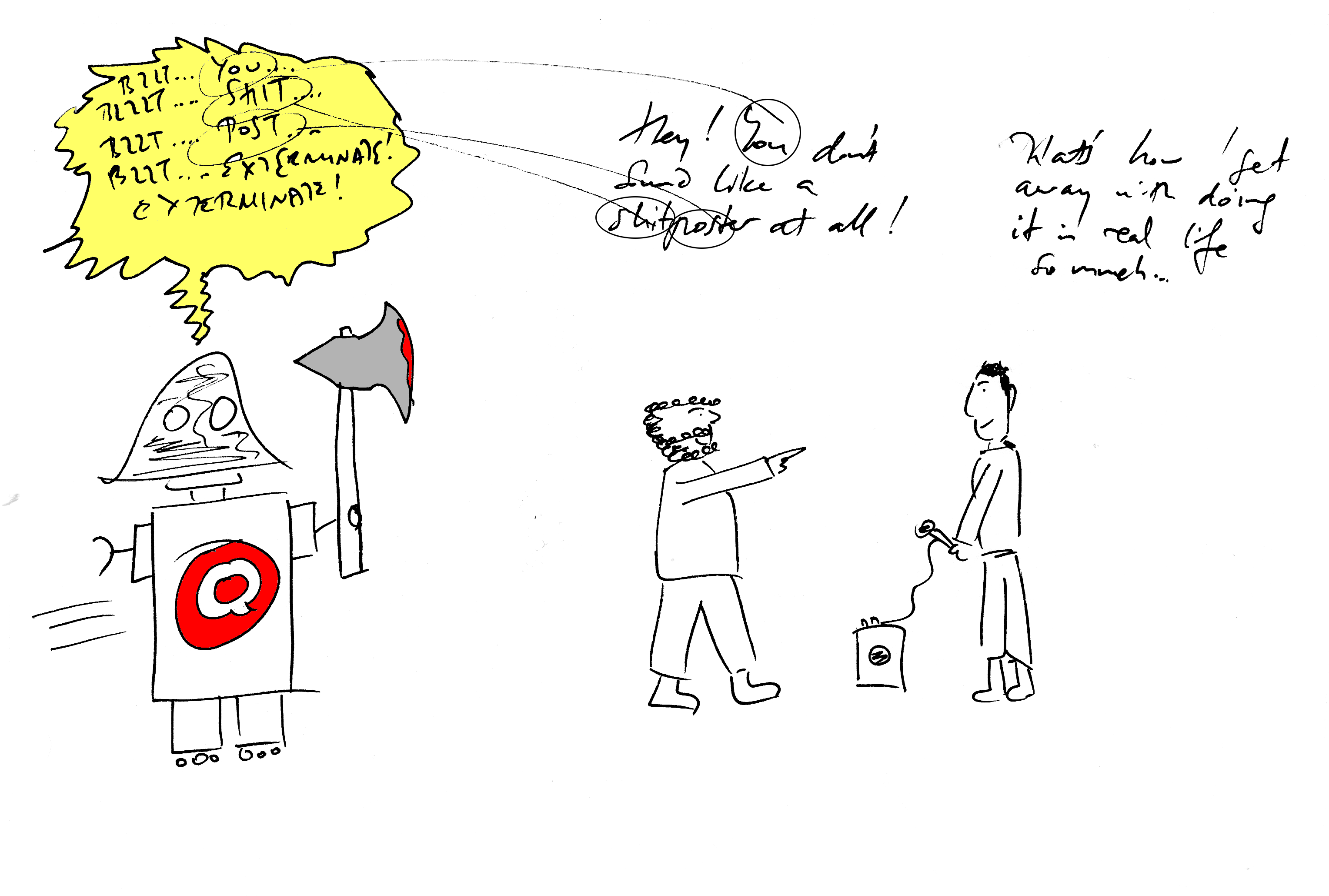 Next recommendations, from Michael Masiello.

For my part, because all the smart kids in my school did two languages, instead of one language and Art. As you can see from Gallery of Awesomery, not doing Art has paid off.

In the eighties, the two main languages being taught in Australia were still French and German, which was a cultural inheritance from Britain. So I learnt French and German. The year after my year, French and Japanese were also offered together. I would have welcomed the challenge of Japanese in my twenties, but not, I think, in my teens.

That’s why I started. Why I continued with it was falling in love with German culture, working in a discipline that depended on German scholarship, and making excellent German-speaking friends. Which I have continued to do here.

That took… an unnecessarily long time. 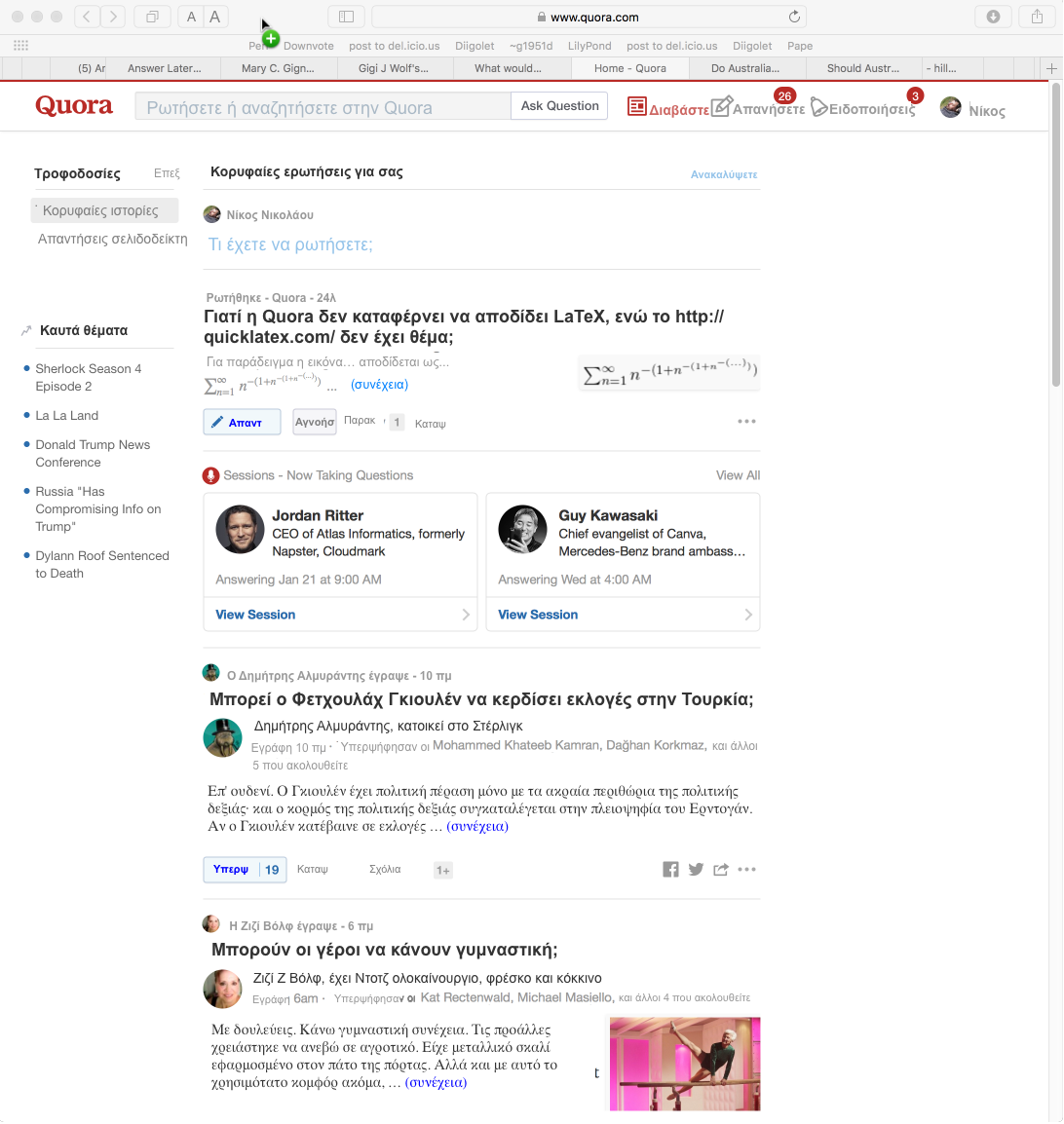 God Bless New Zealand for maintaining the time-honoured traditions we’re less attached to in Australia! James Barr’s answer to What are the “Burger-ish” foods in your culture or country? I suspect every culture has their own burger/sandwich-like food: hearty, inexpensive, easy to prepare, consistent with meat in between flour/rice/corn-based bread thing. details the venerable Dead Horse.

James Barr doesn’t call it that: rhyming slang is another, time-honoured tradition from London which Australians have now largely abandoned. Rhyme for “pie and sauce”. 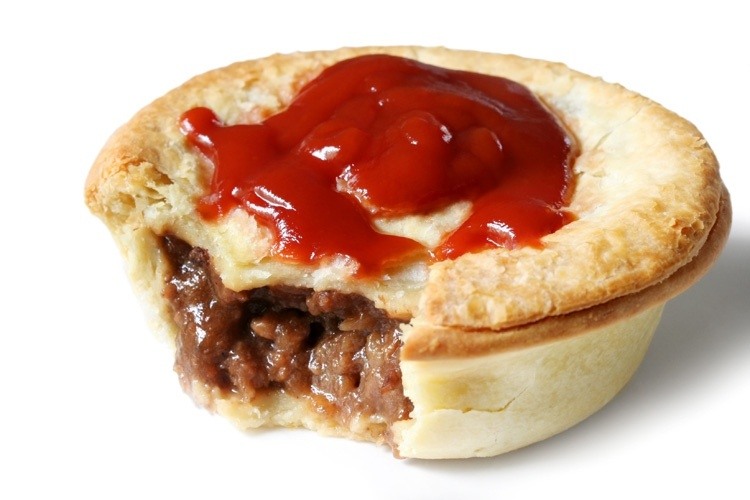 There are pies to be had still in Australia, but they don’t have the hegemony they once did. (And even back in the day, say the 60s, they shared space with Cornish pasties.)

What has taken their place? The burger, certainly. McDonalds and Burger King (here branded as Hungry Jacks) had the hegemony beforehand; but the old fashioned fish & chip shop burger was their background: 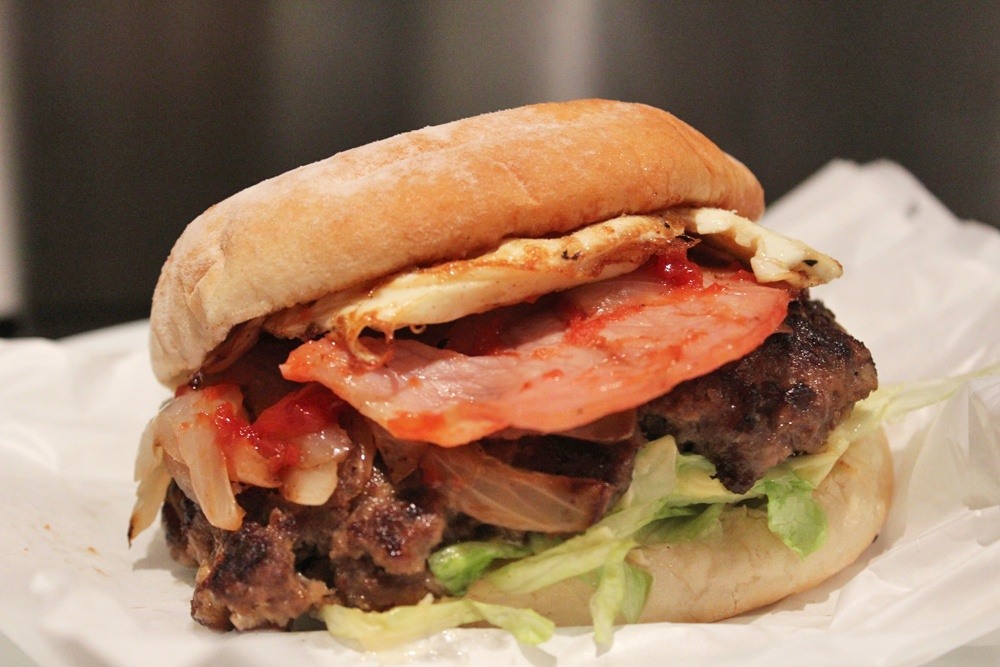 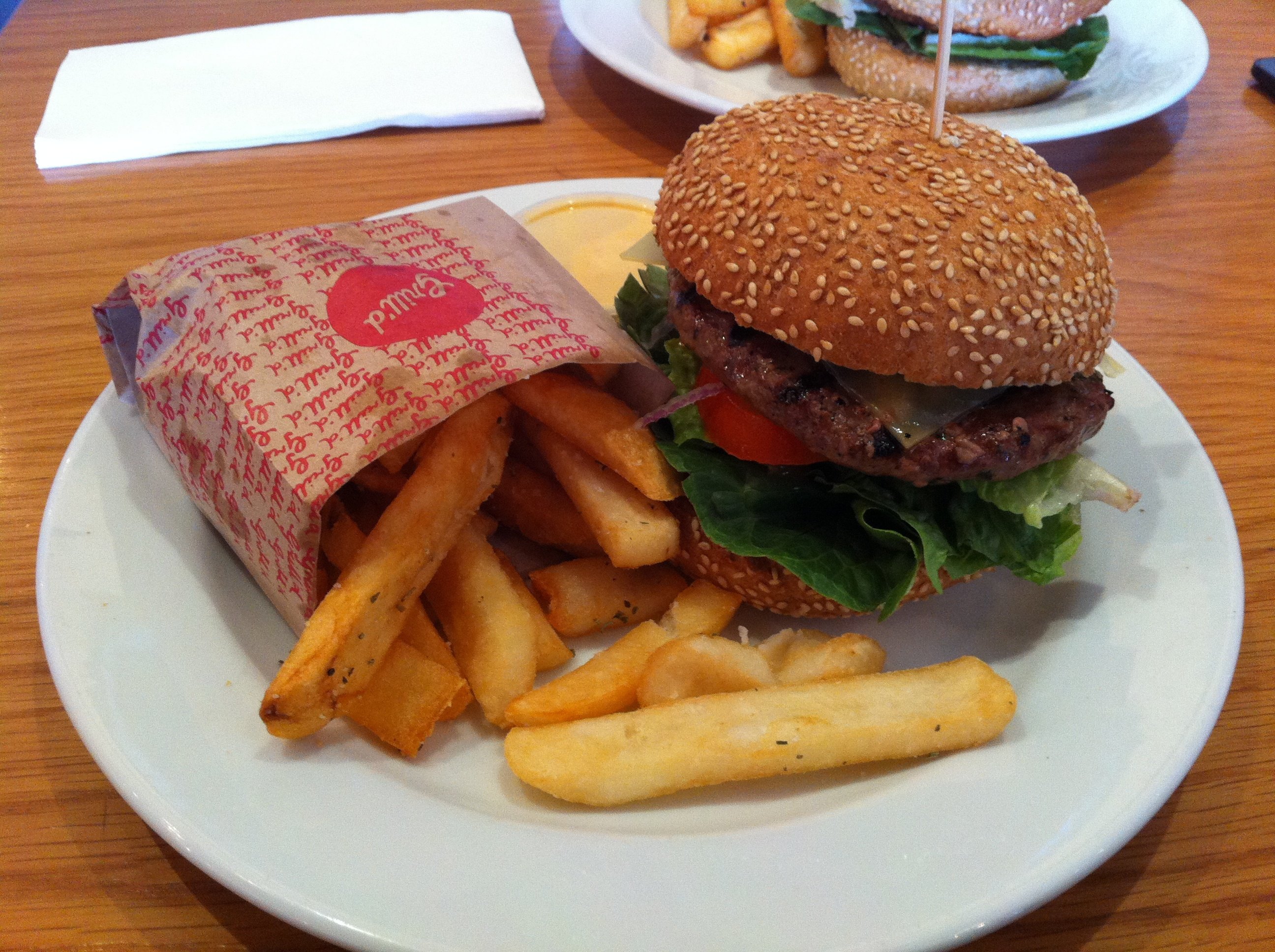 —to the extent that McDonalds is having to make their own to-order gourmet burgers, to stay competitive: CYT Homepage | McDonald’s Australia

The Steak Sandwich is the other venerable legacy of the fish & chip shop, although it’s not as big now as it used to be: 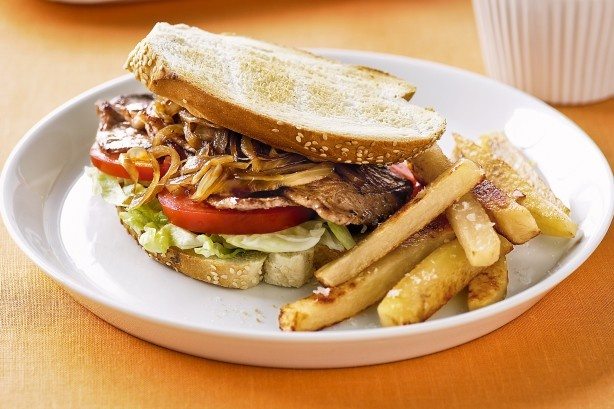 Of course, we now have burritos, and souvlakis (very very different from souvlakis in Greece), and pork rolls, and sushi.

Let’s take the Greek State as 1832, when it had fixed boundaries.

I’m also going to use the pre-2010 Prefectures of Greece to break down the area of the new State.

We know that Arvanitika was spoken widely in the new Greek state. We know that many who fought in the War of Independence were monolingual Albanian speakers, who could not understand the instructions of Greek commanders.

Arvanitika and Greek were the major languages of the new State. I’m not aware of any Ladino: Jews in southern Greece spoke Greek. Not aware of any Slavonic spoken there since the Middle Ages. There would have been some Romany and Turkish spoken. There is a pocket of Aromanian spoken in Acarnania, per Aromanian language – Wikipedia.

I don’t have population numbers handy, and I don’t know if anyone does. Going by geography, Arvanitika was not the majority language, but it could easily have been spoken by a quarter of the population.

Well, there’s all the guesses on How can I become a Top Writer on Quora?, and the little hints dropped by Quora Inc, such as in Announcing Top Writers 2017 by Jonathan Brill on The Quora Blog:

As always, selection criteria include: the number, quality, and popularity of contributions, and moderation history.

So, the main criterion applied is being a good member of the community. Although yes, lots of head scratching about the relative weighting of these factors, and opacity that doesn’t do anyone any favours.

That isn’t the only criterion applied though. Two other criteria that have been applied are: