Re my last post, To the victor, the spoils,

but this is a white figure vase – it should be a black background! Or black on orange 🙂

To which I feebly retorted:

Ah! You caught me! Black on orange was going to be too much of a technical challenge for me…

And then, Steve Theodore did this: 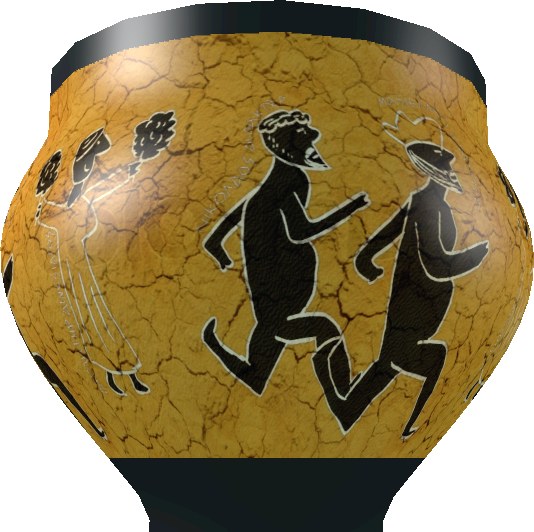 To which I can only say…

Hm. Lara Novakov is right that there was reform of both script and vocabulary, but the emphasis isn’t right, and Philip Newton fine-tunes it in his comments to her answer:

And I think that vocabulary reform had a far greater effect than the script reform.

Parents could suddenly not understand their children anymore, because what used to be called “herbology” was now “wortlore”, and instead of “consists”, they said “bestands”, and so on.

Poul Anderson’s Uncleftish Beholding gives you a kind of flavour for how alien this can appear, even if most of the raw material is from “your” language. (In the case of Turkish, I believe there was also some borrowing form other Turk languages.)

After the foundation of the Republic of Turkey and the script reform, the Turkish Language Association (TDK) was established in 1932 under the patronage of Mustafa Kemal Atatürk, with the aim of conducting research on Turkish. One of the tasks of the newly established association was to initiate a language reform to replace loanwords of Arabic and Persian origin with Turkish equivalents. By banning the usage of imported words in the press, the association succeeded in removing several hundred foreign words from the language. While most of the words introduced to the language by the TDK were newly derived from Turkic roots, it also opted for reviving Old Turkish words which had not been used for centuries.

Owing to this sudden change in the language, older and younger people in Turkey started to differ in their vocabularies. While the generations born before the 1940s tend to use the older terms of Arabic or Persian origin, the younger generations favor new expressions. It is considered particularly ironic that Atatürk himself, in his lengthy speech to the new Parliament in 1927, used a style of Ottoman which sounded so alien to later listeners that it had to be “translated” three times into modern Turkish: first in 1963, again in 1986, and most recently in 1995.

Was it a “Catastrophic Success” as Geoffrey Lewis says?

The Turkish Language Reform : A Catastrophic Success, published in 1999. Geoffrey Lewis, as the major Western grammarian of Turkish would know. If you’re having to translate a speech made in 1927, then I’d say yes, you’ve succeeded all too well.

I defer to actual Turks (such as Oğuzhan .) to tell us how unintelligible Ottoman Turkish has become, ignoring the change of script. But that kind of thing is not characteristic of most language reform.

What do I know about Çamëria/Τσαμουριά? Less than Dimitris Almyrantis, but still, I assume, more than most Greeks: I looked into the ethnic mix of the Balkans for my thesis in dialectology, since I needed to know where Greek was natively spoken.

I’ll add a couple of curios:

So, that’s what I know. More about the Çams’ neighbours, it turns out, than the Çams themselves.

What do I think of the Çam issue?

All ethnic cleansing is repulsive. All ethnic cleansing leaves its country poorer, even if it arguably also leaves it more stable. It’s ancient history, it won’t be undone, and I don’t see any prospect of reparations. It would be good if more Greeks were even aware of it. For all I know, the thaw with Turkey points to a Greece in which more Greeks are aware of it; Dimitris knows, after all.

Then again, Dimitris is in many ways unrepresentative.

I can’t count Esperanto, since I have already been fluent in it. Nor Klingon, ditto. Nor Lojban, ditto.

So let me go through the others, and say why or why not I’d like to learn it, if I was 20 again, back when I had the free time. Ranking from less to more.

Supplemental to the other answers:

David Leyonhjelm of the Liberal Democratic Party (Australia) is the most prominent voice of overt libertarianism in Australia, the way Americans would recognise it. He gets to be that by virtue of getting a Senate seat (through people confusing his party name with the Liberals, as he has cheerfully admitted).

Libertarianism is not mainstream in Australia, which rather likes Big Government. In fact, my realisation that I’m sympathetic to prioritising more individual liberties puts me out of sync with the Australian mainstream. (And in sync with groups I’d rather not be in sync with.)

Of the other parties David Caune mentions, I’d have thought (though I haven’t particularly researched it) that social conservative religiously driven parties are palaeocon, and not visibly libertarian. That includes Democratic Labour Party, Rise Up Australia, Family First, and the Shooters and Fishers Party. The populists of One Nation and the erstwhile Palmer United Party don’t count either. The Sex Party are socially liberal (including pro-euthanasia). I don’t know how libertarian they actually are, even though they are the default recipients of my protest vote.

But beyond that, as David Caune has pointed out, the Institute of Public Affairs think-tank has yielded significant influence in the Liberal party, and its rhetoric is libertarian. A recent book on the whole Abbott debacle, Battleground, was a moment when the scales fell from my eyes: explaining the ideological split within the Liberal Party, Peter van Onselen pointed out that the best way to describe the Liberal moderates was a word that never had occurred to me: libertarian.

All of a sudden, a lot about George Brandis (attorney-general) and Christopher Pyne (education minister, defence minister) made sense.

Like Vasilios Danias said, archery would have died out in Crete when rifles came to town; the point of archery, after all, was hunting. And Cretans sure love their rifles now, as Dimitra Triantafyllidou illustrates.

But there’s ample evidence of archery used in hunting during Venetian rule, when guns were but new (and presumably not very sportsmanlike), and Crete was still full of deer. In the Erotokritos, the culminating poem of the period, Charidimos the Cretan shoots his new wife with an arrow accidentally while hunting. Panoria, in the pastoral drama named after her, is a huntress who speaks of her bow and arrow. So archery was still a thing in the 17th century.

The celebratory gunfire thing is already reminisced about in the Cretan War of Marino Zane Bounialis (Pugnali), which recounts the Ottoman conquest; so it makes sense that archery died out in Crete at around that time, when rifles became universal.

1960 in the question certainly alludes to Istanbul Greeks.

The shibboleths of Constantinopolitan, which I already knew about, and which (as far as I know) it shares with Thracian dialect are: