Pegah Esmaili’s answer to Do ex-Muslims face discrimination at their homes?

No not at all, only my grandmother has a few times looked at me as if “what the fu*k are you trying to be my beloved damn grandchild? weren’t you praying till…like 2-3 years ago?”

It looked a little bit like this, didn’t it? 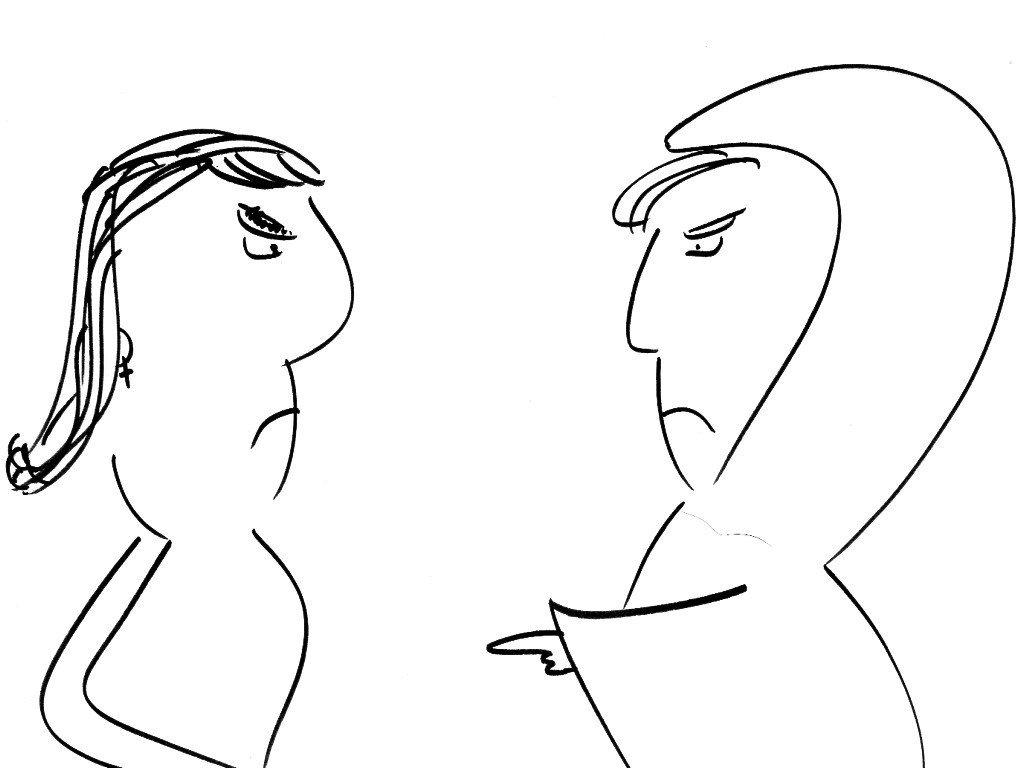 I did leave out Pegah’s altar to a potato chip. Luckily.

Other answers have addressed why there are anti-Islamic parties in Australia.

Why are there several anti-Islamic parties in Australia?

Splinterism, an endemic issue with extremist parties, and movements in general preoccupied with ideological purity rather than electoral success through coalition politics. Communism is even more notorious for splinterism, after all.

But if we go through AIJAC’s list, we see another reason: anti-Islamism is not a defining characteristic of many of the parties listed there; it’s just a common attribute of populist right/far right groupings.

I did Engineering as an undergrad. So I should have a good appreciation of statistics, and work through the odds, right?

Screw that. I played a slot machine once when I was 16, lost all the money I put in after being ahead, and I’m not doing that shit again. I refuse to set foot on my own into the Melbourne Casino (although sometimes I have no choice, such as my cousin’s wedding reception, or my wife buying tickets to see *sigh* Richard Marx).

Besides, Melbourne Uni’s teaching of Engineering is crap, and the way they teach maths to engineers is even worse. You can taste the contempt from the lecturers. Anything I learned in probability and statistics went in one ear and out the other.

Which, of course, is why I am not loaded.

Thank you very much, OP, for providing the link.

This is in fact the same letter as that other one you provided, Can modern day Greeks understand and read ancient scriptures in ancient ruins (Like this one?)

Since you’ve provided a clean transcription I don’t have to squint at, happy to do it:

We want to increase the honours of our sister Queen Laodice even more, and we consider this most necessary, not only so we can live with her caringly and like a guardian, but also because we want to act piously towards sacred things. And we are taking care to do what we should do and what it is right to do, to meet her needs, with family-like love. And we have decided, just as head priests commemorating us have been set up during our reign, that head priestesses commemorating her should be set up in the same places, who will wear golden crowns bearing her image; and they will be enrolled in the covenants, along with the head priests of our ancestors and our current head priests. So since Laodice was brought up in the places under your rule, let everything written above be carried out, and let copies of the letters be written on columns and set up in the most conspicuous places, so that now and forever our favour to our sister should be made clear through these.

119th year of the Seleucids, month of Xanthicus.

Another cultural Orthodox here. I too was allowed beer with lemonade or watered down wine as a kid. I was also told I couldn’t be a sinner as a kid, because I didn’t have the capacity of mature judgement yet. (The legal system acts in a similar way.)

I presume your parents are just using sin to discourage you without having to explain themselves. Greeks in their position might say krima “shame”, maybe even krima apo to Theo “shame according to God”. But I’d be surprised if they used the term amartia “sin”.

I tied with Peter Flom, which surprises me.

That was awesome fun, Jordan. Let’s do it again some time!

You wanna know how it feels like to write 1000 answers? 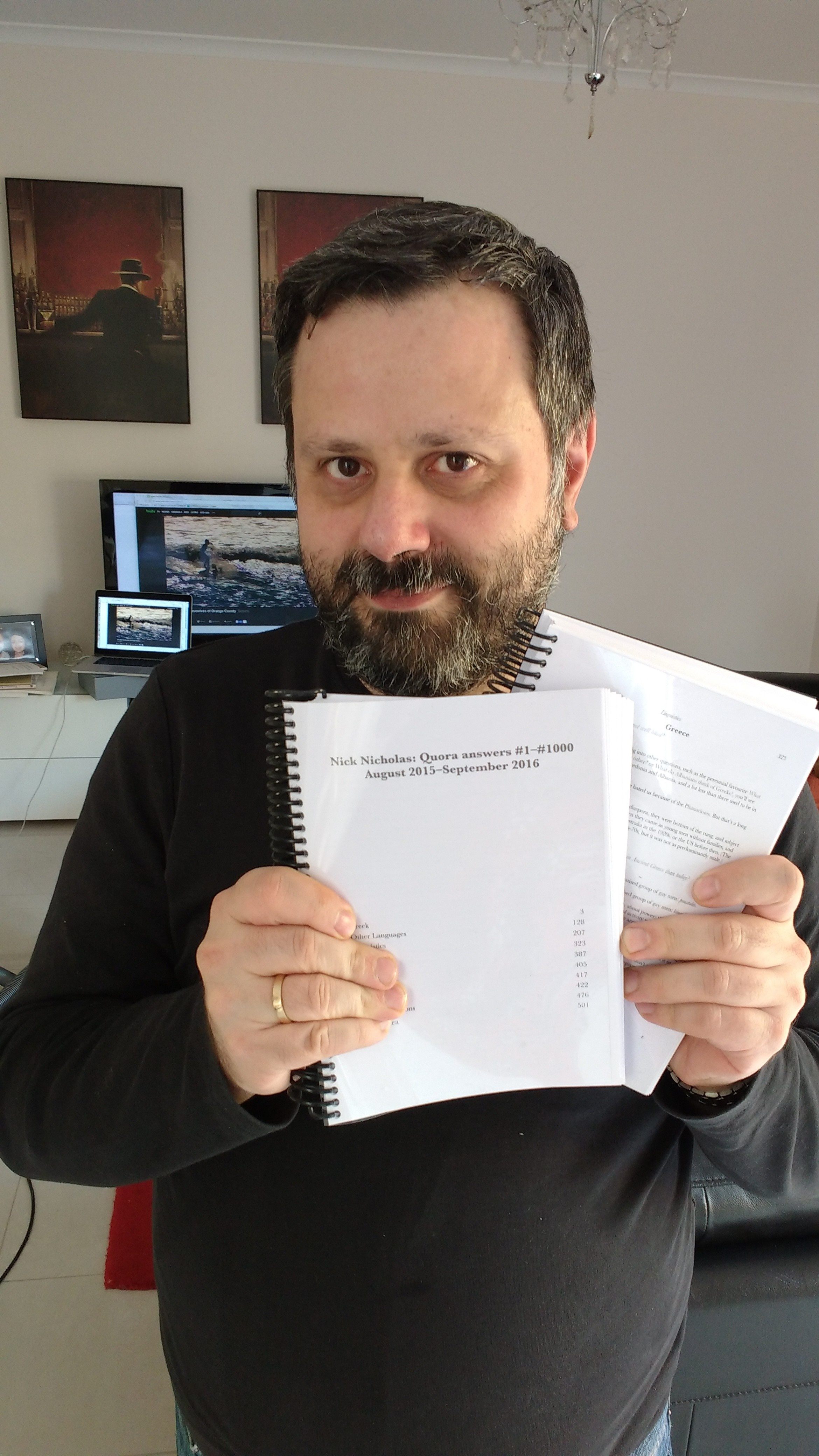 It feels like I should be grateful to Brian Bi for t3nsor/quora-backup. Which has made THIS possible: 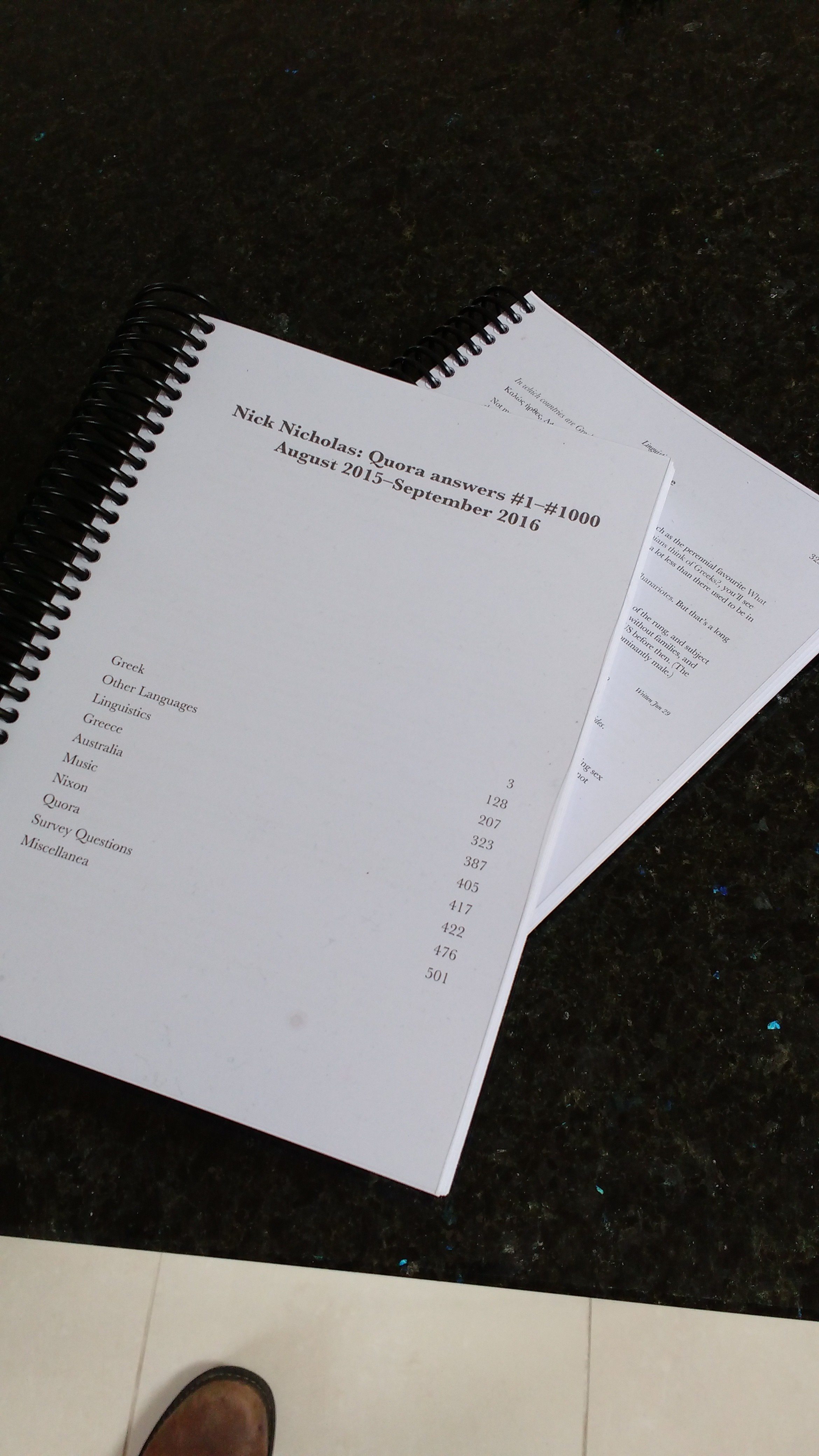 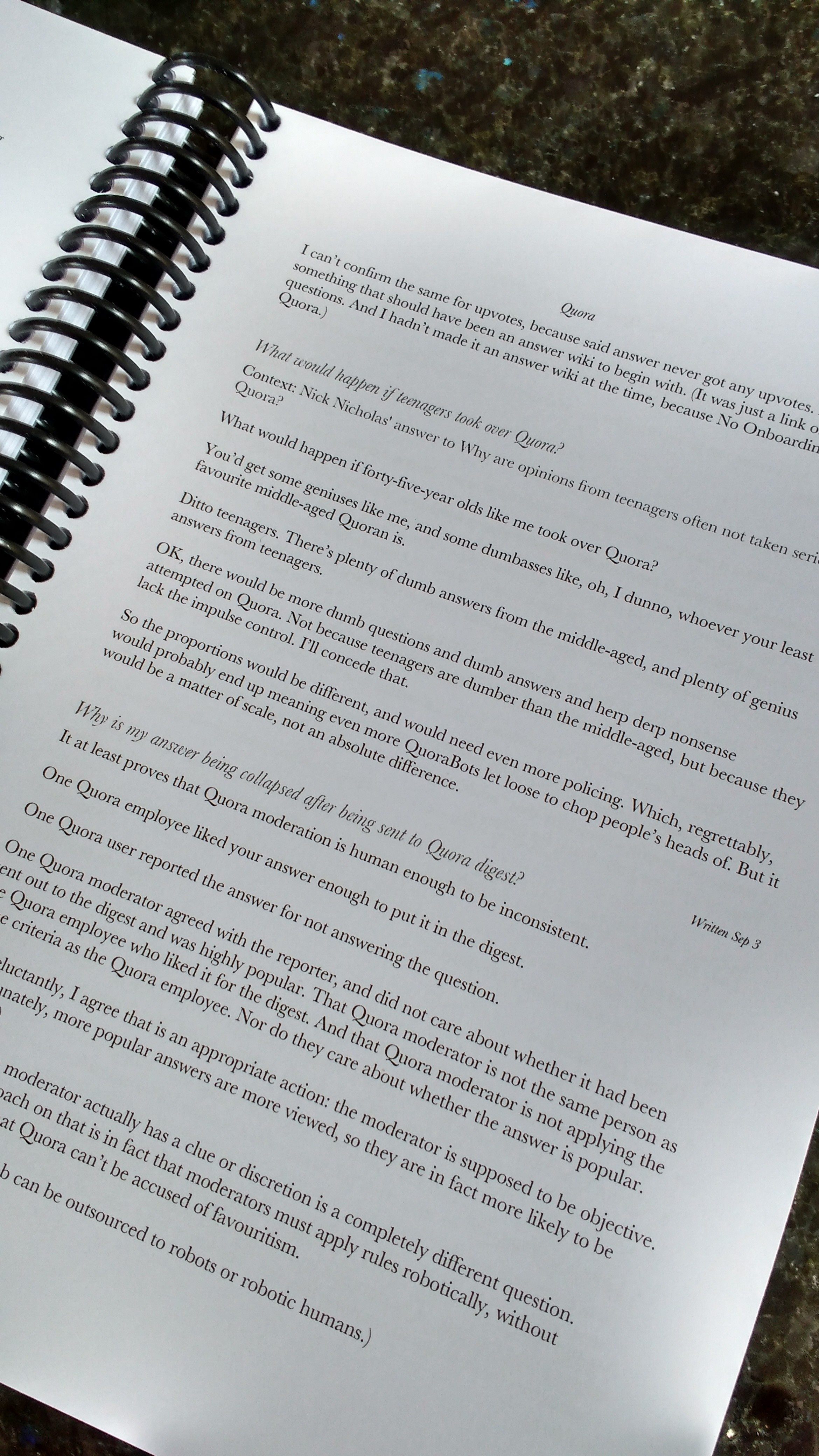 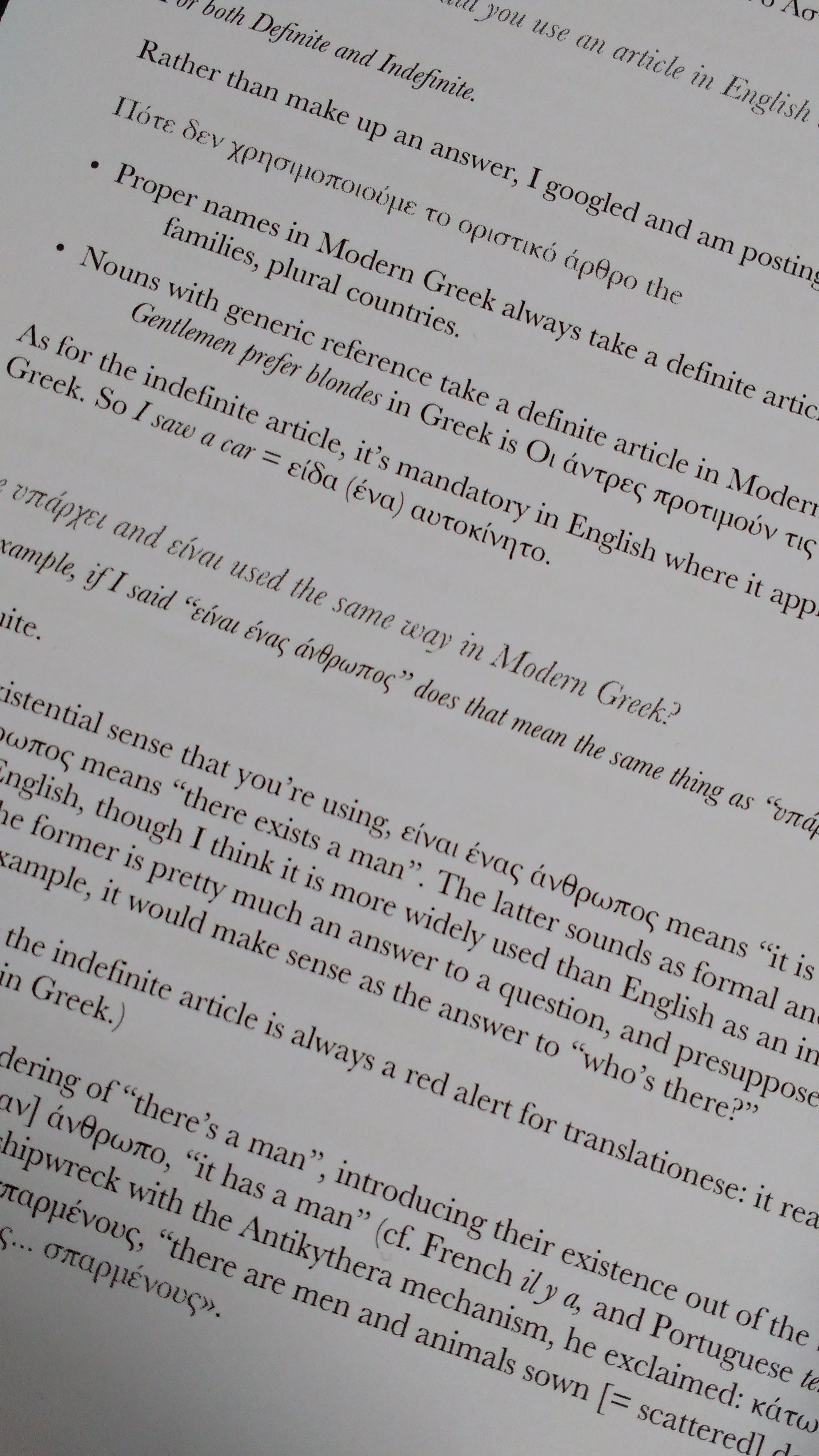 The plain Greek is a bit lumpy, but the italics make up for it. Almost.

Seriously? I do feel a sense of achievement. Some of those answers have been throwaway, but most of those answers, I’m proud of, throwaway or not. They’ve been me. And they’ve captured some good journeys.

Following Uri Granta’s lead, a few stats about the journey, although I’ve focused on different things.

The distribution of topics on the profile page is a sledgehammer, and I prefer to have a priority list of narrower topics. The topics list also doesn’t capture topics you don’t know about, but write about anyway.

… That’s a lot of Other; and I really couldn’t get it any more granular. 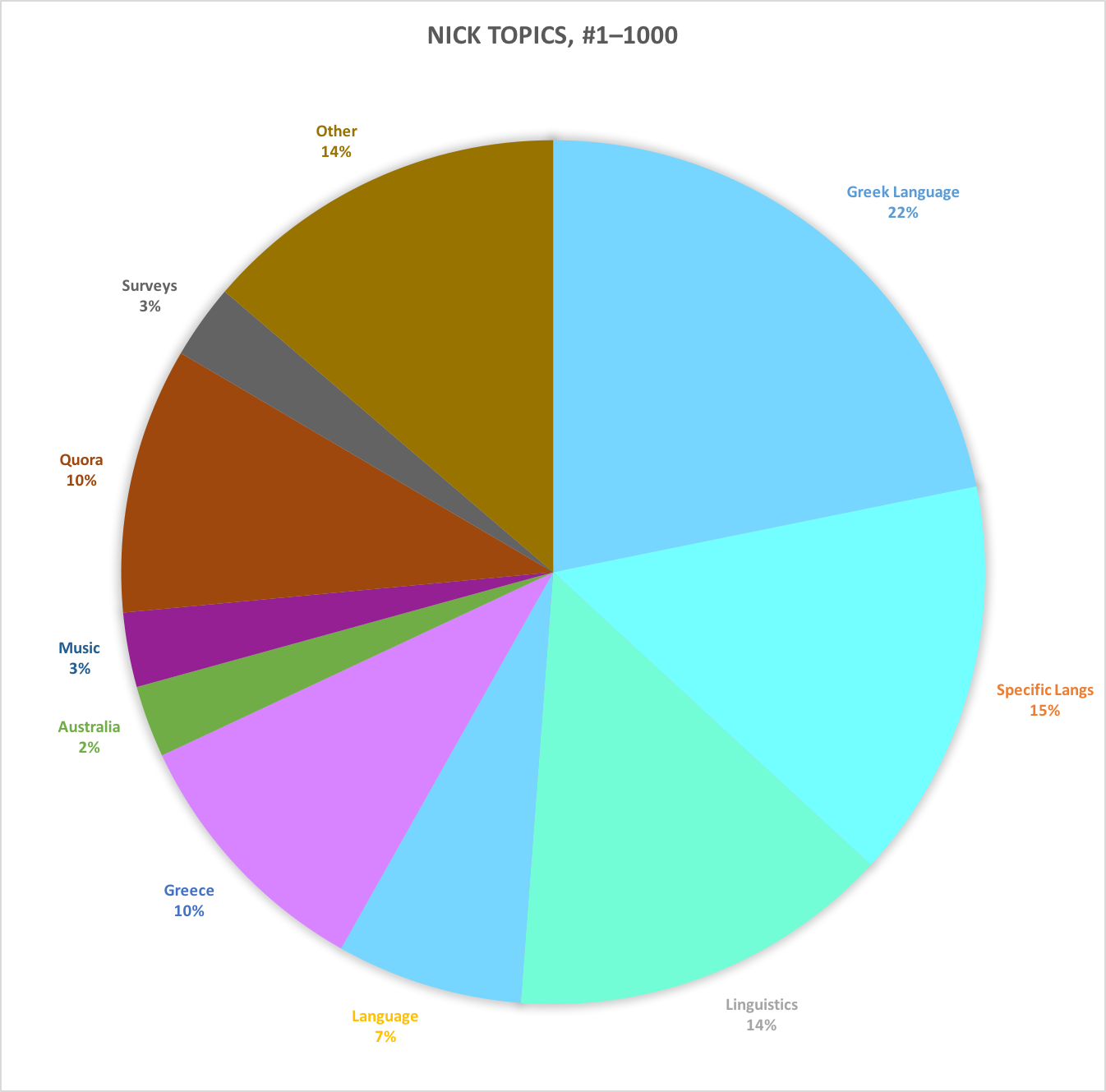 At least the blues in the pie chart confirm it: I’m still a linguist.

The graph of the addiction seems to point to January and June: 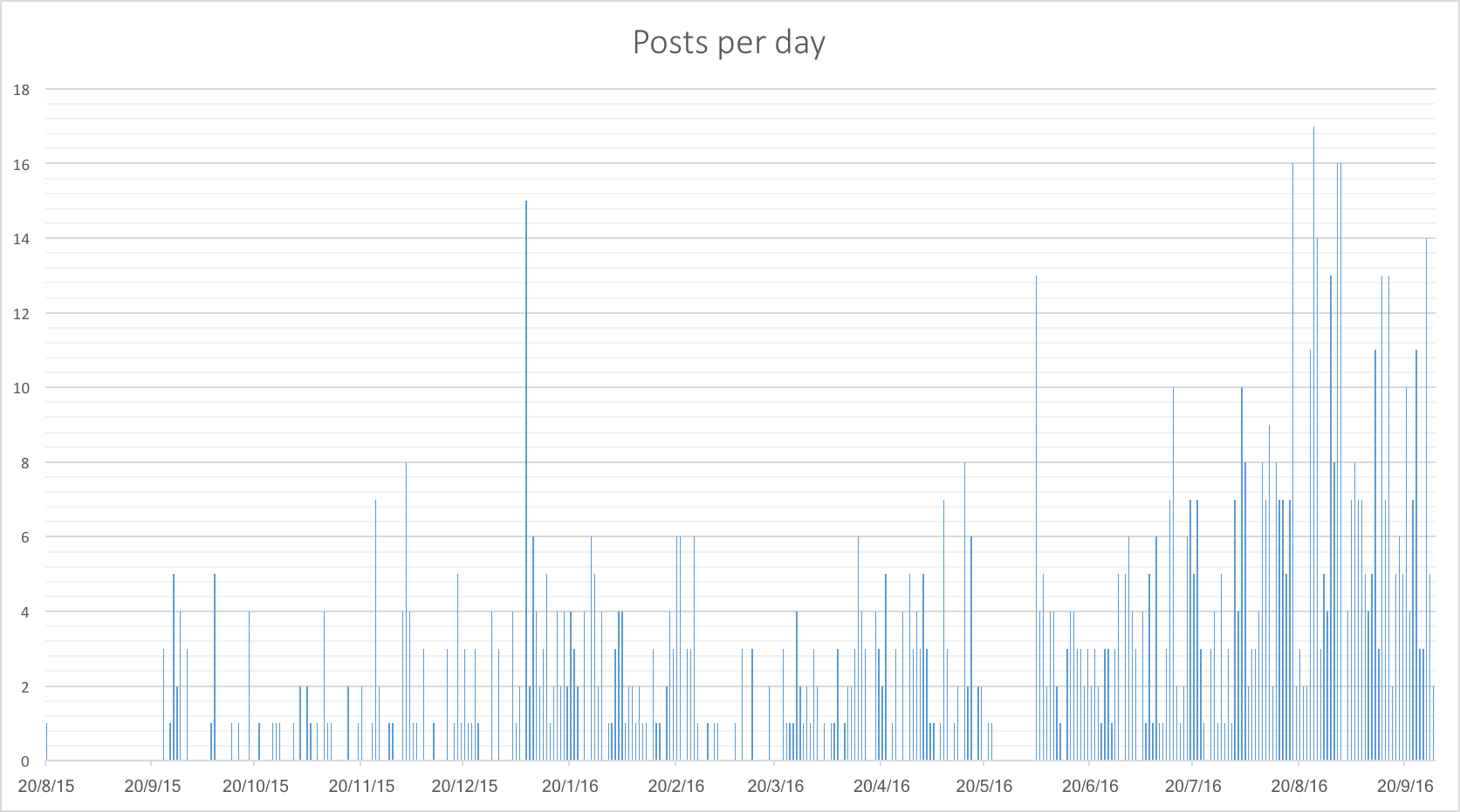 And how loquacious have I been? 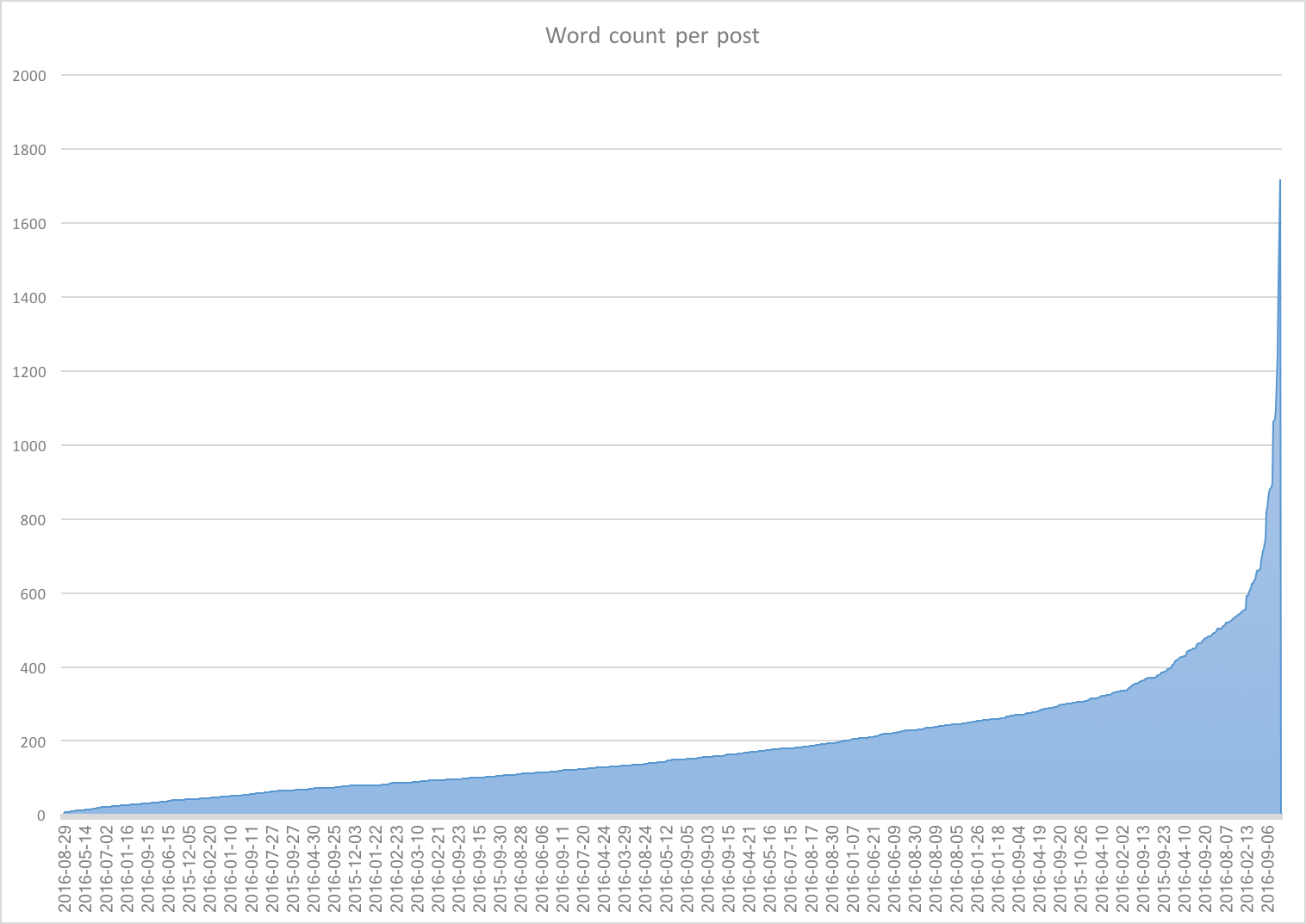