Brian van der Spuy is quite right that the extensive orchestral palette is in line with Mahler’s desire to encompass the world in his symphonies.

Howard Levitsky’s answer, featuring Gershwin’s car horns, is ironic, given the contemporary reaction to the cowbells in Mahler’s 6th: 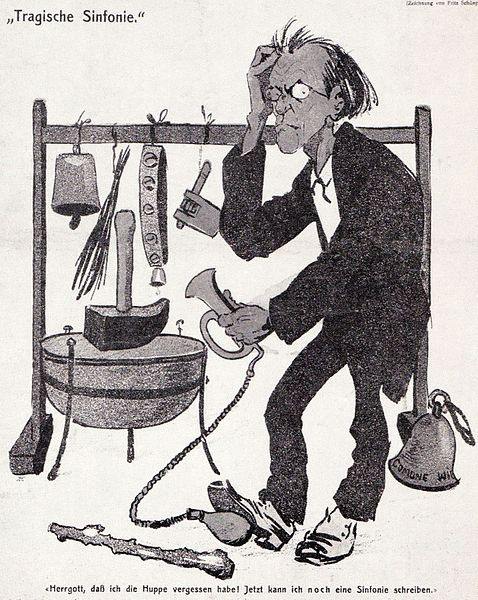 The cartoon was published in the Austrian/German magazine, Die Muskete (The Musket), on 10 January 1907. The cartoonist was Fritz Schönpflug (1873-1951).

Was it helpful? Yes, because Mahler (who after all had a day job as an opera conductor) had a keen sense of orchestral colour, and timbre is a major component of his musical meaning. If offstage bands and mistuned violins were part of the palette he used to communicate, then cowbells and harmoniums were too. And Mahler always used his colours with great delicacy, it wasn’t a wall of sound.

Was it effective? Personal opinion follows:

(ου is written as the ligature ȣ.)

More prosaically, it is now known in English as Phanar Greek Orthodox College, and in Turkish as Özel Fener Rum Lisesi. It was established in 1454 and was the premier institute for schooling of Greek Orthodox students in the Ottoman Empire. The date refers to the current building, which Wikipedia informs me was constructed in 1881–83.

Its fame endures in Greekdom. In fact, the Greek translation of the Police Academy (franchise) films was Η Μεγάλη των Μπάτσων Σχολή: The Great School of the Cops.

*Looks at profile of OP Tia, hoping for a hint*

… You’re Australian, and in fact live on the same train line as me (my wife used to live in Berwick).

Well, shit, Teah, that doesn’t help me at all. You’re Australian, so that name could be from anywhere. 🙂

Names ending in -ah? That suggests either English (and a recent phonetic spelling in English at that), Hebrew, or Malay.

The name Teah is a Greek baby name. In Greek the meaning of the name Teah is: Goddess; godly. Also abbreviation of names like Althea and Dorothea. The mythological Thea was Greek goddess of light and mother of the sun; moon and dawn.

Well, no, Teah is not a Greek baby name. Thea is the Greek for Goddess, and shows up in Dorothea (Gift of the Goddess—or actually, feminine version of Dorotheus, Gift of the God). And what Greek goddess of light and mother of the sun?

It’s almost like you can’t believe anything you read online any more.

So if Teah is meant to be Thea, someone at some time was sydlexic.

Teah is a spelling variant of the name Tia (English).

Tia: The name developed as a short form of names ending in ‘-tia’, or names starting with ‘Tia-‘.

That at least looks more plausible to me.

Teah (Girl): All about the name Teah

So rare and recent.

The only instances under Teah in Wikipedia are two Liberian soccer players, one with Teah as a first name, one with it as a surname. If you don’t have any Liberian heritage or associations, OP, that’s likely a coincidence; it’s a short name, after all, so coincidences are bound to happen.

That’s what I’ve got, Teah. Nice to have made your acquaintance!

EDIT: Thank you Janet Renner for staying on the case.

Well, I found out who the mother of the Sun was supposed to be: Theia. Still not buying it: she may have been a big deal to Hesiod, but she was pretty obscure all round.

Tea (given name) shows that Croats, Bosniaks, Georgians, and Finns have the name.

As Janet points out, Téa Leoni was big when Teah Petrušić would have been born (and she’s big again now). So quite a likely source for the name Teah.

Thea (name) is explained as “short for Theodora, Theadora, Dorothea, or Althea (also spelled Elithea)”. If the Téa is meant to be Italian (with the acute indicating the pronunciation), I can see it as short for Dorotea. If Teah Petrušić has a Croatian name, and Teah is an Anglicised namesake of Téa Obreht née Bajraktarević or Tea Palić, well, Dorotea Sutara is Croatian too.

It’s still nice to have made your acquaintance, Teah! And thank you again Janet!

Ctesias’ earlier Indica refers to the country as Indikē, Ἰνδική, as does the even earlier Herodotus.

The former is a country name, “Indus-land”. The latter is a feminine singular adjective, the Indus-ian (country). The same adjective is used, in the neuter plural, in the books’ name: Indika, the Indus-ian (stuff).

Did he? The version I’m familiar with is Boulez saying Shosty was “the second, or even third, pressing of Mahler” (Shostaphobia)

A lot of modern masters that have not severed themselves completely from Common Practice are in debt to Mahler some of the time. There’s several pieces I can think of that are very close to him; Malcolm Arnold’s Symphony 2 Movt 3 is one:

John Adams’ Harmonielehre another (although the minimalism means it doesn’t quite work):

And yes, lots of people compare Shostakovich and Mahler, usually negatively. They’re both emotional in their symphonic oeuvre (although Shostakovich is rather more varied, and decidedly nonlinear in how his style changed). And Shostakovich persisted with the symphonic genre, whereas in the West Mahler was often regarded as the end of that tradition.

Shostakovich is still operating in the same symphonic tradition as Mahler, though. The comment, as much as anything, reflects how unusual that already was by the ’30s.

Of course, there is a clear colonialism subtext going on here. If you were studying, say, Russian or Korean in Morocco, would you feel the same?

I’m assuming that you would not; you tell me. You would immerse yourself in Korean culture, you would go to Seoul often, you would have lots of Bibimbap. But your day to day identity as a Moroccan would not feel compromised. You would still, eh, go to the souk and listen to the oud and eat cous-cous in your day-to-day life; your Korean specialisation would be a side thing, a hobby, not something that compromises who you are.

But you’re not studying Korean. You’re studying the literature of the hegemonic culture of your recent past. By teaching French, you’d be perpetuating the hegemony of French culture in Morocco. You would be joining in with those who prefer to express themselves in the hegemon’s language rather than in Arabic (or Berber).

So what to do?

Well, the fashion in a lot of Western university French departments is postcolonialism, and concentrating on voices in literature outside of France. I (and others) would argue that it’s gone too far, and that completely ignoring the dead white male canon of French literature gives you a curriculum that is all reaction and nothing to react to. But that is possibly not the fashion in Morocco.

If it isn’t, then embrace it. Make sure you include in your studies and your teaching the voices of those who are not part of the hegemonic discourse. In particular, look at how Beurs and Francophone Moroccans are negotiating being between two worlds, and how they use the hegemon’s language to express things outside the hegemon’s culture.

Don’t just focus on Moroccan French writers either—that’s too narrowly parochial: if you just wanted to focus on Morocco, you wouldn’t be studying French at all. Look at Canada, or Haiti, or Francophone Africa, or Vietnam, or the Pacific.

And if you care about Morocco, and want to stay attached to your roots, stay in Morocco, and act as a bridge and an exemplar. If that’s not an option, make alliances with Moroccans wherever you end up.

And remember. The souk really is just around the corner. It’s pretty hard to be deracinated in your own country; you’d really have to make a conscious, continuous effort not to engage with your roots. Your roots are right there, after all.

I’m not above the ego boost of seeing my viewership rise (or see where it baselines to if I’ve been offline for a couple of days). But is it useful as it could be?

Quora is replete with TWs saying how crap the stats page is, and that it should be taken out and shot in the back of the head. To which I can only say, Quora UI misfeatures present a target-rich environment.

But I do check it once a day, just to see if any questions have gone viral, for whatever inexplicable reason. It’s not like I’ll get an explanation out of the current stats page.

Like other reluctant federations, Australia has a constitution that safeguards powers of the states. These have become less attention-grabbing with time; Australians are still parochial about their states, but they’re more excited when that parochialism involves beer brands than legislature. 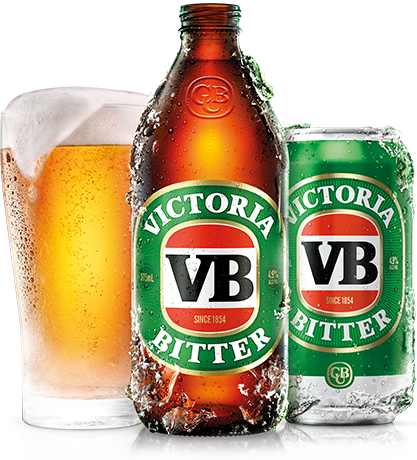 The WWII switcheroo, whereby the Federal Government appropriated all taxation power of the states as an “emergency” measure (not repealed, unsurprisingly) has given the states a lot less heft anyway. And most migrants to Australia, my parents included, scratch their heads at federalism, and ask “why do they keep the states around?”

The states do run a lot of day-to-day stuff that isn’t as visible as federal politics, but is likely more pervasive. And the states would in fact be within their rights to adopt an established religion, and do all sorts of other things the constitution doesn’t enumerate. But we have not had much of a discourse of states’ rights. The most visible it gets is the annual haggling over money handed out from Canberra (the Feds hand back to the States the money they can’t raise on their own).

The closest we have is resentment at the centre, most overt in the states furthest from Canberra, Queensland and Western Australia, which maps to states not wanting to be told where their money goes, or how to run their affairs.

Regional Queensland politicians, for example, have tried to cast Marriage Equality as Federal Interference—which I guess is the closest to States Rights US-style. You could argue that those politicians are at odds with the population of their own state capital. To which they will answer that if they had their way, they’d secede from Brisbane anyway. The ACT, on the opposite side, passed marriage equality legislation, which was struck down by the High Court—because over here, marriage is a federal issue, not a state/territory issue.

But no, not highly visible.

(I suspect I’ve got a lot of this wrong, and I request Tracey Bryan to post her own more correct answer.)